You have been saying to us that we need to be in with the big boys and develop a treatment.

Likewise You often ask why is it so slow for treatments to be delivered. This is because of the costs and the slow process needed to develop drugs.

There are about 30,000 genes each of which can make a protein that could be a drug target. Some of them will be useful or MS.

A drug company will Identify a target of interest and will screen a drug library. This maybe over 2 million different compounds. They now use robots to do this, it used to be real people like Roberts who used to do this and they would screen a few thousand to get a few. Very few drugs will enter human studies. To find the one drug that works takes years to do. Pharma can do this and it costs millions of dollars and current estimates is over $1 billion for pharma to do this. To develop 1 drug for MS 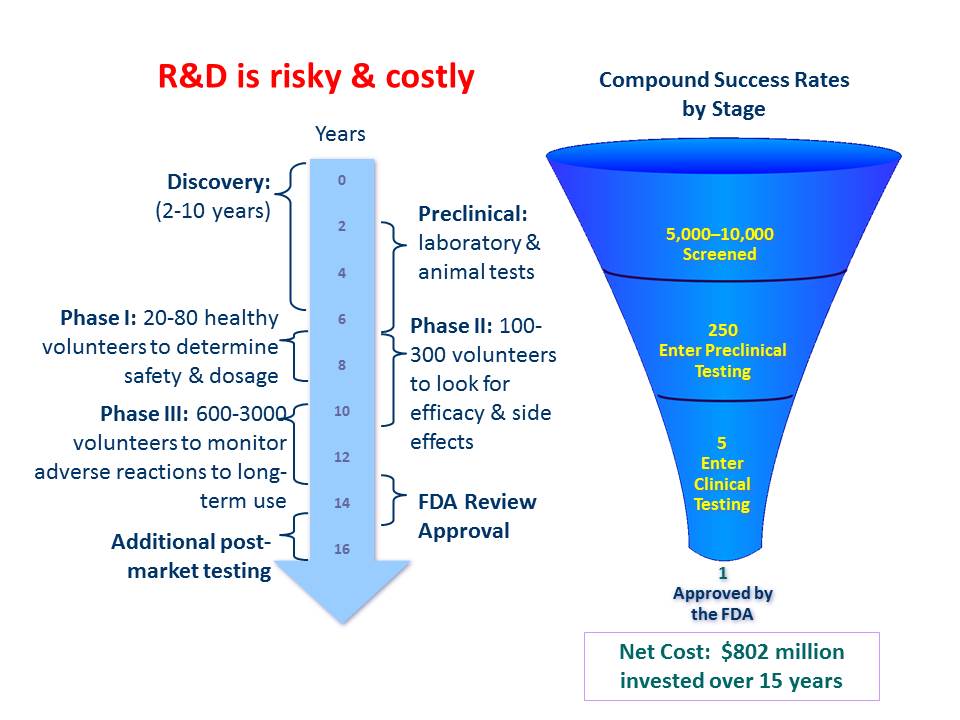 Pharma used to have industry research labs but are closing them down as they realise they can save money. Get rid of their industry labs and buy-in drugs made by academics, because they are not sufficiently business savy and they can pick up a bargain.


Academics think they can save the world and invent and develop drugs. However the reality is very different. Academics are great at developing treatments but they are not so good at commercialising these ideas. In between the initial academic fumblings into the business world and industry-based drug development is the “Valley of Death” Most studies academic fail to attract sufficient investment and they die a quick of slow death in the valley. However, there are two valley of deaths

The first is after drug discovery, where scientists have an idea and do some work to show the idea is a goer and then they publish the information. Many people then move onto the next academic question. But some may get funding from the University to develop the idea which they can exploit this is Seed-funding. Then you may form a start up company to try an commercially develop a drug, because you need to get proof of principal that your drug is active and safe in animal models and show that is safe in humans. This costs a lot and so most academic ideas fall into the Valley of Death and never develop to a stage that where pharma shows growth an maturity and develops into phase II and phase III programmes that pharma will develop.

Another Valley of death is for academic neurologists who are great at doing trials but then what. They do a phase II/phase III trial but the regulatory hurdle means that they can not afford to do the next trial without pharma support or they haven’t got the support to deliver what the regulators want and so the project flounders and fails.


Without investor Angels to help Cross the Valleys of Death many academics will fail to develop new drugs and this is why pharma is one of the only games in town when it comes to drug development, sometimes academics become academic entrapeneurs until they can get pharma interested