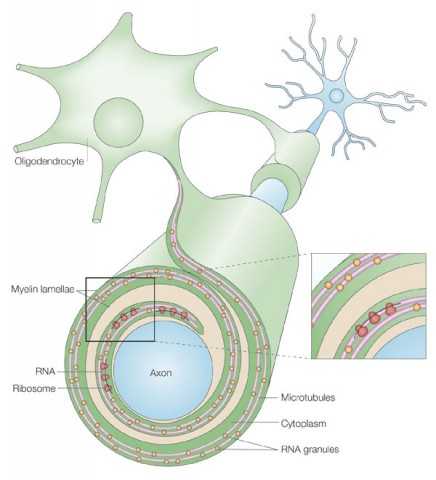 It has been thought that a growing myelin sheath winds around the axon by an advancing inner tongue underneath the previously deposited membrane in the centre of the myelin segment”. There is the transport of membrane from a secretory pathway leading to the tounges.


In this study it is demonstrated that: (1) on reaching an axon, the oligodendrocyte process splits in two (bifurcates) with each of its arms embracing it with a slight overlap and probable fusion at the opposite end; and (2) myelin membranes are preformed and packaged as tubules into specific organelles – myelinophore organelles – within the Oligodendrocyte, transported and assembled by a building block fusion process inside an oligodendrocyte.  This is an interesting new concept and I will return to this once a review is written makes some diagrams as it will make it easier to explain

I am sure MS Discovery Forum will have their team of graphics people on this right Bob?