#MS Research. #Remyelination its easy in animals, do neuros mess up the animal data with their trials

Blocking LINGO-1 has been shown to enhance remyelination in the rat lysolecithin-induced focal spinal cord demyelination model. We used transcranial magnetic motor-evoked potentials (tcMMEPs) to assess the effect of blocking LINGO-1 on recovery of axonal function in a mouse lysolecithin model at 1, 2 and 4weeks after injury. The role of LINGO-1 was assessed using LINGO-1 knockout (KO) mice and in wild-type mice after intraperitoneal administration of anti-LINGO-1 antagonist monoclonal antibody (mAb3B5). Response rates (at 2 and 4weeks) and amplitudes (at 4weeks) were significantly increased in LINGO-1 KO and mAb3B5-treated mice compared with matched controls. The latency of potentials at 4weeks was significantly shorter in mAb3B5-treated mice compared with controls. Lesion areas in LINGO-1 KO and mAb3B5-treated mice were reduced significantly compared with matched controls. The number of remyelinated axons within the lesions was increased and the G-ratios of the axons were decreased in both LINGO-1 KO and mAb3B5-treated mice compared with matched controls. These data provide morphometric and functional evidence of enhancement of remyelination associated with antagonism of LINGO-1. 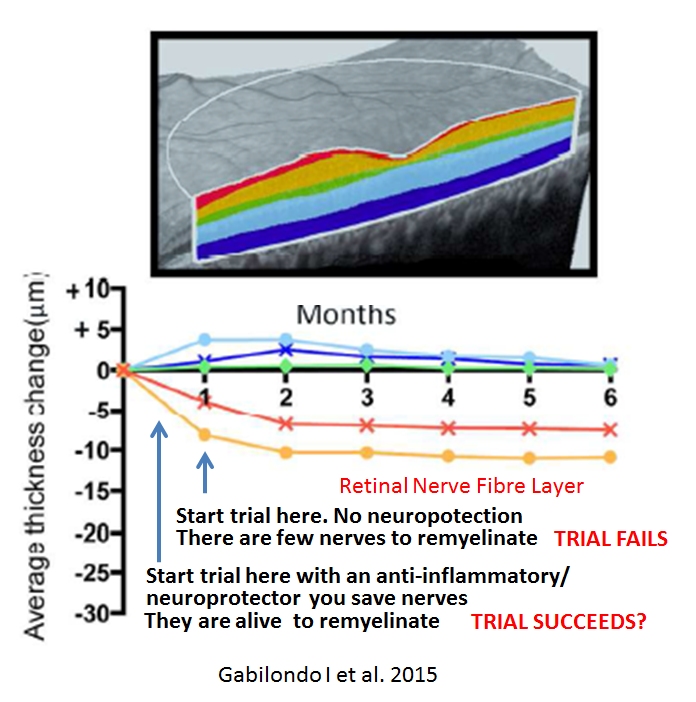 So this is more evidence that anti-LINGO-1 can promote remyelination and shows that if you know what is happening you can get things to work. This is shown in the animal studies where things are optimised. But then it comes to humans, it all falls to pot.

Word on the street or should I say word on Wall street as it is the financial markets who hear first, is that anti-LINGO-1 failed (with proviso) in the optic neuritis trial.

The trend for delay in the visual evoked potential was reported (see links in posts above) to be quicker than the placebo with P=0.0504. However this is greater than P=0.05 and so based on what we have been taught it is not statistically significantly different and so you accept the hypothesis that anti-LINGO-1 had not effect on remyelination. (Is this an error when you accept the null hypothesis that there is not difference in treatments, when you should reject the null hypothesis).

However I am more optimistic that the trend could have been real, although I think an antibody is not the best way to approach this particular problem.

Why I am I optimistic?. If you have nerves left to remyelinate then maybe it would work. In the anti-LINGO-1 study there was no evidence of saving nerves (changes in retinal nerve fibre layer (RFNL) thickness. These nerves are lost as a consequence of optic nerve damage. So adds to the failure of the trial.

Now we need to look at the recent study by Gabilondo et al. (Diagram above).  With that in mind I think they got the result that they should have got a relative failure to save nerves.

So if you start your trial a month after the attack, which they did with the anti-LINGO-1 (SEE the diagram above), the nerves are largely already dead before you start, so there is not much left to remyelinate. TRIAL FAILS.

Furthermore if you do nothing to stop the inflammation or do not give neuroprotection to save the nerve. Then the nerves continue to die and you have nothing to remyelinate and the TRIAL FAILS

Animal studies get called a load of rubbish by Neuros because of the failure to translate. However, one can ask is the failure to translate due to the action of pharma and neuros not designing the trial to optimally detect an effect, Pharma don’t want their drugs in trial with another drug, but sometimes combinations are what is needed.

A remyelination trial will always not be truly informative unless we stop the inflammation. This may be enough to allow repair. Likewise the animal studies have yet to show what happens when there is chronic demyelination with gliosis. Can these lesions be repaired? This is what you want to know, otherwise is it going to be more yet treatments for new lesions and relapsing MS.