The Charcot Project is alive and kicking. #CrowdSpeak #MSBlog #MSResearch

“The first study done under the Charcot umbrella, the INSPIRE or raltegravir trial, finished last year. Our University or sponsor of the study will not allow us to analyse the results until the database is locked. Unfortunately, these are the rules that the MHRA (The Medicines and Healthcare Products Regulatory Agency) put in place. We are currently sitting on our hands waiting for the database lock. It takes about 6 months for the sponsors to check all  the data, resolve all the queries and double-enter the data into a database. We are as frustrated as you the wait, but we will let you know the results as soon as we can.”


“For those who don’t follow the blog regularly will have heard that we have been looking for a crowd funding partner to take on the task of raising funds for a second proof-of-concept trial that is Charcot 2. You the community suggested crowdfunding, voted on the project (Charcot project vs. ZEUS Trial), given it a name (ARTEMIS – Anti-Retroviral Treatment for Epstein-Barr Virus in MultIple Sclerosis) and you are now helping resolve questions about its design. The good news is we have found a Crowd Funding partner called CROWDACURE; or to be more correct they found us. We have been impressed by the level of professionalism and dedication of the CrowdaCure team and it will be a pleasure working with them. We don’t think we can launch the crowd funding campaign until we have finished designing the protocol, costing the work and getting it peer-reviewed.” 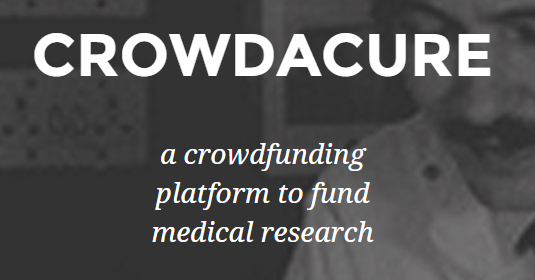 “The following is your feedback on some of the inclusion and exclusion criteria. You want the study to take place in allcomers, i.e. MSers with both relapsing-remitting and progressive MS, you are undecided on an age cut-off and whether or not it should be added onto existing DMTs. As this is a proof of concept study looking at the impact of antiviral therapies on viral loads it is not that relevant what type of MSers are studied. However, we will have to exclude MSers on DMTs with known antiviral activity, i.e. interferon-beta and MSers with low white cell counts (leukopaenia or lymphopaenia); we need white cells to do our HERV assay. The latter will probably exclude MSers on fingolimod, those treated with alemtuzumab and some others as well.” 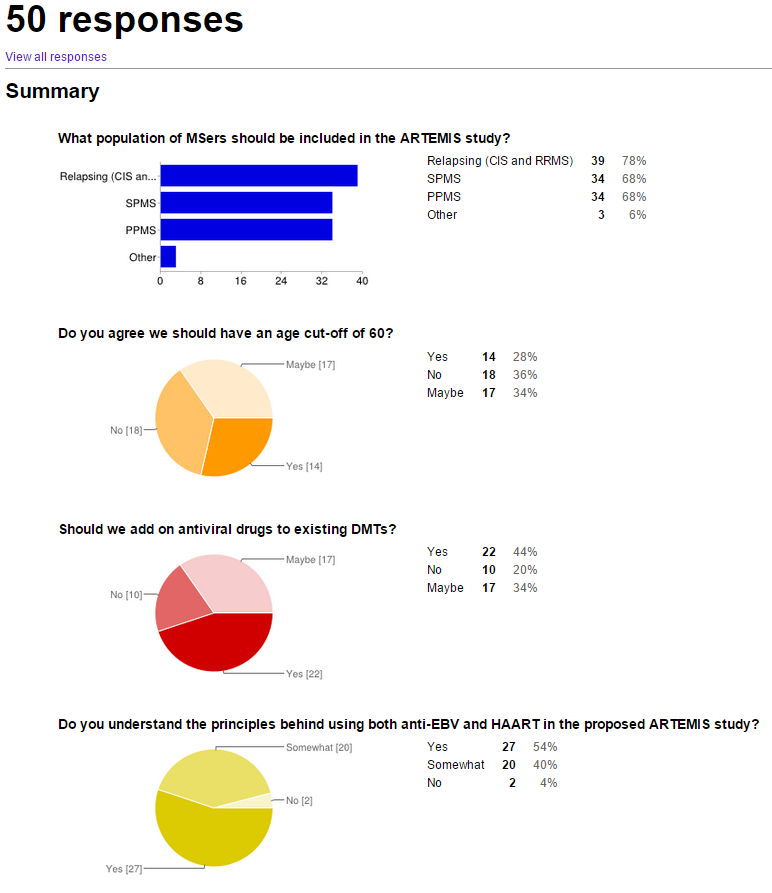 “We love the name ARTEMIS as it is the name of a Greek moon goddess often portrayed as a virgin huntress. The primary aim of the Charcot Project is to hunt down the viral cause of MS; so having a trial named after a huntress is appropriate.”

“Please note that there will be some aspects of the trial that we will not be able to ask for your input; simply because of the way protocols and studies are designed. For example, the choice of HAART. Professor Gold has a rationale for choosing a particular combination of anti-retrovirals based on their efficacy and penetration into the central nervous system. As I write this he is trying to source a supply for the study. HAART is expensive and we are hoping to get one of the large Pharma companies who market anti-retrovirals to donate the drugs for this trial.”

“Some may ask what is the rationale for doing this study? There is emerging evidence that EBV and HERVs (human endogenous retroviruses) are involved in MS. Some of us in the MS community are of the opinion that EBV causes MS and that if you can prevent people becoming infected with EBV you may prevent MS. We don’t know how EBV causes MS. One of the theories that we are investigating is that EBV causes MS via its interaction with HERVs.”


“HERVs are viruses that live in our genome; about 6-8% of the human genome is HERVs. Why do we have so many HERVs in our genome? Evolution has selected for them because they must give us, and other mammals, a survival advantage. For example, one HERV protein is critical for the development of the placenta. Mammals who don’t have a placenta (marsupials) don’t have this HERV. As HERVs are sort of ‘foreign’, the human body has developed intricate ways of detecting them and if they are found to be expressed in a cell the cells immune system flags that it is infected with a virus so that the immune system can eliminate the cell. This so called danger signal is often is what is needed to activate the immune system and if this happens to be an autoreactive immune cell it can trigger autoimmunity. Interestingly, there is a very rare disorder due to mutations in the systems that detect and suppress HERVs in cells. The children with these mutations present with multiple autoimmune diseases indicating that uncontrolled HERV expression can drive autoimmune disease. You may be aware by now that there is emerging data that MSers have evidence of increased HERV expression in the cells of the peripheral blood and possibly in their brains as well. At present we don’t know if MS causes HERV expression or does HERV expression cause, or drive, MS? This is one of the reasons why we have launched the Charcot project.”


“So how do EBV and HERVs relate to each other? It turns out that herpes viruses, in particular EBV, are potent transactivators of HERVs. In other words EBV does something to wake-up the sleeping HERVs  in our genome and increases their expression. This is the rationale for using drugs to reduce EBV activity in the hope they will suppress HERVs, or even better drugs that target both EBV and HERVs.”


“Why HAART (highly-active antiretroviral therapy)? This is based on our anecdotal evidence that MSers who have become HIV positive and go onto HAART do well regarding their MS. We agree that one swallow doesn’t make a summer, which is why we have done other studies to try and confirm these observations. What we have shown is that people who are HIV-positive and go onto HAART have a low risk of getting MS. The longer they are on HAART the lower their risk of getting MS is. We are not the only ones to observe this; the Danes have made a similar observation in their country. The big question is it the HIV virus or the HAART that is lowering the risk of MS? We don’t know.”


“However, once you make an observation like this you can’t ignore it. This is why we have done the INSPIRE trial using raltegravir an antiretroviral drug that blocks the integration of retroviruses into the genome. Raltegravir is a relatively new anti-retroviral, and was only launched in 2009 and only becoming widely used in the UK to treat HIV-1 infection from 2011.  The latter is important because our observations of HAART lowering the risk of getting MS was from the pre-raltegravir period. Therefore, regardless of whether or not the INSPIRE trial is positive we need to test HAART as a potential treatment for MS.”


“I am aware that what I am saying above is complex, but I hope it sets out the rationale and makes the case for using both and anti-EBV drug and HAART in MS and more importantly for using them in combination. The proposed ARTEMIS study below is simply and enabling study to provide us with necessary virological and safety data to make the case for doing a larger efficacy study in MS.”


“As you can see there are still many questions that need answering and we would like your input to answer them. The purpose of this study is to explore whether or not our candidate drugs do what the meant to do to on the target viruses in MSers and to show that there are no major safety issues. Further thoughts please?”