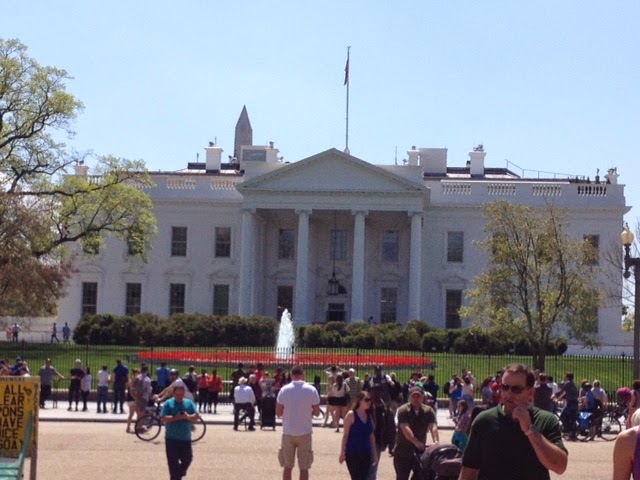 The White House – it really is white! Dulux paint match anyone?

Pathology i.e. anything about the disease itself

EBV-infected B cells are thought to induce meningeal (the region covering the brain) inflammation, which may contribute to cortical damage (the cortex is the outer surface of the brain, conversely the inner portion of the brain is made up of white matter tracts, excluding the deep grey matter).

They performed brain scans and measured the subjects antibody levels to EBV; specifically to its viral capsid antigen (VCA) and nuclear antigen-1 (EBNA-1).

Looking at the p-values the greatest are those associated with focal pathology (T1 and T2), hinting at more severe white matter pathology. But this may be due to the relative difficulty of performing grey matter and cortical volume measures leading to greater errors. Nonetheless, there does appear to be advanced cortical pathology, and chronic T1 black holes in high EBV titre group.

Interesting work, and a good sample size (539 MS patients). We need to see whether there are regional differences by country.

MS-STAT was a randomized-placebo controlled study of 80mg simvastatin vs. placebo. The study demonstrated a 43% annualized reduction in whole brain atrophy rate in simvastatin vs placebo.

Measuring brain volumes and atrophy is proposed as a part of NEDA-4 (no evidence of disease activity), therapies able to prevent or stabilize brain volume loss are currently being investigated in SPMS. 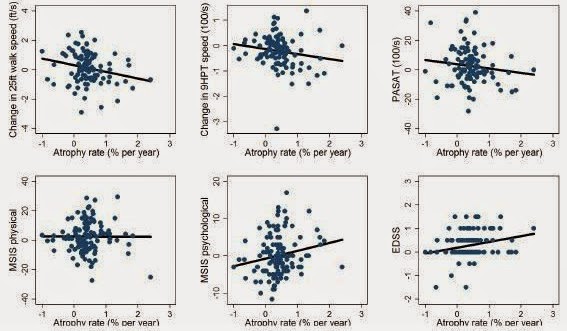 Conflict of interests – several in our group.

Fetuin A is a marker of inflammatory activity, S100B of astrocytic activity and GFAP of astrogliosis.

Not surprisingly, CSF-GFAP and S100B was associated with severe disease independent of disease subtype (see table below). Measuring the two in addition to neurofilaments may prove to be useful prognotically in progressive MS. 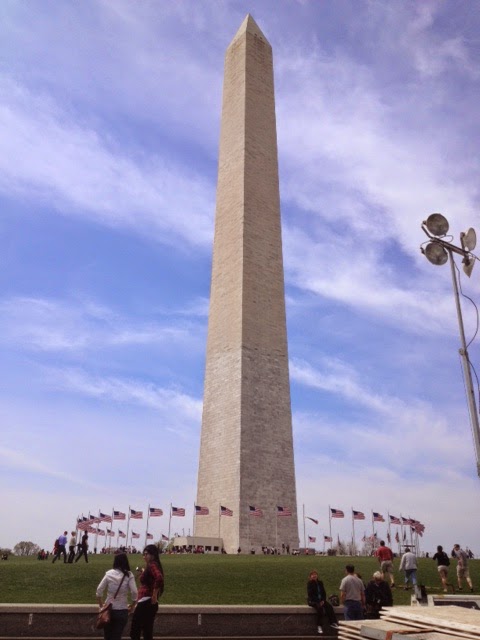 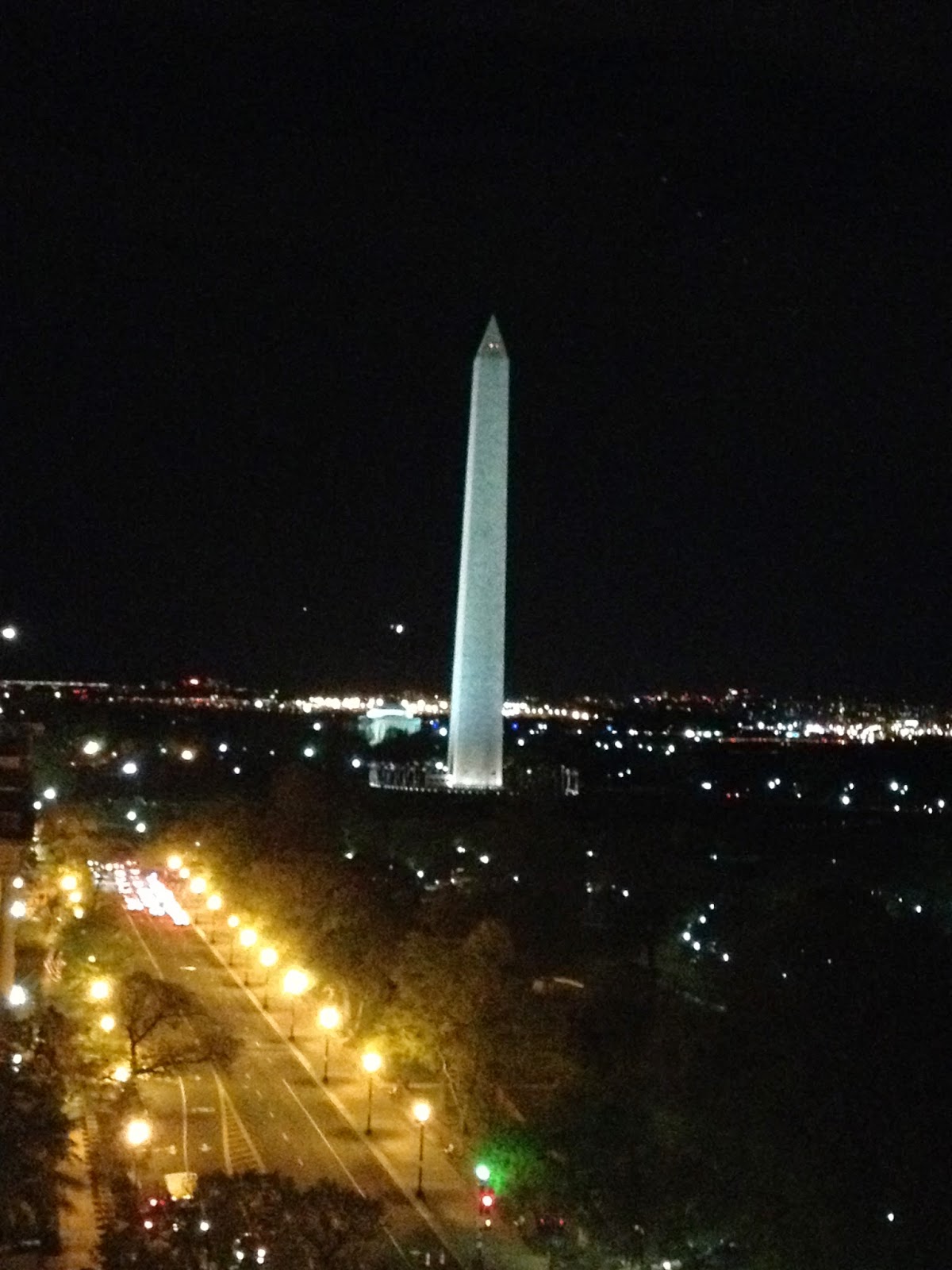 Washington monument during the day and at night from the roof of W hotel.

Alemtuzumab is a humanized anti-CD52 (a protein present in mature lymphocytes) monoclonal antibody, which targets these lymphocytes for destruction. It was the most talked about MS therapy at the conference with several posters looking at various aspects of the drug. I have picked below the poster assessing its efficacy on clinical disability.

In the CARE-MS II study in active RRMS alemtuzumab was superior IFN beta-1a (Figure 1 showing a better EDSS score in alemtuzumab at mth 24 – blue dots). All were invited to partake in the extension study but only the data from those allocated to alemtuzumab in the core study is presented. Participants received repeated doses of alemtuzumab only if they relapsed or had breakthrough MRI activity – 68% didn’t require re-dosing at 4 years.

43.5% (Figure 2 – last column) improved whilst 27.8% remained stable in their EDSS scores from the start of the study to year 4 if they only received the initial two infusions an year apart. But (and this is a big one) 28.7% had an increase in their EDSS score. My take on this is that induction alone is not sufficient and adjunctive therapies may be needed in the interim; whether it be neuroprotective therapies or other immunomodulatory therapies. 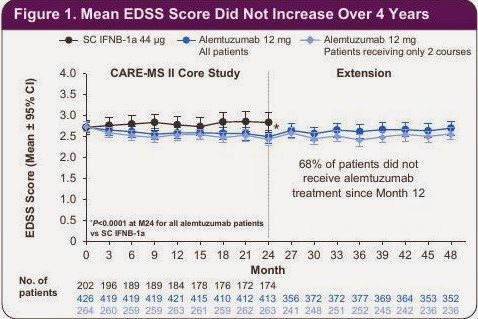 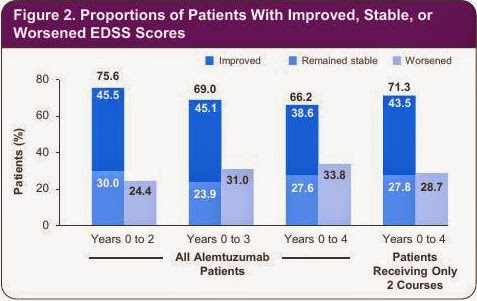 In terms of side effects, thyroid problems are the commonest – roughly just over a third of patients experiencing it. The occurrence of thyroid related side effects peaked at year three from the initial infusions before declining (see figure below). 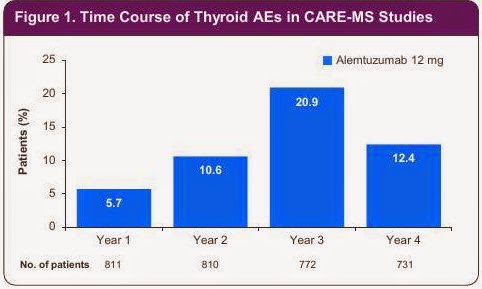 Conflict of interests – several from our group.

2. Effectiveness of switching from natalizumab to rituximab over fingolimod or dimethyl fumarate – poster by Enrique Alvarez and colleagues (University of Colorado)

We know that stopping natalizumab (for e.g. because of JCV positivity) can result in rebound or return of disease activity. The group wanted to test the efficacy of switching therapies, such as rituximab, fingolimod and dimethyl fumarate. Thier wash out period from natalizumab was < or equal to 6 months (on average 0-1 months).

Interesting study, but a huge note of caution; the patients were not randomized (i.e. the switch therapies were not randomly assigned to each patient giving rise to bias in selection), nor are the sample sizes of sufficient number to generalize the findings to anyone around the world. More work is evidently needed in this area. Although promising, I will question the safety of switching JCV+ patients to another highly active infusion therapy – and data is specifically needed in this group (is this ethical to do such a study?).

3. Safety and tolerability of oral RPC1063 in RRMS – poster by RADIANCE trial investigators

RPC1063 is a new version of fingolimod and is a sphingosine 1-phosphate (S1P) 1,5 receptor modulator. RADIANCE is an ongoing clinical trial the group presented the Phase 2 portion of the study.

Low post-dose heart rate in fingolimod is an issue, however, with this latest version the drop in heart rate was modest. During the first 6 hours post dose reduction in heart rate was <2 beats per min from the starting heart rate. Neither was there any clinically significant conduction abnormalities observed. This version may prove to be the best in its class, although we will know more once the study completes.


RPC1063 is a mouthful, I wonder what name will be assigned!

Compared to IFN-beta-1a lowered annualized relapse rates by 45%, reduced the proportion of patients who relapsed by 41%, and reduced the number of T2 lesions by 54% at week 96.

This is a treatment for RRMS as you can see by the figure below greater disease duration (> or equal to 10years) and high EDSS scores (> or equal to 3.5) do not favor dacalizumab treatment. 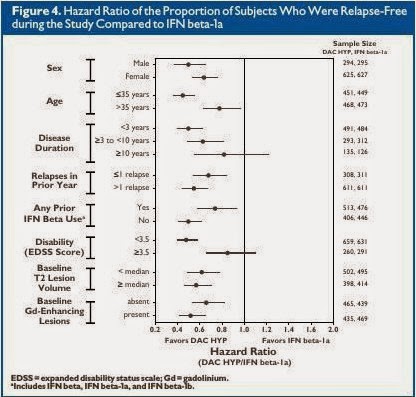 I was slightly disappointed with this study as I thought the data will be better than alemtuzumab but not so. However, head to head comparisons need to be performed and route of administration needs to be factored; as dacalizumab is subcutaneous delivery and may be more suitable for home administration if your nearest MS center is on Mars for instance!

Conflict of interests – several in our group. 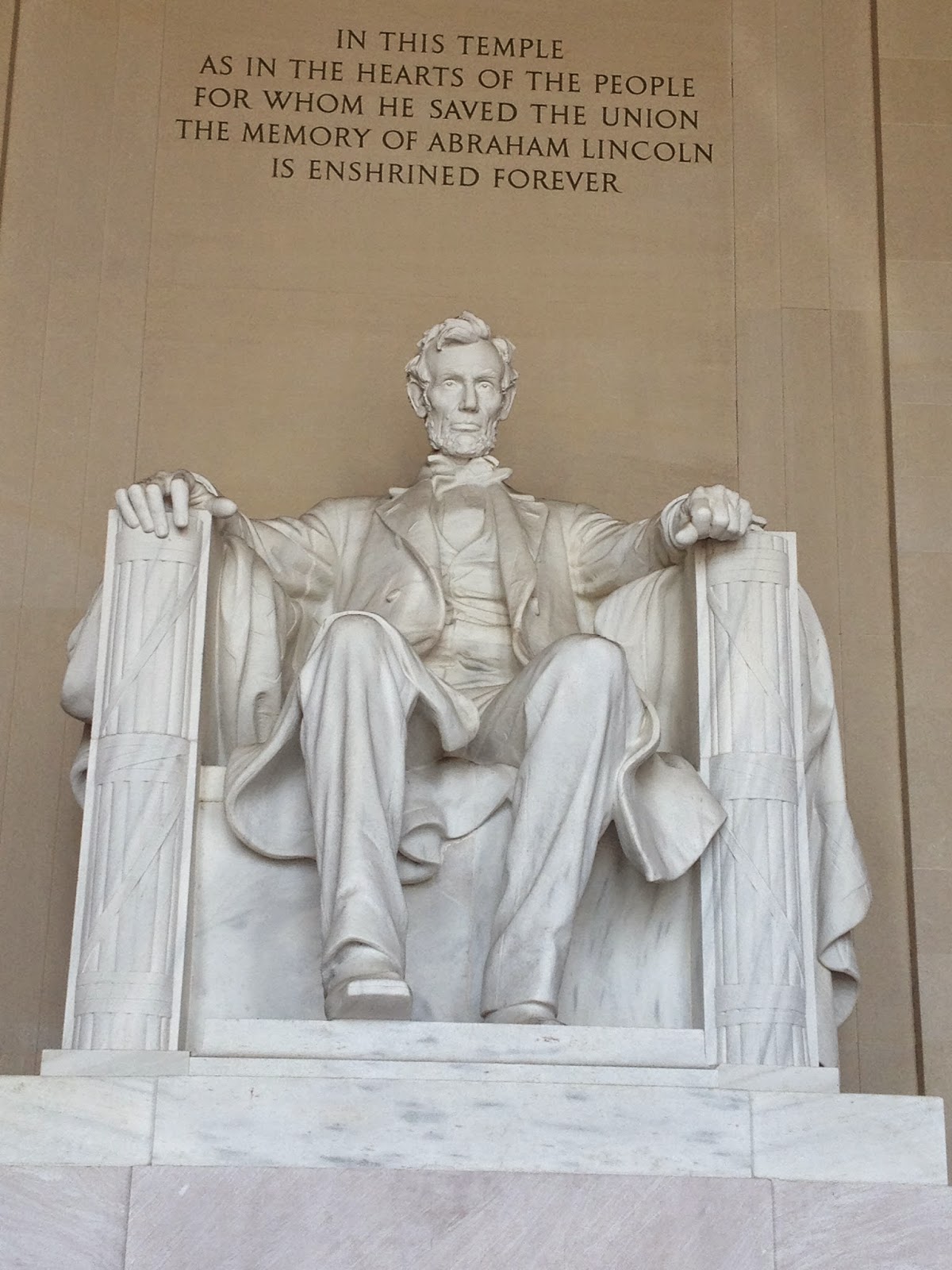 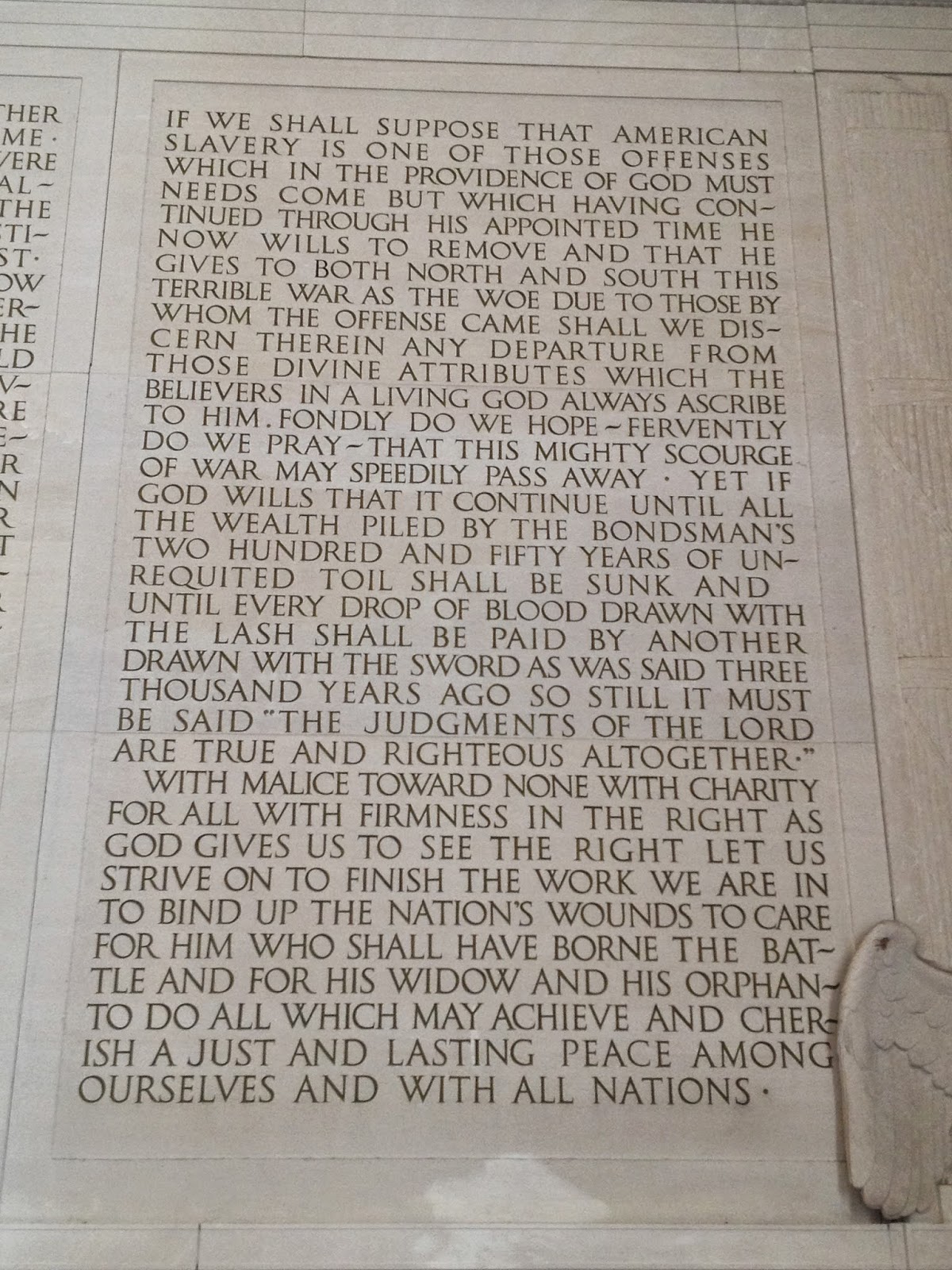 1. Stress burden in caregivers looking after RRMS patients – poster by Jose Meca-Lallana and colleagues (from Spain)

Caregiver burden in those looking after MS patients is multi-factorial, dependent on physical, psychological, emotional, social and financial factors. In this study they found that EDSS score (odds ratio 1.6), time as a caregiver (odds ratio 1.1) and number of medications administered were associated with increased burden. Not surprisingly, they also found the availability of new DMTs has changed the perception of the disease by carers and patients in RRMS (see below). 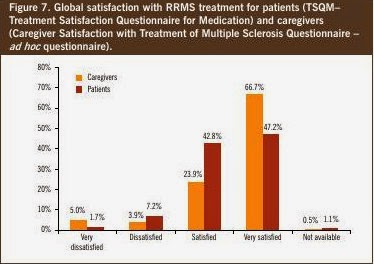 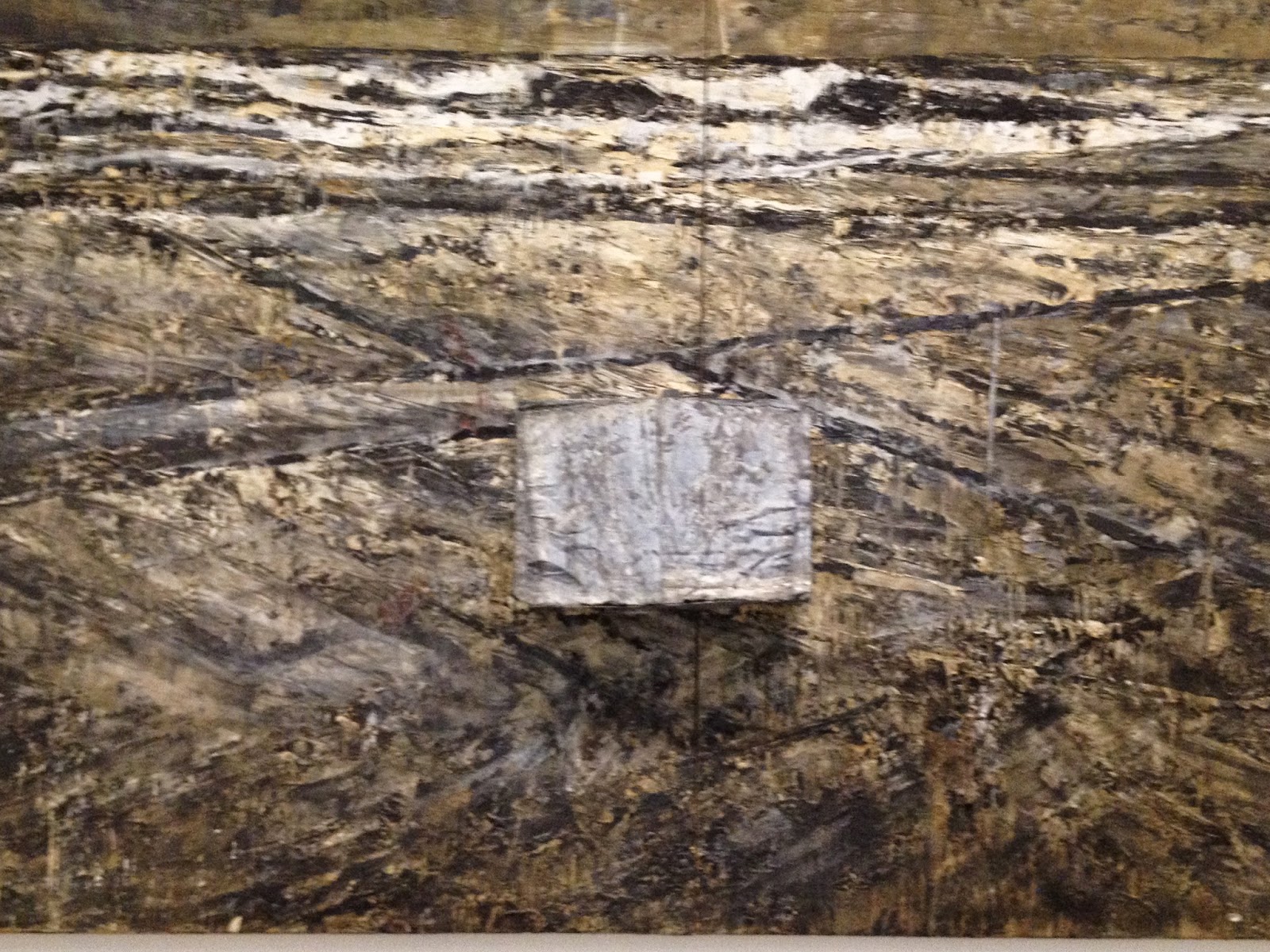 The Book (1979-85), Anselm Kiefer in the Hirshhorn gallery. The unreadable tome juxtaposed against a desolate landscape conveys as sense of melancholy, suggesting the ways in which cultures create and disseminate destructive ideologies through the written word.