Late onset MS; does it change the way we think about MS? #ClinicSpeak #MSBlog #MSResearch

“I am often asked how commonly does MS present in older people. The study below shows that 3.4% of MSers present after the age of 50 with their initial symptoms. In contrast to the established clinical dogma the study below only found 20% of MSers, with so called late-onset MS (LOMS), had primary progressive disease. I have always assumed this figure to be much higher than this. This is good news in that we can offer most of the LOMSers treatment with DMTs as they have relapse-onset disease. I note that a significant number of LOMS PPMSers were reclassified as having SPMS, based on a history of earlier events suggesting a relapse. This is quite a common phenomenon; you make a diagnosis of PPMS and  then when you interrogate the MSer you uncover a distant history of a so called sentinel event suggestive of an initial attack. In one patient under the care of Professor Ian McDonald, who I saw many years ago, presented in his early 70s with progressive MS; when I reviewed his history he had had an episode of blurred vision in his early 20s compatible with optic neuritis. He did not have PPMS, but so called single-attack progressive MS (SAP), which we now classify as SPMS.”

“What all this tells us is that the clinical classification of MS is far from a science and is more an art and an very inaccurate art at that. What we really need to know does this patient have MS and if they do is there any evidence of ongoing focal inflammatory events (new lesions on MRI or actively enhancing lesions). MSers with active disease are likely to respond to anti-inflammatory therapies. In comparison MSers with no ongoing focal active inflammation, but who are progressing clinically or on MRI (accelerated brain atrophy), need to be offered recruitment into clinical trials to see if they respond to therapies targeting, in my opinion, inflammation, neuroprotection and possibly remyelination (see therapeutic pyramid below).” 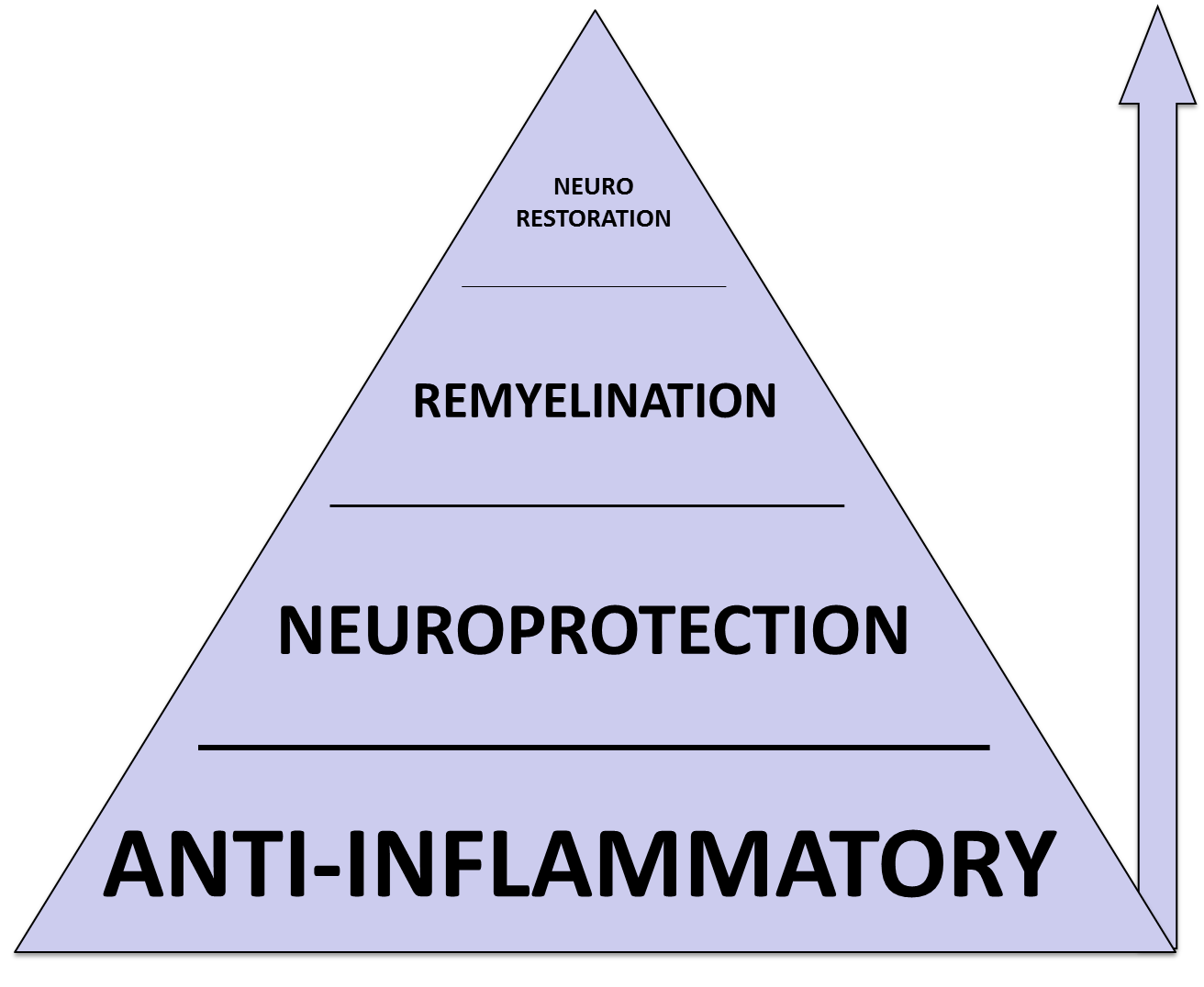 BACKGROUND: Multiple sclerosis (MS) is the most common demyelinating disease, and onset over the age of 50 years is referred to as late onset MS (LOMS). It has been thought that LOMSers will be more likely to exhibit a primary progressive (PPMS) clinical course.


OBJECTIVE: To identify the clinical characteristics of demyelinating disease in patients over the age of 50 years from four different MS centres in the Northern Midwest USA.

METHODS: We reviewed medical records of all MSers seen at the MS centres and identified those who were 50 years of age or more at the time of first spontaneously reported symptoms. We included those who were diagnosed with MS or clinically isolated syndrome (CIS) and excluded MS mimickers. Demographics, initial clinical course diagnosis, clinical characteristics, and any available five-year follow up data were collected. The clinical course was re-evaluated in each MSer with careful questioning regarding any prior focal neurological symptoms that had persisted for at least 48h, not otherwise explained. Those with a prior event who were initially diagnosed with PPMS or CIS were reclassified as secondary-progressive MS (SPMS) and relapsing-remitting MS (RRMS) respectively.