Apparently, it is that they research on Great Apes

In light of ProfGs comments (below), some may wonder where Gabon is

for those who don’t know where the USA is

There are no groups in the UK, who use non-human primates for MS research.


A couple of days ago someone asked in the comments about the fate of Tab008, this is also known as TGN1412 and was a disaster.


Although, it inhibited EAE in mice, anybody with Immunology 101 should have been aware that if you give a T cell mitogenic (makes them proliferate) antibody…..you get a cytokine storm in humans causing the blood system to shut down in the extremities (This led to gangrene). Such an effect could also lead to death although thankfully this did not happen in the TGN1412 trial.


Mice live in bacterial city and can cope with CD28 super agonists like TGN1412 and apparently so could cynomolgus monkeys, used in the safety tests before human studies which lack CD28, the target of TGN1412..oops.


If they had tested the effect of TGN1412 in Chimpanzees, this terrible side effect would have been known.


Which is more disturbing the picture at the top or the bottom? 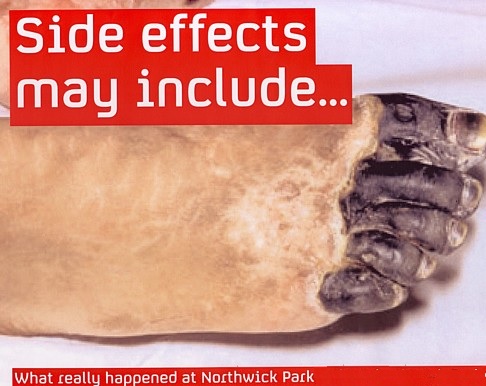 With a bit of thought, maybe both can be avoided.