The central nervous system (CNS) is considered an organ devoid of lymphatic vasculature. Yet, part of the cerebrospinal fluid (CSF) drains into the cervical lymph nodes (LNs). The mechanism of CSF entry into the LNs has been unclear. Here we report the surprising finding of a lymphatic vessel network in the dura mater of the mouse brain. We show that dural lymphatic vessels absorb CSF from the adjacent subarachnoid space and brain interstitial fluid (ISF) via the glymphatic system. Dural lymphatic vessels transport fluid into deep cervical LNs (dcLNs) via foramina at the base of the skull. In a transgenic mouse model expressing a VEGF-C/D trap and displaying complete aplasia of the dural lymphatic vessels, macromolecule clearance from the brain was attenuated and transport from the subarachnoid space into dcLNs was abrogated. Surprisingly, brain ISF pressure and water content were unaffected. Overall, these findings indicate that the mechanism of CSF flow into the dcLNs is directly via an adjacent dural lymphatic network, which may be important for the clearance of macromolecules from the brain. Importantly, these results call for a reexamination of the role of the lymphatic system in CNS physiology and disease. 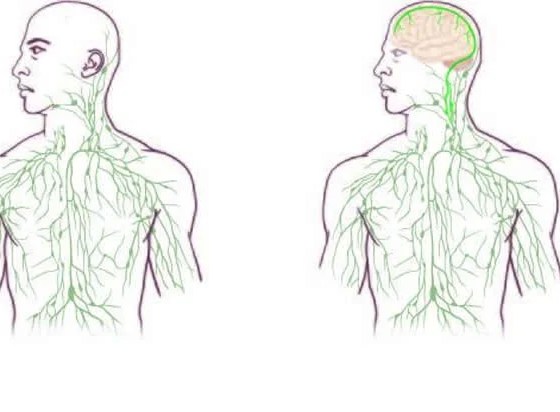 So here we have another paper in a similar vein to the recent paper in Nature. Louveau et al. Structural and functional features of central nervous system lymphatic vessels. Nature. 2015 Jun 1. doi: 10.1038/nature14432. That was discussed previously (click)


It was originally proposed that the brain had no lymphatics so that antigens couldn’t be taken to lymph glands to start an immune response. However, we have known so many years that this is not quite right because we could see brain antigens in lymph glands. Lymphatic vessels were proposed and have been found and will contribute to the glymphatic system of the brain.


Lymphatic vessels are collapsed structures between the meninges (outside of cover of the brain), and if one does not know how to look, they cannot be found. These two groups worked out how to look.


This has nothing to do with CCSVI, which is going round the MS conspiracy theory circuit, and if textbooks need to be updated to include these discoveries they are not going to talking about CCSVI.


Furthermore the brain still has relative immune privileged as the experimental results are not going to be wrong, just the explanation needs addressing and it is still clear that the brain has many features that are down regulated when it comes to immune function.


However, one has to be clear that once the immune response has become activated against brain antigens there is no immune privilege in the brain

The question is; if MS does contain an element of autoimmunity,where does it start in the brain (inside-out) or the lymph glands (outside-in)?


The likely place has always been in the lymph glands because this is the place where the body has evolved structures for that to happen and even if the first event happens in the brain then the targets will be transported into the lymph glands for this to happen.