The transcription factor nuclear factor κB (NFκB) is a central regulator of inflammation, and genome-wide association studies in subjects with autoimmune disease have identified a number of variants within the NFκB signaling cascade. In addition, causal variant fine-mapping has demonstrated that autoimmune disease susceptibility variants for multiple sclerosis (MS) and ulcerative colitis are strongly enriched within binding sites for NFκB. We report that MS-associated variants proximal to NFκB1 and in an intron of TNFRSF1A (TNFR1) are associated with increased NFκB signaling after tumor necrosis factor-α (TNFα) stimulation. Both variants result in increased degradation of inhibitor of NFκB α (IκBα), a negative regulator of NFκB, and nuclear translocation of p65 NFκB. The variant proximal to NFκB1 controls signaling responses by altering the expression of NFκB itself, with the GG risk genotype expressing 20-fold more p50 NFκB and diminished expression of the negative regulators of the NFκB pathway: TNFα-induced protein 3 (TNFAIP3), B cell leukemia 3 (BCL3), and cellular inhibitor of apoptosis 1 (CIAP1). Finally, naïve CD4 T cells from patients with MS express enhanced activation of p65 NFκB. These results demonstrate that genetic variants associated with risk of developing MS alter NFκB signaling pathways, resulting in enhanced NFκB activation and greater responsiveness to inflammatory stimuli. As such, this suggests that rapid genetic screening for variants associated with NFκB signaling may identify individuals amenable to NFκB or cytokine blockade. 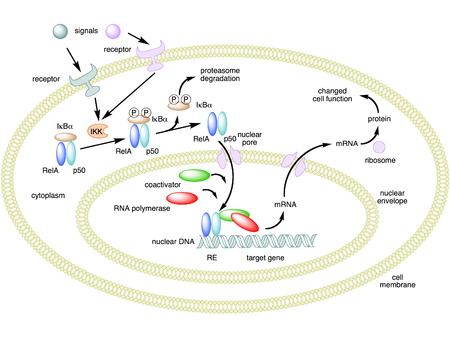 NF-κB (nuclear factor kappa-light-chain-enhancer of activated B cells) is a protein complex that controls transcription of DNA. NF-κB is found in almost all animal cell types and is involved in cellular responses to stimuli such as stress, cytokines,free radicals, ultraviolet irradiation, oxidized LDL, and bacterial or viral antigens. NF-κB plays a key role in regulating the immune response to infection. Incorrect regulation of NF-κB has been linked to cancer, inflammatory, and autoimmune diseases, septic shock, viral infection, and improper immune development. NF-κB has also been implicated in processes of synaptic plasticity and memory.In brief, NF-κB can be understood to be a protein responsible for cytokine production and cell survival.

It has been suggested that laquinimod works by affecting NFκB are there people that give better responses to laquinimod than others?