Beyond a physical symptom: the importance of psychosocial factors in multiple sclerosis pain.


Abstract
BACKGROUND AND PURPOSE:Pain affects around two-thirds of people with Multiple Sclerosis (pwMS). Biomedical treatments show limited efficacy. A recently developed cognitive-behavioural model of Multiple Sclerosis (MS) pain suggests several psychosocial factors may worsen pain and related disability. The current study investigated whether psychosocial factors drawn from this model explain significant amounts of the variance in pain severity and interference over and above measures of disease severity and pain subtype.


RESULTS:All psychosocial factors including distress, negative beliefs about pain and its consequences, and avoidance of activity, were related to pain outcomes, explaining a further 24% and 30% of the variance in pain severity and interference after controlling for demographic and disease variables. Findings were similar for neuropathic and non-neuropathic pain subgroups.


CONCLUSIONS:All pwMS reported significant pain and associated disability even though over 90% were taking pain medication. Psychosocial factors identified as important in predicting pain severity and, to a greater extent, pain interference are potentially modifiable and may be important treatment targets for both pain subtypes. It is estimated that around two-thirds of MSers experience pain, of which 5-32% when questioned perceive as severe. Pain in this particular study is reported as the fourth most common interfering symptom in MS, after fatigue, sexual dysfunction and balance difficulties. I have discovered as opposed to musculoskeletal (muscular, joint pains etc), neuropathic pain (due to a primary lesion or disease of the central nervous system) is particularly debilitating and exceptionally difficult to treat. In this study 50% of those questioned achieved pain relief with the prescribed pain medication (acetaminophen – paracetamol in the UK, anticonvulants, NSAIDs, tricyclic antidepressants, opioids, cannabinoids, compound analgesics, serotonin-norepinephrine reuptake inhibitors).


It has been long appreciated that whilst the MS disease process triggers the pain, a range of personal factors also determine the severity, extent and resulting disability of the pain. These factors include perception, emotional and behavioural responses to the pain, as well as the level of social support. The authors point out that many focus on the pain control or trying to reduce it, often worsening rather than lessening the pain.


In this study, for neuropathic pain, disease variables (MS subtype, current relapse, EDSS etc.) accounted for 16% of the pain severity, whilst the personal factors accounted for a further 20% (even controlling for emotional factors such anxiety and depression in the analysis has overall little effect on the figures).


The authors also found that certain factors were more pronounced in their contribution to perceived pain severity and level of pain interference with life – individuals with “higher levels pain severity and pain interference may have a greater tendency to magnify or exaggerate the threat or seriousness of pain sensations (catastrophic thought processes) and are more affected or influenced by the of their own thoughts (cognitive fusion). Greater pain is also associated with a tendency to avoid physical and social activities when in pain, with greater anxiety and depression, and with viewing pain as persistent over time and having serious consequences. It is also worth noting that persisting with activity (endurance) either showed small negative correlations with pain f no relationship, suggesting that maintaining activity does not worsen pain whilst avoidance does”.


Below is a cognitive (thinking) behavioural model of and treatment for chronic pain published in the article: 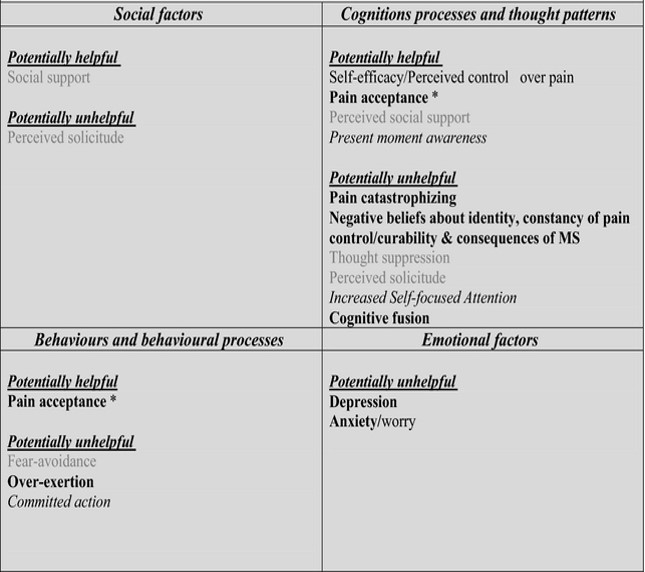 Figure: Interacting biopsychosocial factors felt to contribute to pain severity and pain interference in MS. Bold text are factors that may play an important role in MS, grey text have weaker evidence with findings consistent in only a few studies, and italicized text may play an important role in primary chronic pain but not investigated in MS. * Pain acceptance has a significant behavioural component and is therefore represented in both cognitive and behavioural sections of the model.


Overall, I feel a significant amount of the perceived severity and pain interference is modifiable through programmes such as mindfulness, which is a holistic mind-body based approach that allows a person to manage their thoughts an feelings. It is more than simply sitting on a psychologists couch and talking, but is run by trained occupational and physiotherapists, and psychologists with an in-depth knowledge of the neurological condition involved. Getting access to them is, however, is the hard bit.