Although pain is a common symptom of various diseases and disorders, its contribution to disease pathogenesis is not well understood. Here we show using murine experimental autoimmune encephalomyelitis (EAE), a model for multiple sclerosis (MS), that pain induces EAE relapse. Mechanistic analysis showed that pain induction activates a sensory-sympathetic signal followed by a chemokine-mediated accumulation of MHC class II+CD11b+ cells that showed antigen-presentation activity at specific ventral vessels in the fifth lumbar cord of EAE-recovered mice. Following this accumulation, various immune cells including pathogenic CD4+ T cells recruited in the spinal cord in a manner dependent on a local chemokine inducer in endothelial cells, resulting in EAE relapse. Our results demonstrate that a pain-mediated neural signal can be transformed into an inflammation reaction at specific vessels to induce disease relapse, thus making this signal a potential therapeutic target.

Pain free- Not if you are a mouse?

What causes a relapse, This study says it is Pain

We have had the idea that pressure of the limbs causes a gateway in the 5th Lumbar region of the mouse spine so that white blood cells enter the spine and cause EAE and to demonstrate this they hung mice upside down for months by the tail to show that the gate way could be moved to the front legs.

So in this study they induce EAE in C57BL/6 and they watch them for a year and a half to see if they get EAE. They don’t

They then have the idea that pain triggers relapse so they tied facial nerves or injected irritants (Ultra hot chilli pepper type irritants) in the whiskers and feet and relapses occurred. They also sewed the animals together and gave transgenic mice a common blood flow and said monocytes from the blood cause the problem.

The first step is pain-mediated relapse was sensory activation followed by sympathetic activation.

The fourth and final step is mediated by excessive chemokine expressions and is most likely triggered by the activation of the accumulated pathogenic CD4+ T cells in the third step.

However, the authors state in the discussion there does not seem to be a direct correlation clinically between pain intensity and MS disability or lesional load.

Do you get pain before your lesions start?
Hopefully someone will consider replicating the key experiment, because based on what I have seen, I am not sure the Gateway at L5 holds. If this is wrong maybe the pack of cards collapses. 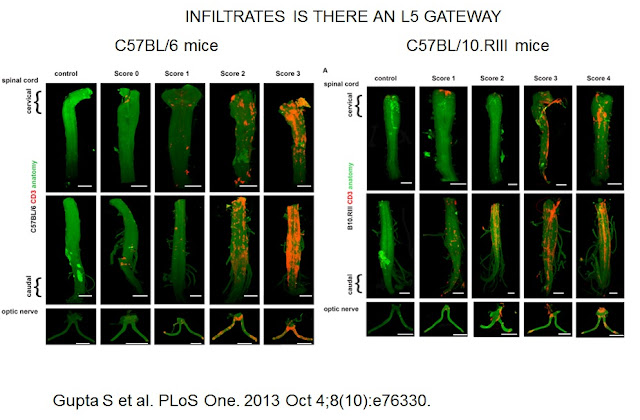 Orange is the T cell

Others people have given TRPV1 agonists, which cause the painful sensation of chilli peppers and they have inhibited EAE in a number of studies (presumably because of the stress they cause). There is a suggestion that animals lacking animals TRPV1 and may not respond noxious stimuli don’t get EAE, we had no problem at all.


What is the next question? Does amputation of toes induce a relapse? Let’s not go there.


If this study is true then it implies relapsing EAE is due to pain signals an makes the ethics of doing such experiments more difficult. We and the Home Office have looked for pain faces (expresssions indicative of the presence of acute pain) of mice with EAE and they were not present.