INTRODUCTION:Multiple sclerosis (MS) is an autoimmune disorder of the central nervous system where inflammation and neurodegeneration play key roles. Mounting evidence implicates oxidative stress in the development of irreversible neuronal and glial injury in this condition. N-acetylcysteine (NAC) is a sulfhydryl amino acid derivative with anti-oxidant and anti-apoptotic properties. Administration of NAC to mice attenuated the induction of or improved experimental autoimmune encephalomyelitis (an MS model).
METHODS: We performed an open-label study to explore the tolerability and safety of the combination of glatiramer acetate (GA) and NAC in patients with relapsing-remitting multiple sclerosis. Seven patients with relapsing-remitting multiple sclerosis with at least one T1 gadolinium-enhancing lesion on screening magnetic resonance imaging were recruited. Treatment consisted of a 10-week run-in period followed by 36-week treatment with a combination of GA 20 mg subcutaneously once daily plus NAC 2.5 g orally twice daily. Outcome measures included safety and tolerability, redox biochemistry, and magnetic resonance imaging effect.
RESULTS:Treatment with the combination of GA and NAC was safe and well tolerated.
CONCLUSIONS:In light of the favourable safety profile, an efficacy-demonstrating study may be considered. 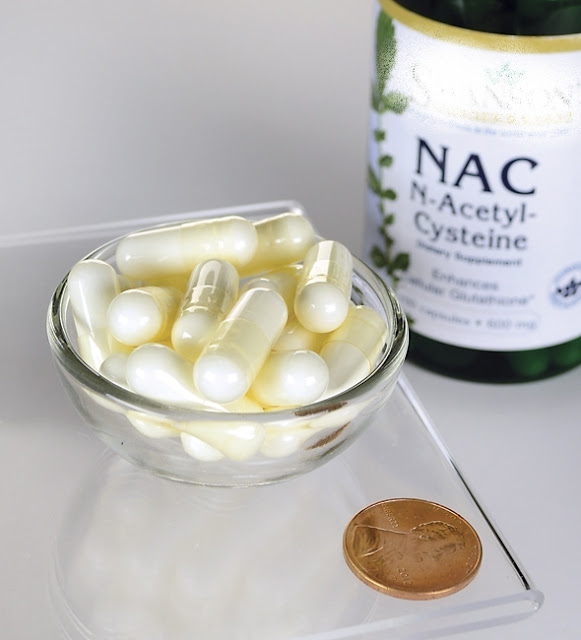 N-acetylcysteine is a pharmaceutical drug and nutritional supplement used primarily as a mucolytic agent and in the management of paracetamol(acetaminophen) overdose. Other uses include sulfate repletion in conditions, such as autism, where cysteine and related sulphur amino acids may be depleted. This compound is sold as a dietary supplement commonly claiming antioxidant and liver protecting effects. It is used as a cough medicine because it breaks disulfide bonds in mucus and liquefies it, making it easier to cough up. MAC serves as a prodrug to L-cysteine which is a precursor to the biologic antioxidant, glutathione and hence administration of NAC replenishes glutathione stores. Glutathione (GSH) is an important antioxidant in plants, animals, fungi, and some bacteria and archaea, preventing damage to important cellular components caused by reactive oxygen species such as free radicals, peroxides, lipid peroxides. Now there is a interest in affecting this oxidative stress to protect nerves.

Many, many years ago this bloke called Mark Nobel who was working on the development of oligodenrocytes came up to me and he said I have this idea for treating MS and it is very safe and I’ve been taking it for months. He asked will you have a look in EAE to see what it does…so being inquisitive and willing to give anything a go (even to spend 3 days & nights giving drug hourly to unblock veins for Andrew Wakefield-yes that Andrew Wakefield of autism infamy and yes it was a bust but that’s another story), I said yes.


We planned the experiment and it was done. I was looking at this data the other day written up on a type writer it did absolutely nothing to EAE in ABH mice. Mark left London and is a neuroscientist professor at the University of Rochester who now works on stem cells (watch his TEDtalk).

Later, out came a study by Lehman D et al. 1994. Oral administration of the oxidant-scavenger N-acetyl-L-cysteine inhibits acute experimental autoimmune encephalomyelitis. It apparently worked in early EAE…I was very sceptical. Move-on a decade or more and now we know that MS and EAE is not just autoimmunity and now I realise that we did the wrong experiments years earlier. We should have targeted nerve loss not the T cell. It was never going to inhibit autoimmunity…so sorry Mark we botched your idea, because the idea was ahead of its time.

An emient MRI Prof Neuro said this to me “Your idea its ahead of its time” when we tried in vane to get progression studies years off the ground years, before the penny dropped.


The pressing need is to strive for NEDA and saving brain…when will this penny drop with neurologists….or certain neurologists?

Anyway back to the story. So now we know more, and a few years ago I said to one of the guys in the lab why don’t we do a neuroprotection study with NAC, so she went off to do a bit of reading and came back and said why would we use NAC, as an anti-oxidant for MS as it does not penetrate into the CNS very well, based on some papers. However there was a NAC-amide that did penetrate the CNS, being made by a company. We wrote to them a number of times to try and get our hands on the drug, and we didn’t get anywhere and time passed and we just moved on. We later saw Offen D et al. 2004. A low molecular weight copper chelator crosses the blood-brain barrier and attenuates experimental autoimmune encephalomyelitis.

However, now we have this study they give NAC to someone on copaxone. They conclude it is safe (NSS!)…surprise, surprise it’s an ingredient of cough medicine. However, as the sample size is only seven people it is not going to tell use anything useful. The question I would want to know…is does much of the NAC or the active ingedient gets into the CNS in  humans? If not, it is not going to be a very good neuroprotective.

Likewise we, can ask the same question about BG-12/tecfidera.

Does anyone know if the active ingredient of BG-12 gets into the CNS in any appreciable amount? I’ve seen a poster on Dimethyl fumarate indicating that most of it doesn’t get in the CNS.

Next what is the pathway to get NAC or NAC + copaxone approved?

Who is going to spend millions on a trial for a drug costing pennies…Maybe a candidate for MS SMART-2.


Have you signed up to MS SMART 1(click here).


You are going to say that there are some papers reporting brain effects of NAC….yes there are some. There is the metsbolite permeability and we have also shown that CNS exclusion can be use to good advantage, to target drugs to where they are needed.


Remember Biogen are testing a remyelination treatment that is according to Biogen people 99.9% excluded from the CNS (this is anti-Lingo-1 not BG-12). But is this a good starting point when most of your drug is doing nothing?


Likewise, there are also studies of human beta interferon and cladribine working in rodent when neither of them cross-react to a targets in rodents and so a bit of reading tells you that the experiments have no validity, so why would you do them?