Reduced expression of membrane-bound (m)RAGE is a biomarker of multiple sclerosis disease progression.

This study is one in series measuring RAGE axis (receptor for advanced glycation end products, its isoforms, and ligands) as a biomarker in multiple sclerosis (MS). We identified and quantified membrane-bound RAGE (mRAGE) expression levels on freshly isolated PBMCs and its subpopulation (monocytes and T cells), and determined the relationship between mRAGE expression levels and MS disease severity.

The reduced mRAGE expression on PBMCs in general, and on monocytes in particular, can be used as biomarker of MS disease severity and progression. 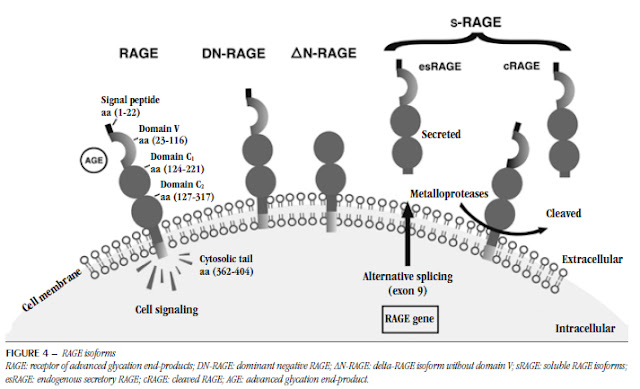 Figure: The different RAGE receptors and its soluble versions (sRAGE)

The receptor for advanced glycation endproducts (RAGE) is predominantly expressed in the lungs, but is also found on immune cells (PBMCs), and has a number of roles; but commonly directs response to cell stress. As far as inflammation is concerned, one of the molecules which binds RAGE, HMGB1 leads to migration of inflammatory cells into a region, thereby sustaining the inflammatory response, but the binding of HMGB1 can also initiate immune response to stem off invading micro-organisms and at the same time direct the regeneration of damaged tissue. Therefore, one mechanism can serve several purposes. Moreover, RAGE has also been directly linked to cancer progression, diabetes, heart disease and Alzheimer’s disease.

What interests me about RAGE, aside from RAGE on PBMCs, is soluble RAGE. RAGE in its unbound form has the potential to bind proinflammatory molecules in the blood taking them out of circulation. Low levels of RAGE are insufficient to bind circulating proinflammatory molecules and therefore cannot protect against chronic inflammation. Previously, those on DMTs (disease-modifying therapies) have been noted to have greater circulating RAGE levels than DMT naive individuals. And not surprisingly low RAGE levels are also associated with greater levels of disability, with SPMS individuals demonstrating lower levels than RRMS individuals (see figure below).

Figure: Cell surface RAGE expression in RRMS and SPMS. Greater levels of RAGE are found in monocytes than T cells and may have a greater role to play in inflammation driven by the innate immune system.

RAGE therefore may be a promising biomarker in MS for predicting progression, however, creating therapies which modulate the RAGE pathway will be unpredictable as it signals via many binding partners with very different end-results.