Growing empirical evidence suggests that nutrition and bacterial metabolites might impact the systemic immune response in the context of disease and autoimmunity. We report that long-chain fatty acids (LCFAs) enhanced differentiation and proliferation of T helper 1 (Th1) and/or Th17 cells and impaired their intestinal sequestration via p38-MAPK pathway. Alternatively, dietary short-chain FAs (SCFAs) expanded gut T regulatory (Treg) cells by suppression of the JNK1 and p38 pathway. We used experimental autoimmune encephalomyelitis (EAE) as a model of T cell-mediated autoimmunity to show that LCFAs consistently decreased SCFAs in the gut and exacerbated disease by expanding pathogenic Th1 and/or Th17 cell populations in the small intestine. Treatment with SCFAs ameliorated EAE and reduced axonal damage via long-lasting imprinting on lamina-propria-derived Treg cells. These data demonstrate a direct dietary impact on intestinal-specific, and subsequently central nervous system-specific, Th cell responses in autoimmunity, and thus might have therapeutic implications for autoimmune diseases such as multiple sclerosis.

There has been renewed interest on the gut, the largest zone of interaction between the environment and the human organism,
There is fast-growing quest for possible disease associations involving interactions between diet, the gut, and microbiome components, especially in autoimmunity.

Here, fatty acids (FAs), as an integral component of daily diet, have become a primary focus of investigation. Of particular interest is the role of short-chain FAs (SCFAs), which are broken down by gut bacteria from otherwise indigestible carbohydrates, i.e., from fibre-rich diets, and have been shown to ameliorate disease in animals. Furthermore, long-chain FAs (LCFAs), the most abundant component of the so-called Western diet, have been suspected as a culprit in various diseases. 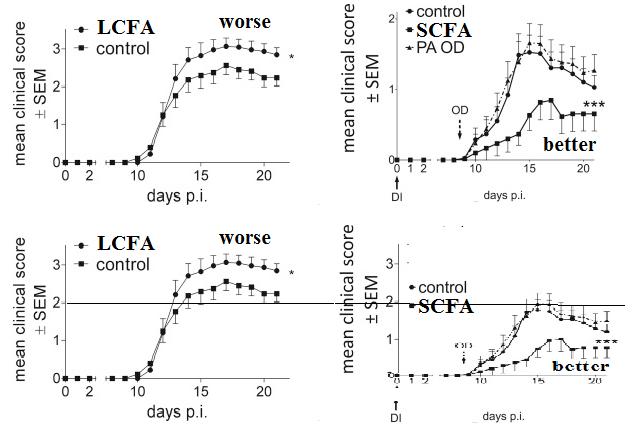 In  this study they report that LCFA promote the production of TH1/Th17 pro-inflammatory cells and SCFA promote T regulatory cells. The LCFA worked via the gut and the feacal filtrates of the gut microbe metabolities made more Th17 cells. The LCFA changes the type of gut microbes. So if you change your diet then it could make your MS better. This hypothesis could be easy to test in humans to see if the Tregs and TH1/Th17 change in the way they think.

This is all great but then they say “So far, influencing MS via direct Treg cell manipulations, e.g., via superagonistic anti-CD28 antibodies, has been considered worthwhile but not practically feasible outside of controlled experimental conditions”

WARNING. This first belief led to people loosing their fingers and toes when used in humans because it was a bonkers idea. Hower to be fair the SCFA are not going to work like this. CD28 superagonists works by the weed killer effect stimulating the cells to grow like crazy and turn themselves off They may have make mre T regs but in doing the former they were going to make a cytokine storm that shut done blood vessels causing gangrene and loss of digits. This should never have been tried in humans as the effect of anti-CD3  which does the same thing was known.

Anti-CD25 should get rid of T regs and make MS worse. It doesn’t it makes it better.