RGC-32 as a potential biomarker of relapse and response to treatment with glatiramer acetate inmultiple sclerosis.

Currently there is critical need for the identification of reliable biomarkers to help guide clinical management of multiple sclerosis (MS) patients. We investigated the combined roles of Response Gene to Complement 32 (RGC-32), FasL, CDC2, AKT, and IL-21 as possible biomarkers of relapse and response to glatiramer acetate (GA) treatment in relapsing-remitting MS (RRMS) patients. Over the course of 2years, a cohort of 15 GA-treated RRMS patients was clinically monitored and peripheral blood mononuclear cells (PBMCs) were collected at 0, 3, 6, and 12months. Target gene mRNA expression was measured in patients’ isolated PBMCs by real-time qRT-PCR. Compared to stable MS patients, those with acute relapses exhibited decreased expression of RGC-32 (p<0.0001) and FasL (p<0.0001), increased expression of IL-21 (p=0.04), but no change in CDC2 or AKT. Compared to non-responders, responders to GA treatment showed increased expression of RGC-32 (p<0.0001) and FasL (p<0.0001), and decreased expression of IL-21 (p=0.02). Receiver operating characteristic (ROC) analysis was used to assess the predictive accuracy of each putative biomarker. The probability of accurately detecting relapse was 90% for RGC-32, 88% for FasL, and 75% for IL-21. The probability of accurately detecting response to GA was 85% for RGC-32, 90% for FasL, and 85% for IL-21. Our data suggest that RGC-32, FasL, and IL-21 could serve as potential biomarkers for the detection of MS relapse and response to GA therapy. 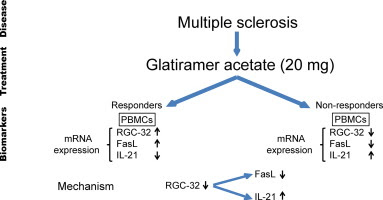 All drugs lead to changes in the physiology of your body through their action, but in some individuals the inaction itself can be telling. By categorizing responders and non-responders to a treatment, you can look for unique patterns in the two groups in order to determine those who are most likely to respond to your treatment.

RGC-32 is a cell cycle regulator and is expressed on T cells and in the brain. It regulates FasL and IL-21 levels. FasL is a member of the tumour necrosis family and induces cell destruction, whilst IL-21 is a cytokine that regulates the action of immune cells.

During acute MS relapse compared to the remission phase leads to a reduction in RGC-32 and FasL but increased IL-21 in PBMCs. After commencing treatment with glatiramer acetate RGC-32 and FasL levels are increased, whilst IL-21 levels are decreased in MSers who are responders to glatiramer acetate treatment. Therefore, the three markers in combination can be used as a marker to evaluate treatment response. A larger study needs to be carried out to see whether initial levels at the start of treatment can be predictive of future treatment response and whether relapses on treatment can be predicted – the era of personalised medicine. 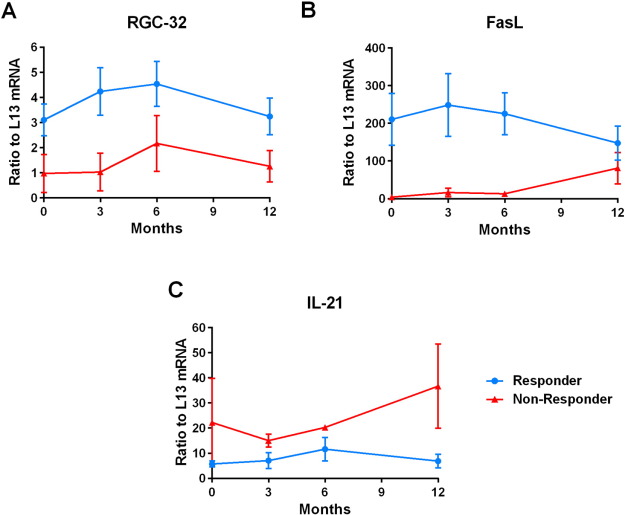