We have previously identified a distinct class of antibodies expressed by B cells in the cerebrospinal fluid (CSF) of early and established relapsing remitting multiple sclerosis (RRMS) patients that is not observed in healthy donors. These antibodies contain a unique pattern of mutations in six codons along VH4 antibody genes that we termed the antibody gene signature (AGS). In fact, patients who have such B cells in their CSF are identified as either having RRMS or developing RRMS in the future. As mutations in antibody genes increase antibody affinity for particular antigens, the goal for this study was to investigate whether AGS(+) antibodies bind to brain tissue antigens. Single B cells were isolated from the CSF of 10 patients with early or established RRMS. We chose 32 of these B cells that expressed antibodies enriched for the AGS for further study. We generated monoclonal full-length recombinant human antibodies (rhAbs) and used both immunological assays and immunohistochemistry to investigate the capacity of these AGS(+) rhAbs to bind brain tissue antigens. AGS(+) rhAbs did not recognize myelin tracts in the corpus callosum. Instead, AGS(+) rhAbs recognized neuronal nuclei and/or astrocytes, which are prevalent in the cortical gray matter. This pattern was unique to the AGS(+) antibodies from early and established RRMS patients, as AGS(+) antibodies from an early neuromyelitis optica patient did not display the same reactivity. Prevalence of CSF-derived B cells expressing AGS(+) antibodies that bind to these cell types may be an indicator of gray matter-directed autoimmunity in early and established RRMS patients. 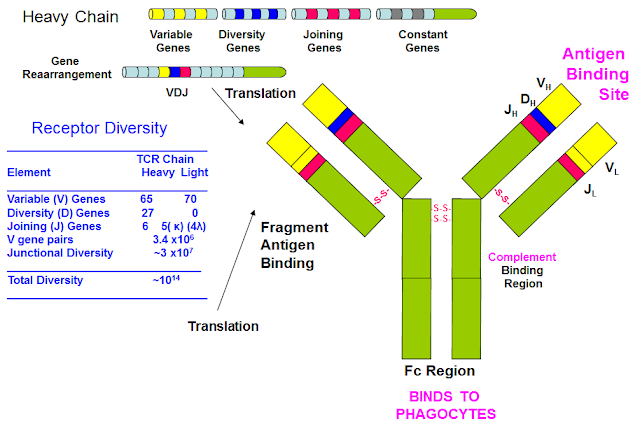 Antibodies are made from combining genes present in our DNA to make an antibody molecule that contain variable, constant region etc and are composed of an heavy and a light chain. The amino acid sequence of the antibody is transcribed from the DNA codons which are three nucleic acids read to make an amino acid. When B cells are made they make IgM which is like 5 IgG (above) molecules put together. These have a weak binding affinity for their target. When a B cell is stimulated it expands to make more of itself and it can change the constant regions (green bits above) to make IgG, IgE, IgA etc. It can also hypermutate parts of the variable region that make the target binding area to be of high affinity which binds strongly to its target. In this study they too looked at what the B cells were binding to and they made synthetic antibodies and they saw what they bound to. They too found that the antibodies did not bind to myelin and thus replicate the recent study and they too reacted to neuronal and astrocytic targets and this was a different pattern to someone with NMO who we know react with a water channel on astrocytes and some people react to  myelin oligodendrocytes. So without a shadow of a doubt there is autoimmunity in MS and this occurs early in disease but is it a consequence or a cause. So further evidence that B cells are bad, so time to do something about them and there is only one way to do this and you know what can do this. Is this what causes grey matter disease. It may not be the whole story but it will contribute to the problem

http://multiple-sclerosis-research.blogspot.com/2015/10/there-is-autoimmunity-in-ms-b-means-bad.html
Also remember whilst we are showing a B cell problem, behind every bad B cell there is usually a bad T cell that helps the B cell to make antibody