OBJECTIVE:To determine the antigenic determinants and specific molecular requirements for the generation of autoregulatory neuroantigen-specific CD8+ T cells in models of multiple sclerosis (MS).
METHODS:We have previously shown that MOG35-55-specific CD8+ T cells suppress experimental autoimmune encephalomyelitis (EAE) in the C57BL/6 model. In this study, we utilized multiple models of EAE to assess the ability to generate autoregulatory CD8+ T cells.
RESULTS:We demonstrate that alternative myelin peptides (PLP178-191) and other susceptible mouse strains (SJL) generated myelin-specific CD8+ T cells, which were fully capable of suppressing disease. The disease-ameliorating function of these cells was dependent on the specific cognate myelin antigen. Generation of these autoregulatory CD8+ T cells was not affected by thymic selection, but was dependent on the presence of both CD4+ and CD8+ T-cell epitopes in the immunizing encephalitogenic antigen.
CONCLUSIONS: These studies show that the generation of autoregulatory CD8+ T cells is a more generalized, antigen-specific phenomenon across multiple neuroantigens and mouse strains, with significant implications in understanding disease regulation 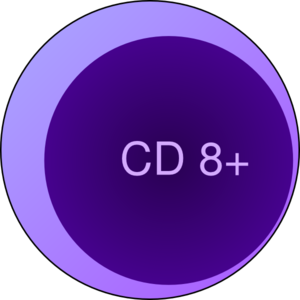 EAE is usually a CD4 T cell mediated disease but when it was found that CD8 T cells are common in MS lesions the animal modellers showed how you get CD8 mediated disease and soon it will become a CD20 B cell mediated disease because of the apparent success of ocrelizumab:-). Anyway a million years ago:-)
before CD4, CD25, Fox3P T reg cells control the show and before Th2 controlled the show, it was actually CD8 T suppressor cells that controlled the the show. They were controlled by a region in the MHC called I-J that was different from I-A and I-E, which were the two class II molecules controlling CD4 function. Problem was when molecular biology came along and the MHC was sequenced there was no I-J in the MHC and suppresor cells were not cloned and they fell out of favour and the TH1 v Th2 concept was born (see education section).

However, there are stacks of data on the effects off of blocking CD8 and their suppressor cell function. Much of this data was ignored at it was published prePM. i.e. before PubMed. When people stopped being bothered about going to the library. This old stuff has now been added but this information was lost to a generation of young scientists and remember having an online argument with someone who MD2 called an ameoba saying that CD8 suppressor cells never exsisted.

In those days it the suppressor cells were bound by a clone called Ly2 (Before the CD nomeclature cells were described by the antibodies that bound them so in humans CD4 T cells were bound by antibodies such as orthoclone OKT4 by Becton and Dickinson Leu 2 and CD8 by OKT8 and Becton and Dickinson Leu3). Anyway enough of the shaggy dog story. CD8 T cells are coming back into flavour and this paper shows it.  Yeah this is perfect timing as I was talking about them with new data for the first time just yesterday a so yes I think their are implications for this in MS. However, what happened in Dublin (Frontiers of Neurology 2015) stays in Dublin because unlike ProfG I don’t put my slides on the web because they contain unpublished data, which I prefere to do if I do a talk.

ProfG’s talk was great and convinced me that we should be doing trials differently, but how do you convince the laggards that have the power, and we can be doing trials in people with wheelchairs because they can benefit too!

All we need now is to get this/these funded. So don’t hold your breath for a quick outcome.