As a molecular chaperone and activator of Toll-like receptor 2-mediated protective responses by microglia and macrophages, the small heat shock protein alpha B-crystallin (HspB5) exerts therapeutic effects in different animal models for neuroinflammation, including the model for multiple sclerosis (MS). Yet, HspB5 can also stimulate human antigen-specific memory T cells to release IFN-γ, a cytokine with well-documented detrimental effects during MS. In this study, we explored in a Phase IIa randomized clinical trial the therapeutic application of HspB5 in relapsing-remitting MS (RR-MS), using intravenous doses sufficient to support its protective effects, but too low to trigger pathogenic memory T-cell responses. These sub-immunogenic doses were selected based on in vitro analysis of the dose-response profile of human T cells and macrophages to HspB5, and on the immunological effects of HspB5 in healthy humans as established in a preparatory Phase I study. In a 48-week randomized, placebo-controlled, double-blind Phase IIa trial, three bimonthly intravenous injections of 7.5, 12.5 or 17.5 mg HspB5 were found to be safe and well tolerated in RR-MS patients. While predefined clinical endpoints did not differ significantly between the relatively small groups of MS patients treated with either HspB5 or placebo, repeated administration especially of the lower doses of HspB5 led to a progressive decline in MS lesion activity as monitored by magnetic resonance imaging (MRI), which was not seen in the placebo group. Exploratory linear regression analysis revealed this decline to be significant in the combined group receiving either of the two lower doses, and to result in a 76% reduction in both number and total volumes of active MRI lesions at 9 months into the study. These data provide the first indication for clinical benefit resulting from intervention in RR-MS with HspB5.

It has been shown that HspB5 is a potential target for autoimmunity and delivery of HspB5 via the tolerogenic route can reduce the number of MRI lesions by three quarters although the groups were too small to see an impact on relapsing disease. So is this the evidence that MS is due to autoimmunity to HspB5. I guess we should say yes.

There as many immunologists that think that the autoimmune target is myelin basic protein (MBP), which is easy to make and work with.

But if you think MS is autoimmune and you ask what does the immune response react to in an MS brain? It

was found that it was alpha B cyrstallin (HspB5) and not any of the myelin proteins was the target for autoreactive cells in MS brains. It was found that people without MS could also respond to this protein too, but in healthy brains HspB5 was not expressed. It seemed that HSP5 was not expressed in the human thymus unlike in monkeys and rats and some mouse strains were it was expressed such that it would cause deletion of HspB5 reactive cells and so be relatively unique to humans. So in humans HspB5 reactive cells could escape thymic killing and escape into the blood and off they would into lymph glands waiting to get stimulated. Then viruses, notably EBV, would infect B cells and they would express and present HspB5 to T cells causing their priming and then you have everything ready for an autoimmune disease. Then something infects or stresses the oligodendrocytes and they them upregulate HspB5, which they do, such that it becomes the most abundant protein expressed and a target for autoimmunity.


So simple turn off the immune response to HspB5 and that is the end of MS!

So this is a very nice concept and has few limitations except that MS should also cause a lot of lens problems as HspB5 is expressed in the eye and one wonders how much protein will actually get to the CNS to be a microglial inhibitory molecule via Toll2-like receptor? 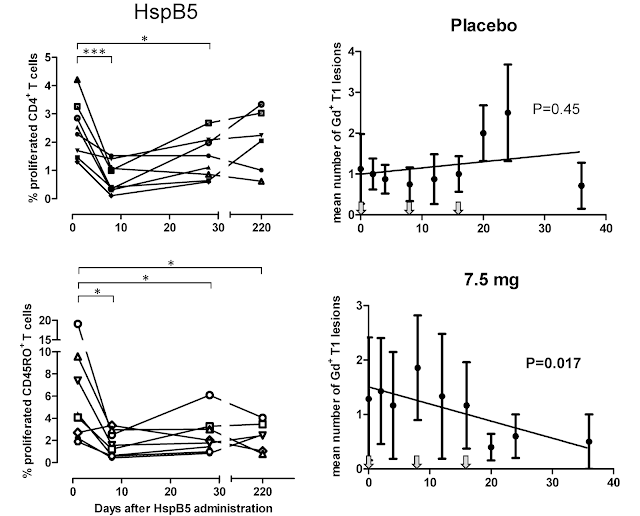 Anyhow, now this study reports that gadolinium  responses were reduced as were the T cell responses, but they were not eliminated. So is this the start of something good? If this does not get developed will it be the end of a missed oppertunity as the best chance to control autoimmunity in MS using antigen-specific therapy, which should have limited side effects. The future now depends on whether there are larger Phase II or Phase III studies.

We have been saying for some time that intravenous tolerance works best when it is applied following CD4 T cell depletion. Would this have got rid of more lesions, T cell responses and importantly relapses as 1/4 (low dose), 1/7 (medium dose) and 3/7 (high dose) people relapsed and could point to failure of the project. However it surely does suggest that there is an autoimmune process in MS.
CoI. ProfG was on the advisory panel