Multiple sclerosis (MS) is a neurodegenerative disease resulting from an autoimmune attack on central nervous system (CNS) myelin. Although CD4(+) T cell function in MS pathology has been extensively studied, there is also strong evidence that CD8(+) T lymphocytes play a key role. Intriguingly, CD8(+) T cells accumulate in great numbers in the CNS in progressive MS, a form of the disease that is refractory to current disease-modifying therapies that target the CD4(+) T cell response. Here, we discuss the function of CD8(+) T cells in experimental autoimmune encephalomyelitis (EAE), a mouse model of MS. In particular, we describe EAE in non-obese diabetic (NOD) background mice, which develop a pattern of disease characterized by multiple attacks and remissions followed by a progressively worsening phase. This is highly reminiscent of the pattern of disease observed in nearly half of MS patients. Particular attention is paid to a newly described transgenic mouse strain (1C6) on the NOD background whose CD4(+) and CD8(+) T cells are directed against the encephalitogenic peptide MOG[35-55]. Use of this model will give us a more complete picture of the role(s) played by distinct T cell subsets in CNS autoimmunity


However dealing with relapsing MS has become less of a priority as focus has been shifted towards progressive MS. We have developed a secondary progressive model which follows a relapsing remitting or to be more precise a relapsing progressive disease such that there is increasing poor recovery from attack after each relapse and then the relapses burn out and slow neurological worsening occurs that does not respond to T cell therapy. This happens in ABH mice and others if you observe them for long enough 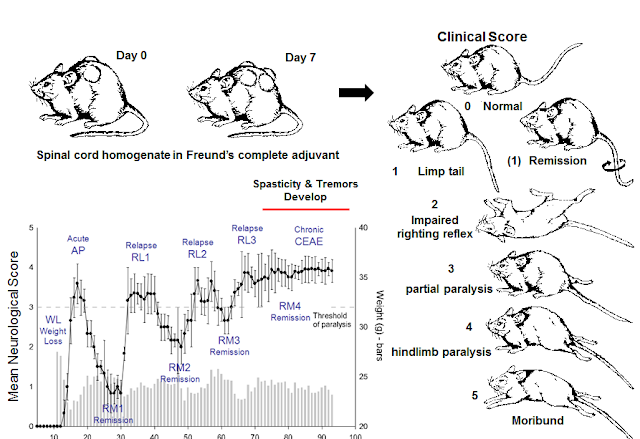 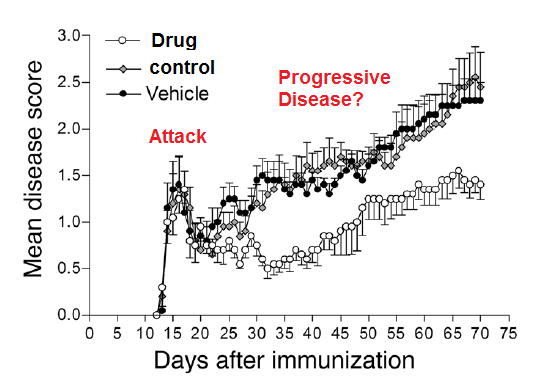 Look at the line and you say there is progression and so its a secondary progressive model however it responds well to T cell therapy, just like our relapsing model.


However we have been asking that people include more information about their line graphs…..Baker D, Amor S. Publication guidelines for refereeing and reporting on animal use in experimental autoimmune encephalomyelitis. J Neuroimmunol. 2012 ;242(1-2):78-83……so they can be interpreted.

We know that not all of our ABH experiments look as pretty as that above and sometimes we get. 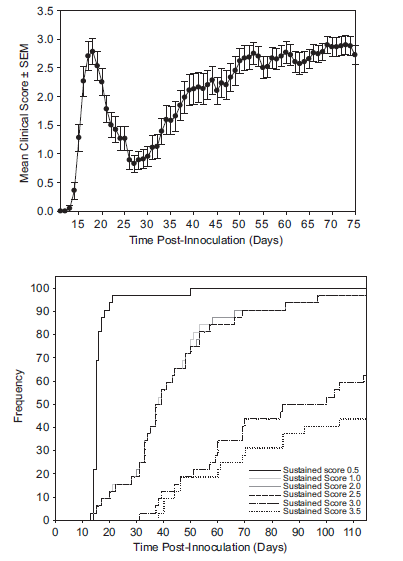 Top one looks like there is a strong attack compared to the weak one in the NOD,it is after all a low EAE susceptible strain.

Baker D, Rosenwasser OA, O’Neill JK, Turk JL. Genetic analysis of experimental allergic encephalomyelitis in mice. J Immunol. 1995;155:4046-51. Experimental allergic encephalomyelitis (EAE) is an autoimmune disease of the central nervous system that exhibits many pathologic similarities with multiple sclerosis. While products of the MHC are known to control the development of EAE, it is clear that non-MHC products also influence susceptibility. The chromosomal locations of these were investigated in selective crosses between MHC class II-compatible, EAE-susceptible Biozzi ABH, and low responder nonobese diabetic (NOD) mice. The disease was dominant and highly influenced by gender in the backcross one (BC1) generation. Female mice were significantly more susceptible than male mice. Segregation of disease frequency of female animals in this cross suggested that EAE was controlled by a major locus. Although microsatellite-based exclusion mapping indicated that a number of regions on chromosomes 5, 6, 7, 8, 9, 10, 11, 12, 13, and 18 showed evidence of linkage (p < 0.05) compared with expected random distributions of alleles, disease susceptibility was most strongly linked (p < 0.001) to chromosome 7. However, by selectively analyzing animals that were either severely affected or almost normal, additional susceptibility loci were mapped on chromosomes 18 and 11 that were linked (p < 0.001) to resistance and the development of severe disease, respectively. The data indicate a major locus on chromosome 7, affecting initiation and severity of EAE that is probably modified by several other unlinked loci. These localizations may provide candidate loci for the analysis of human autoimmune-demyelinating disease. (So MS is like EAE and polygenic and it was clear at that point that the technology was no good enough to find the actual genes (as was the case in humans too) and so stopped hunting…Now I have the whole genome sequence of ABH (and NOD mice) and could go back and look at this).

However doesn’t it look like after the first attack there is progressive worsening. However, this is simply the effect of an asynchronous, relapsing-remitting disease that showed increasing poor recovery. The poorer the recovery correlated with more attacks. So you don’t want to tolerate attacks (relapses) and should aim to not have them. It is plain to see in animals humans will be no different.

In the case above at the individual level disease is relapsing remitting with increasingly poor recovery, not truly progressive as appears from the line graph.

So back to the NOD Model. I have emailed a lot of people doing NOD EAE and they say it is a relapsing model. So let’s look at what what is published by some authors of the 2008 paper as they show responses of individual mice.


This is clearly also an asychronous relapsing disease with variable amounts of recovery and is therefore not a true progressive disease in its early stages, when it is modified by T cell therapy.  However there may be true post-relapse secondary progression just as occurs in the ABH mouse model as they say. 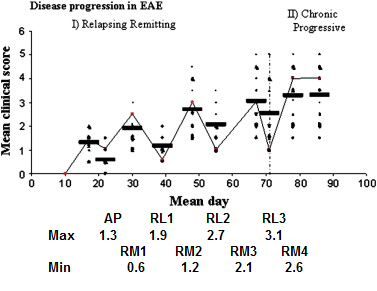 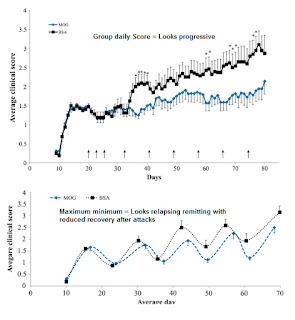 
C57BL/6 mice can go secondary progressive after one attack as can some ABH (although this is unusual) but it normally takes 3-4 attacks for this to happen and it it occurs quicker in males than females. However the progression is very slow and so you need to have ways to measure it the mouse EDSS is too insensitive.


In the animals it looks like a “slow burn” occurs around lesions this may occur in humans too. It is also possible humans that some progression progression could still be due to relapses, which may be largely subclinical relapses. We know that about 85% of lesions go un-noticed clinically but each lesion will be causing small amounts of damage and over time this may cause accumulated damage.

However, I predict the NOD (Non-obese diabetic-this spontaneously develops insulin dependent diabetes) mouse will become more and more important because they have made NOD mice that lack T and B cells called a NOD Scid (Severe combined immunodeficiency) mouse that lacks T and B cells (So it can’t reject anything). They also make it even more immunodeficient by knocking out a few for immune genes and these are called NOG mice. 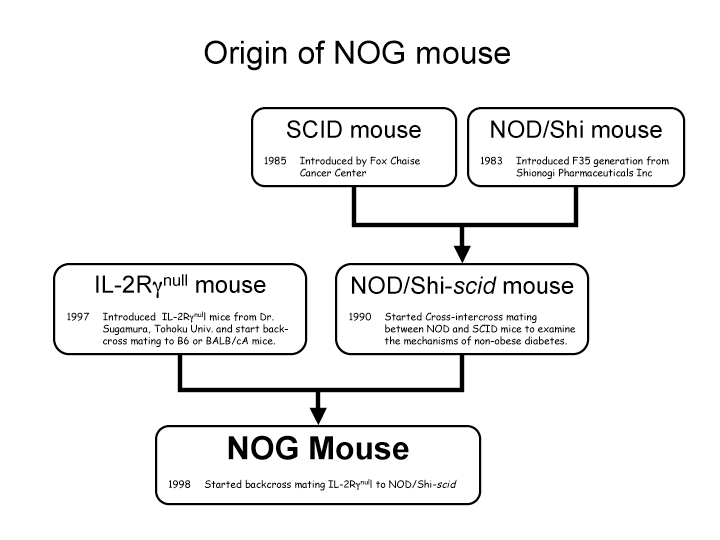 Now you can transplant CD34+ blood stem cells and they repopulate the NOG mouse with human immune cells. These can then be studied to monitor human immune function.

Once they are developed to have a fully functional immune system, we will be throwing the standard mouse models away because why work with mouse cells when you can work on human cells and you can test your drugs on them as some drugs e.g. cladribine does not work on mouse lymphocytes but only human and non-human primate cells.