Multiple sclerosis (MS) has long been regarded as a chronic inflammatory disease of the white matter that leads to demyelination and eventually to neurodegeneration. In the past decade, several aspects of MS pathogenesis have been challenged, and degenerative changes of the grey matter, which are independent of demyelination, have become a topic of interest. CNS inflammation in MS and experimental autoimmune encephalomyelitis (EAE; a disease model used to study MS in rodents) causes a marked imbalance between GABAergic and glutamatergic transmission, and a loss of synapses, all of which leads to a diffuse ‘synaptopathy’. Altered synaptic transmission can occur early in MS and EAE, independently of demyelination and axonal loss, and subsequently causes excitotoxic damage. Inflammation-driven synaptic abnormalities are emerging as a prominent pathogenic mechanism in MS—importantly, they are potentially reversible and, therefore, represent attractive therapeutic targets. In this Review, we focus on the connection between inflammation and synaptopathy in MS and EAE, which sheds light not only on the pathophysiology of MS but also on that of primary neurodegenerative disorders in which inflammatory processes contribute to disease progression. 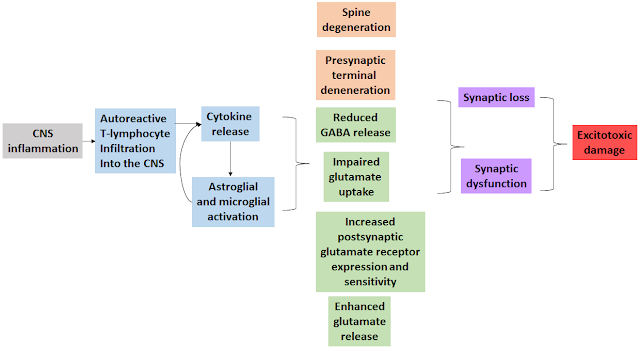 Dendrites and synapses are vulnerable to excitotoxicity (see diagram). One immune cell, in particular, keeps cropping up when there is synaptic damage, the microglia. Microglia are the resident macrophages in the brain, and were previously believed to quite static, but now understood to be anything but. Their main role is to remove damaged cells including dysfunctional synapses; a process called “synaptic stripping”. However, in MS they are very much activated resulting in a massive release of TNF (tumour necrosis factor)-alpha, which causes excessive glutamatergic transmission, ultimately cascading to excitotoxicity (see diagram).

All hope is not lost, and we turn to Laquinomod. Laquinomod has little to recommend itself in RRMS (only managing an abysmal 23% relapse reduction compared to placebo) but has this surprising 36% decrease in disability progression and a 33% reduction in brain volume loss. A paradox if ever there was one. This happy coincidence may be explained by Laquinomod’s ability to limit alterations in GABAergic and glutamatergic synapses, thereby limiting glutamatergic excitotoxicity which leads to synaptic implosion (Article: Laquinomod prevents inflammation-induced synaptic alterations occurring in experimental autoimmune encephalomyelitis).