Glatiramer acetate (GA) has been available under the brand name Copaxone® for nearly two decades. Recently, the US Food and Drug Administration (FDA) approved the first generic GA, Glatopa™, as fully substitutable for all indications for which Copaxone 20mg is approved; Glatopa also represents the first FDA-approved “AP-rated,” substitutable generic for treating patients with MS. Glatiramer acetate is a complex mixture of polypeptides and, consequently, its characterization presented challenges not generally encountered in drug development. Despite its complexity, and without requiring any clinical data, approval was accomplished through an Abbreviated New Drug Application in which equivalence to Copaxone was evaluated across four criteria: starting materials and basic chemistry; structural signatures for polymerization, depolymerization, and purification; physicochemical properties; and biological and immunological properties. This article describes the rigorous overall scientific approach used to successfully establish equivalence between Glatopa and Copaxone, and presents key representative data from several of the comprehensive sets of physicochemical (structural) and biological (functional) assays that were conducted.


Copaxone is the worlds best selling MS drug at about $4 billion a year. Is this amazing because of its reported level of efficacy. Now some people will say I am doing very well on this agent. This is a fair point but some don’t and choose to switch

The data is tout there for all to see and it is clear that copaxone is not the most effective at stopping the relapse rate, but some say it takes time to work, so I

asked someone (Their idenity is not important) why they thought it was the best seller, even in Europe?


I was shocked by their response……It was lazy neurologists……they don’t want to do much.


As Copaxone has one of the best safety profiles  then monitoring their patients is not an issue and as people with MS are happy because they are being treated without side effects and as they generally do well in terms of disability accrual early in disease, it’s a win, win.


Now if this there is a shredder chomping away, as suggested by ProfG, at your neural reserve, it means that by not being on top of disease early means that your neural reserve is lost quicker. This means disability in the future. Some may point out that copaxone is reported to stimulate cells to make nerve growth factors like BDNF and be neuroprotective. Does it stop  progressive MS?

However,because Copaxone is making so much money every one wants a slice of that Pie. It is not surprsing that someone wants to make a generic.


To limit the size of the target population, Teva have reinvented Copaxone daily to  be Copaxone 3 times a week as the copaxone daily patent has gone. So they have been shifting people onto their premium product, so I bet as this patent dies we will see Copaxone once a week:-). If the competitor lawyers get their way this will be sooner rather than later.


Generics are copies of the original but how do you make an identical molecule, when the original is never the same as it is a random mix of amino acids that’s not quite the same from batch to batch. I was told that they test each batch in animals to test for efficacy…if this is true, it is not very 3Rs.

This paper says a few things that the FDA use to decide if the generic is worth approving and the generic glaterimer acetate
got an Abbreviated NDA. As it is open access you can read it


“Bioequivalence is deﬁned by the Code of
Federal Regulations, 21CFR320.1, as the “absence of a signiﬁcant difference in
the rate and extent to which the active ingredient or active moiety in
pharmaceutical equivalents or pharmaceutical alter becomes available at the
site of drug action when administered at the same molar dose under similar
conditions in an appropriately designed study”


Does this mean that any pro-drug is just the same as the parent?
Maybe this is why Merck is not trying to get movetro on to the agenda with the FDA in the US and are just dealing with the EMA.

However, what they say they do is a series of experiments and show that glatopia (a generic glaterimer) is like copaxone and so they go to animals.


However, if you go to animals and look at the data . The question is “Is the data is just as bad or is it just as good as the original?”.


We hear that copaxone is great at inhibiting EAE and that is it how it was developed, but if you look at the animal data, it leads a lot to be desired.


In this paper is a good example, if we look at the top graph the effect is a delay of about 2 days and there is limited if any effect on severity of disease such that the animals end up in essentially the same place with or without treatment. So the data is not that startling.


Is this it because they are trying to inhibit Proteolipid protein disease disease in (High EAE susceptibile) inbred SJL mice, when glaterimer is based on myelin basic protein?


So two individuals, it works in one and not the other. So what happens in humans, I hope it works for you, it seems to work for some and not others. 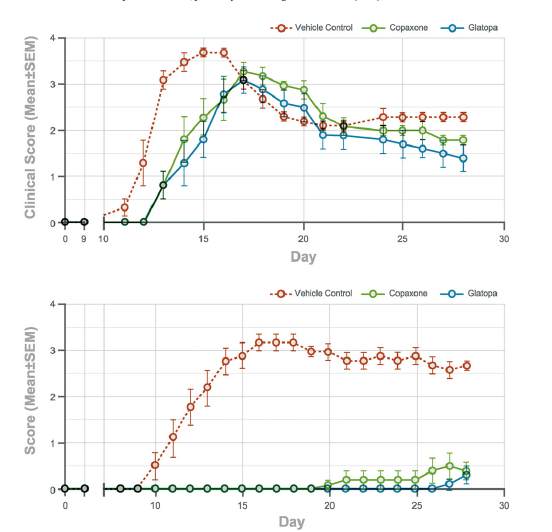 However, if we do an analysis of the published data of glaterimer acetate in animals the picture of activity if it is given subcutaneously is often like the top graph and not that impressive.


In some studies such as found in patents this is actually toxic in the animals.


Glaterimer works best when you mix the glaterimer acetate with the sensitizing mixture and then it can wipe out disease completelty, even in highly susceptible animals that respond to PLP. The data is there to be seen and I know I’ve done it.