The occurrence of cognitive disturbances upon CNS inflammation or infection has been correlated with increased levels of the cytokine tumor necrosis factor-α (TNFα). To date, however, no specific mechanism via which this cytokine could alter cognitive circuits has been demonstrated. Here, we show that local increase of TNFα in the hippocampal dentate gyrus activates astrocyte TNF receptor type 1 (TNFR1), which in turn triggers an astrocyte-neuron signaling cascade that results in persistent functional modification of hippocampal excitatory synapses. Astrocytic TNFR1 signaling is necessary for the hippocampal synaptic alteration and contextual learning-memory impairment observed in experimental autoimmune encephalitis (EAE), an animal model of multiple sclerosis (MS). This process may contribute to the pathogenesis of cognitive disturbances in MS, as well as in other CNS conditions accompanied by inflammatory states or infections. 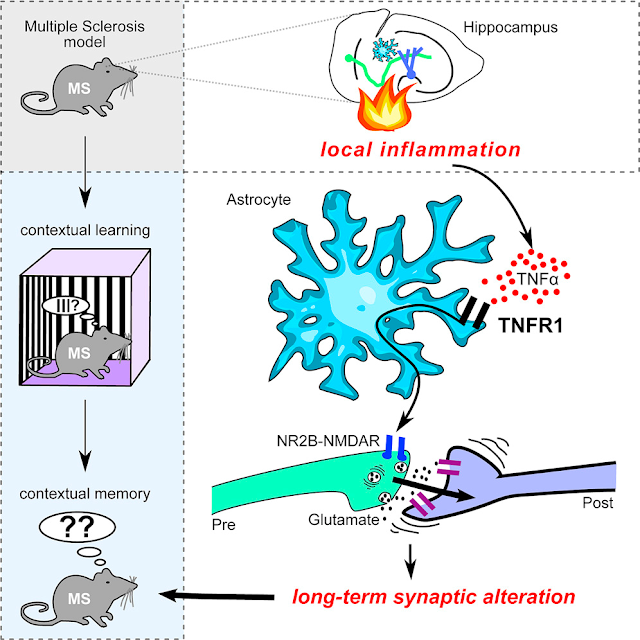 Figure: Mice with EAE display impairment of long-term contextual memory, this is linked to increased TNFα during inflammation which activates astrocytic TNFR1.

The hippocampus is the area of the brain involved in memory via a process called long-term potentiation which is produced by strengthening synaptic activity. This activity is subject to regulation by surrounding glial cells, and in the hippocampus gliotransmitters from astrocytes modulate synapses in cognitive circuits. The glial regulatory pathway itself is controlled by the cytokine tumour necrosis factor-alpha (TNFα). So it is not surprising there is interest in finding out what happens to the hippocampal cognitive circuit when TNFα increases above homeostatic levels (i.e. a state whereby internal conditions remain stable), as in inflammation. There already exists a link between TNFα levels and cognitive dysfunction in MS, but to date the mechanisms leading to this have remained elusive.

The authors find that high levels of TNFα persistently alters the activity of this synaptic circuit via TNF receptor type 1 (TNFR1) in astrocytes leading to cognitive disturbances; primarily from increased glutamate mediated excitatory activity that reduces the dynamic range and impairs long-term potentiation. There also appears to be a time sensitive overlap with local inflammation restricted to the hippocampus than a generalised inflammatory state of the whole brain. It may even be distinct from the one causing motor symptoms, i.e. it is not a length dependent pathology.

So it would appear that high levels of TNFα cause persistent synaptic alterations in the hippocampus that lead to cognitive dysfunction, and the astrocyte TNFR1 mediates this synaptic effect. Targeting astrocytic TNFR1 function, specifically blocking this may offer a promising treatment strategy for tackling the cognitive deficit in MS.