New incentives will increase the delay in being diagnosed with MS. #PoliticalSpeak #BrainHealth #MSBlog

“I read last week’s BMJ and was horrified to read that GP practices are being given money to cut the number of referrals they make to specialists. A FOI investigation by the GP rag Pulse has uncovered that several clinical commissioning groups (CCGs) are offering GP practices large payments for keeping within targets for specialist outpatient referrals. Some of the incentive schemes are even counting 2-week cancer referrals as part of the target. Wow; imagine if you have symptoms suggestive of a cancer and your GP would rather claim the cash for their practice than refer you for investigations. This is simply outrageous!”

“What are the implications for MSers? As part of our ‘Brain Health – Time Matter in MS‘ policy document we highlight the long referral delays from GPs to a neurologist for patients presenting with neurological symptoms compatible with MS. These incentive schemes will simply increase this delay. We really need to oppose these schemes. I can’t see who benefits from asking GPs to reduce their specialist referral rates by paying them a cash incentives, but the central NHS bean counters. What is happening to the NHS?”

“The above incentive scheme is no different to our 70:30 high-cost drug rule. Our high-cost drug prescribing is being capped based on last year’s prescribing. If we under prescribe we will be given a 30% of our underprescribing as cashback by NHS England. If we over prescribe NHS England will only cover 70% of the costs and our Trust, or Hospital, will have to find the money from their existing budgets to cover the 30% shortfall. Therefore there is a cash incentive at a Trust level to encourage us to under prescribe, and a stick to stop us starting new patients on treatment. We are very concerned about this policy as it penalises new patients and any new treatments coming online. Patients started on DMTs tend to stay on treatment therefore the costs increase over time, therefore any new patients started on treatment will add to the total and we will have to get our Trust to find money to pay for the 30% penalty. As our Trust is in deficit where are they going to find the money? May be NHS England are asking us to negotiate a 30% discount with the Pharma companies who are selling these products or they are asking us to innovate. Could we badge off-label prescribing as innovation and save the NHS money that way?” 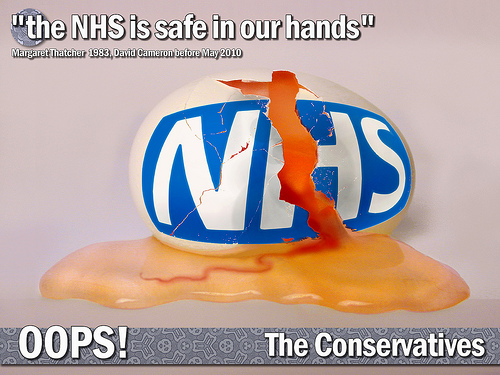 “Austerity is really putting clinicians in a very difficult position. We are meant to treat our patients based on the best evidence available. These policies are asking us to make financial decisions about referring, or not referring, prescribing high-cost DMTs, or not prescribing high-cost DMTs, to save the NHS money. Who is my primary responsibility to; my patients or the NHS? I am beginning to buy into the neoliberal conspiracy theory; the Tories want to run the NHS into the ground with the hope that we the public demand a solution. They will then propose a private funding, or insurance, solution to fund healthcare for those who can afford it. Am I wrong? Or am I am just being paranoid?”

….. Such schemes are not new – in 2012 former GPC chair Dr Laurence Buckman reported PCTs’ schemes to the GMC, declaring: ‘Taking money from patient care and pocketing it for reducing something you do is wrong.’……

….. But CCGs are now also increasingly using them to cut costs, in the shadow of a £22bn black hole in NHS finances……

….. The GPC says many of these schemes are ‘ethically questionable’ and Pulse has learned that the GMC looked into at least one of them to see if it is contrary to the guidance set out in Good Medical Practice…..

….. However, it is the inclusion of urgent cancer referrals that has caused most controversy. NHS Lambeth CCG is offering payments for practices moving towards the average 2014/15 CCG referral rate per 1,000 patients……

…… But it is the public perception of these payments to reduce referrals that is of particular concern, in the wake of the furore over NHS England’s ‘cash for diagnoses’ drive last year, whereby practices were paid £55 for each newly diagnosed case of dementia……