“One of the problems with the EBV hypothesis of MS is how does it explain some of  the clinical observations we see, for example the treatment effect of natalizumab and other anti-trafficking drugs such as fingolimod, and the rebound that occurs when these drugs are stopped? I have previously discussed the field hypothesis, i.e. that a virus may infect glial or neuronal cells that are hidden from the immune system by natalizumab and that when you stop natalizumab the immune system finds the virus and causes rebound. However, this does not explain why MSers don’t get symptoms from the viral infection of the glial and/or neuronal cells in the absence of an immune response. This is the flaw in the field hypothesis.”
“The study below shows that gamma herpes viruses, including EBV, can infect neuronal cells, with lytic infection (a type of infection that kills the cell). If this is how EBV causes MS it would almost certainly cause symptoms (relapses), or disease progression (worsening), in MSers on natalizumab of fingolimod. The latter does not appear to happen at least in the short to intermediate term. In addition, when we and others have looked at which cells express EBV in the brains of people with MS it does not appear to be neurons, but B cells. Therefore, I am not sure what to make of the conclusions of the study below and whether or not these observations are relevant to MS. Clearly more work needs to be done on this to see if it is relevant to MS and other disease models. Which disease model you may ask? The best model of MS happens to be the Japanese Macaque Encephalomyelitis model that happens to be caused by a gamma herpesvirus.” 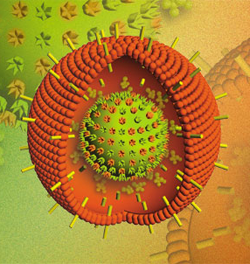 Background: Gammaherpesviruses human herpesvirus 4 (HHV4) and HHV8 are two prominent members of the herpesvirus family associated with a number of human cancers. HHV4, also known as Epstein-Barr virus (EBV), a ubiquitous gammaherpesvirus prevalent in 90 to 95% of the human population, is clinically associated with various neurological diseases such as primary central nervous system lymphoma, multiple sclerosis, Alzheimer’s disease, cerebellar ataxia, and encephalitis. However, the possibility that EBV and Kaposi’s sarcoma-associated herpesvirus (KSHV) can directly infect neurons has been largely overlooked.

Importance: To date, no in vitro study has demonstrated gammaherpesvirus infection of neuronal cells. Moreover, worldwide clinical findings have linked EBV to neuronal pathologies, including multiple sclerosis, primary central nervous system lymphoma, and Alzheimer’s disease. In this study, for the first time, we have successfully demonstrated the in vitro infection of Sh-Sy5y and Ntera2 cells, as well as human primary neurons. We have also determined that the infection is predominately lytic. Additionally, we also report infection of neuronal cells by KSHV in vitro similar to that by EBV. These findings may open new avenues of consideration related to neuronal pathologies and infection with these viruses. Furthermore, their contribution to chronic infection linked to neuronal disease will provide new clues to potential new therapies.