Elevated Expression of the Cerebrospinal Fluid Disease Markers Chromogranin A and Clusterin in Astrocytes of Multiple Sclerosis White Matter Lesions.

Using proteomics, we previously identified chromogranin A (CgA) and clusterin (CLU) as disease-related proteins in the cerebrospinal fluid (CSF) of patients with multiple sclerosis (MS). CgA and CLU are involved in cell survival and are implicated in neurodegenerative disorders and may also have roles in MS pathophysiology. We investigated CgA and CLU expression in lesions and nonlesional regions in postmortem brains of MS patients and controls and in the brains of marmosets with experimental autoimmune encephalomyelitis. By quantitative PCR, mRNA levels of CgA and CLU were elevated in white matter but not in grey matter of MS patients. In situ analyses showed greater expression of CgA and CLU in white matter lesions than in normal-appearing regions in MS patients and in the marmosets, primarily in or adjacent to perivascular spaces and inflammatory infiltrates. Both proteins were expressed by glial fibrillary acidic protein-positive astrocytes. CgA was more localized in astrocytic processes and endfeet surrounding blood vessels and was abundant in the superficial glia limitans and ependyma, 2 CSF-brain borders. Increased expression of CgA and CLU in reactive astrocytes in MS white matter lesions supports a role for these molecules as neuro-inflammatory mediators and their potential as CSF markers of active pathological processes in MS patients.

BACKGROUND:Immunoglobulin G (IgG) effector functions are regulated by the composition of glycans attached to a conserved N-glycosylation site in the Fc part. Intrathecal production of IgG, especially IgG1, is a hallmark of multiple sclerosis (MS), but nothing is known about IgG Fc glycosylation in MS and in cerebrospinal fluid (CSF) in general.

RESULTS:Our experiments revealed four main results. First, IgG1 glycosylation patterns were different in CSF vs. serum, in the MS group and even in control donors without intrathecal IgG synthesis. Second, in MS patients vs. controls, IgG1 glycosylation patterns were altered in CSF, but not in serum. Specifically, in CSF from the MS group, bisecting GlcNAc were elevated, and afucosylation and galactosylation were reduced. Elevated bisecting GlcNAc and reduced galactosylation are known to enhance IgG effector functions. Third, hypothesis-free regression analysis revealed that alterations of afucosylation and bisecting GlcNAc in CSF from MS cases peaked 2-3 months after the last relapse. Fourth, CSF IgG1 glycosylation correlated with the degree of intrathecal IgG synthesis and CSF cell count. 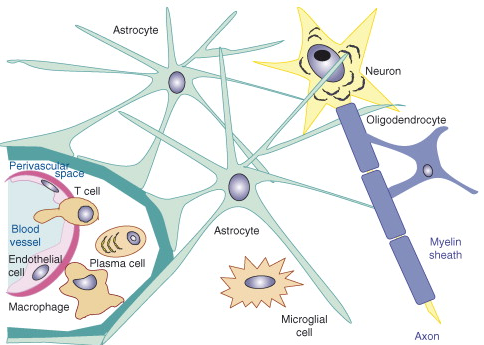 Figure: Astrocytes hold a strategic position in the CNS,
being in close contact to neurons, microglia, oligodendrocytes and other
astrocytes and with blood vessels. Following activation (for instance
during infection), astrocytes secrete factors that activate bystander
cells and increase BBB permeability, resulting in recruitment of immune
cells into the brain.

There is more to the inflammatory process than meets the eye. Meet three of the front line contenders: T and B cells with their global response capability and astrocytes which were initially felt to be gap fillers in the brain neural network, but now are understood to be active players in CNS innate immunity. The astrocytes, however are the only resident myeloid cells in the nervous system, and form a glia limitans around blood vessels restricting access of immune cells to the brain (see figure above).

It is possible that astrocytes are locally activated, as demonstrated in the first abstract with increased expression of both chromogranin and clusterin in MS white matter lesions and not grey matter. This may have something to do with the location of perivascular spaces, which are compartments that surround small blood vessels as they penetrate the brain, and are a site for immune cell accumulation during CNS inflammation.

The B/plasma cells on the other hand, among other things are defined by their antibody production. As I’ve alluded to in previous blog posts, we do not know what the oligoclonal bands are directed at. Maybe, it doesn’t really matter?! In the second abstract, the authors point out that MS CSF contains oligoclonal bands with a glycan pattern that enhances its effector function. It’s conceivable that the glycosylation process itself is what makes the unsuspecting immunoglobulin more pro-inflammatory than it intended to be? In fact, this process itself is not unique to MS and has been described in rheumatoid arthritis and neuromyelitis optica. Moreover, they also found that alterations in glycosylation patterns in the CSF occured shortly after a relapse. See a common theme here? As Carl von Clausewitz’s famous treatise On War goes: “War is fighting and operates in a peculiar element-danger. But war is served by many activities quite different from it, all of which concern the maintenance of the fighting forces. These preparatory activities are excluded from the narrower meaning of the art of war-the actual conduct of war, because they are concerned only with the creation, training, and maintenance of the fighting forces.”