Diagnostic and Prognostic Value of the Cerebrospinal Fluid Concentration of Immunoglobulin Free Light Chains in Clinically Isolated Syndrome with Conversion to Multiple Sclerosis.

BACKGROUND AND OBJECTIVE:In this study, we evaluated the diagnostic and prognostic significance of cerebrospinal fluid free light chains (CSF FLC) at the time of clinically isolated syndrome (CIS).


METHODS:We compared FLC-parameters at the moment of CIS in patients with conversion to multiple sclerosis (MS) after 2 years (CIS-MS), patients who remained stable both clinically and radiologically after 2 years (CIS-nonMS), patients with non-inflammatory neurologic diseases (NIND) as a comparison group and patients with other inflammatory neurologic diseases (IND) with intrathecal oligoclonal bands (OCB) synthesis. ROC-analysis was conducted to define FLC-assay characteristics and cut-off values. We also compared FLC-concentrations in CIS patients to determine their OCB-status. A correlation analysis was performed between FLC-concentrations and the expanded disability scale score (EDSS), annualized relapse rate (ARR) and MRI-activity (i.e., number of new and gadolinium-enhancing (Gd+) lesions) in patients. 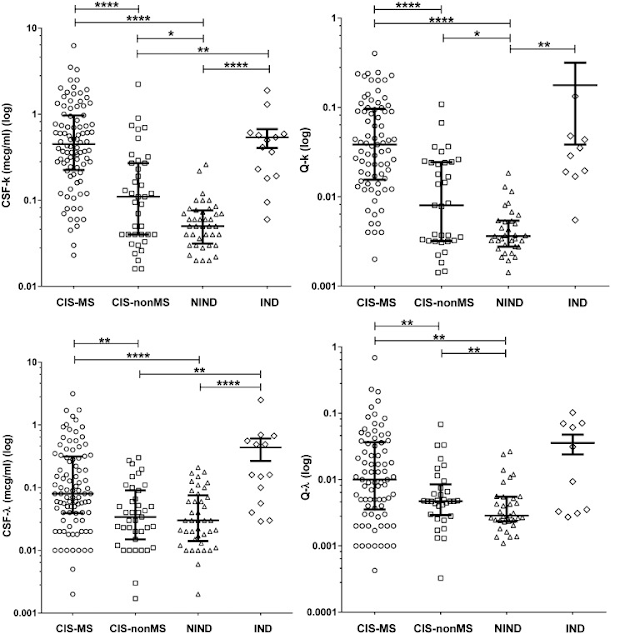 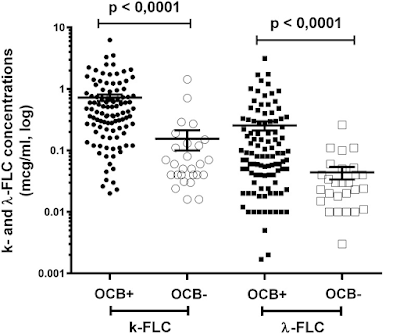 This work is not novel in its findings. Elevated levels of IgG which is oligoclonal has been described in PwMS as early as 1972 (i.e. the OCBs), and highlights the swings and roundabout approach to MS research. Hitherto, our interest in EAE had shifted the focus to T cell immunity, but we always knew at the back of our mind that the major immunological abnormality identified in PwMS (the OCB) is B cell related!
Why has there been stagnation in this area of research?
In the 80’s there were a series of studies looking at antibodies in the spinal fluid (CSF) of MS. They then identified high levels of antibodies to a number of viruses (measles, mumps, herpes simplex etc.), but it was not possible to associate any of these antibodies with OCB’s in the MS CSF. And to date, nor has it been possible to connect any specific virus to the development of MS! To add insult to injury, the basis for the local (i.e. intrathecal) production of OCBs and that of antiviral antibodies in MS remain to be elucidated.
All is not lost, we do in fact know that the conversion to being OCB positive after your first presentation of MS increases the likelihood of developing MS in the future. And the same applies for light chains (see figure below). When you study the light chain composition of OCB’s they either stain for IgG-kappa (k) or IgG-lamda (λ), with MS CSF being k predominant. It is generally also understood that the differences in light chain predominance may be indicative of differences in antigenic target, or the age of the person when the B-cell clones are triggered. Most recent work suggest that in individuals the different bands comprising the OCBs is clonally related.
It is also important to realise that free light chains and OCBs represent an ongoing targeted immune response in MS and not merely the end result. 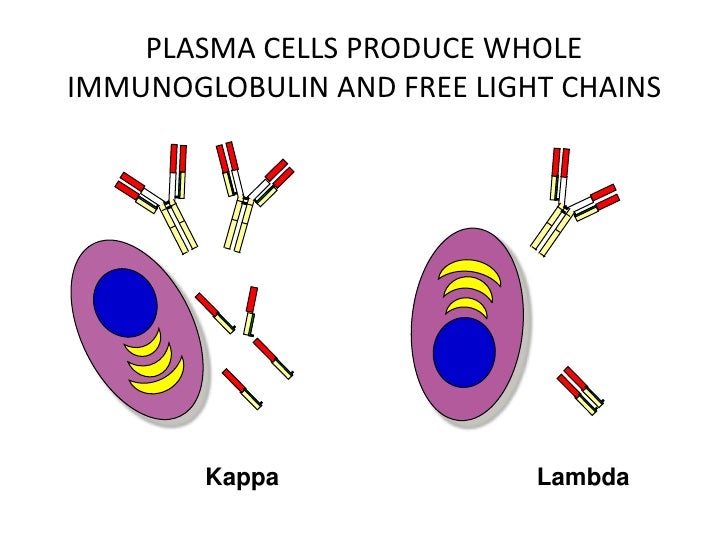 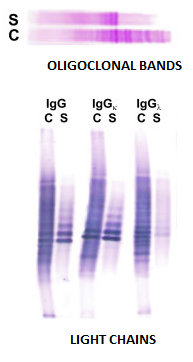