Multiple sclerosis (MS) is a chronic, inflammatory, demyelinating disease of the central nervous system, characterized by recurrent relapses of inflammation that cause mild to severe disability. Exposure to airborne particulate matter (PM) has been associated with acute increases in systemic inflammatory responses and neuroinflammation. In the present study, we hypothesize that exposure to PM<10 μm in diameter (PM10) might increase the occurrence of MS-related hospitalizations.

We obtained daily concentrations of PM10 from 53 monitoring sites covering the study area and we identified 8287 MS-related hospitalization through hospital admission-discharge records of the Lombardy region, Italy, between 2001 and 2009. We used a Poisson regression analysis to investigate the association between exposure to PM10 and risk of hospitalization.

A higher RR of hospital admission for MS relapse was associated with exposure to PM10 at different time intervals. The maximum effect of PM10 on MS hospitalization was found for exposure between days 0 and 7: Hospital admission for MS increased 42% (95%CI 1.39–1.45) on the days preceded by one week with PM10 levels in the highest quartile. The p-value for trend across quartiles was<0.001.

These data support the hypothesis that air pollution may have a role in determining MS occurrence and relapses. Our findings could open new avenues for determining the pathogenic mechanisms of MS and potentially be applied to other autoimmune diseases. 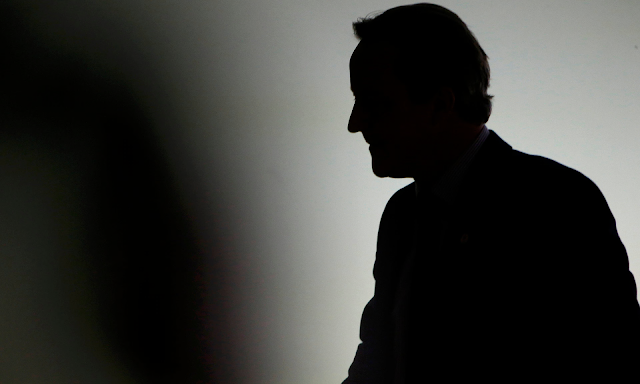 Picture: David Cameron’s (British PM) silhouette, before speaking at the Paris climate summit.
Recently, at the Paris climate summit David Cameron mentioned that he doesn’t want to let the grandchildren down –
“…just imagine for a moment, what we would have to say to our grandchildren if we failed? We’d have to say it was all too…DIFFICULT. And they would reply, what was so DIFFICULT? What was it that was so DIFFICULT when the Earth was in peril? When the sea levels were rising in 2015, when crops were failing, when deserts were expanding…What was it that was so DIFFICULT? Was it DIFFICULT to agree on 2 degrees? Was it DIFFICULT when 97% of scientists the world over have said that climate change is urgent and man-made and must be addressed….when there are 4000 pieces of literature and reviews making exactly this point? Why was it they would ask us sticking to 2 degrees at least above industrial levels so DIFFICULT? Presumably we might have to say, well it was DIFFICULT to reach a binding agreement…But they would ask us, why is it DIFFICULT to reach a legally binding agreement, when in 2015 there are already 75 countries, including countries across most of the continents of our world that already have legally binding climate change legislation?”
And along similar lines, we question the impact of particulate air pollution on public health?Respiratory and cardiovascular impact of air pollution is well understood, but not so much when it comes to evidence for exacerbation of neurological disorders.
In this study, MS admissions in the Lombardy Region (Italy) and the exposure to levels particulate air pollution (PM) in the days preceding the admission was evaluated. They found that if the average PM exposure in the 7 days before admission was in the highest end, there were 42% more admissions compared to the lowest end. The time intervals also indicate that this is an immediate risk rather than a delayed one.
This is not a novel concept, previously Oikonen and colleagues found a four-fold increase in MS relapse on days with higher PM exposure. Their explanation was that pollution may increase susceptibility to infections (and enhance antigen presentation), thereby triggering the relapse. Whereas, Heydarpour and colleagues in Tehran (Iran) found that MS cases showed a clustered pattern and there was a significant difference in PM exposure in MS cases compared to controls.
In the grand scheme of MS risk, exposure to particulate air pollution is a DIFFICULT concept to test, but unlike the others, not to treat. During the regency period, Bath, in England was a popular place for “taking the waters”; leaving London in their wake.
NB: I have no affiliation with the Conservative party.