Lipocalin-2 is increased in progressive multiple sclerosis and inhibits remyelination.

OBJECTIVE:We aimed to examine the regulation of lipocalin-2 (LCN2) in multiple sclerosis (MS) and its potential functional relevance with regard to myelination and neurodegeneration.

RESULTS:Intrathecal production of LCN2 was increased predominantly in patients with progressive MS (p < 0.005 vs relapsing-remitting MS) and displayed a positive correlation to neurofilament light (p = 0.005). Levels of LCN2 in brain microdialysates were severalfold higher than in the CSF, suggesting local production in progressive MS. Treatment with natalizumab in progressive MS reduced LCN2 levels an average of 13% (p < 0.0001). LCN2 was found to inhibit remyelination in a dose-dependent manner in vitro.

CONCLUSIONS:LCN2 production is predominantly increased in progressive MS. Although this moderate increase does not support the use of LCN2 as a biomarker, the correlation to neurofilament light and the inhibitory effect on remyelination suggest that LCN2 might contribute to neurodegeneration through myelination-dependent pathways. 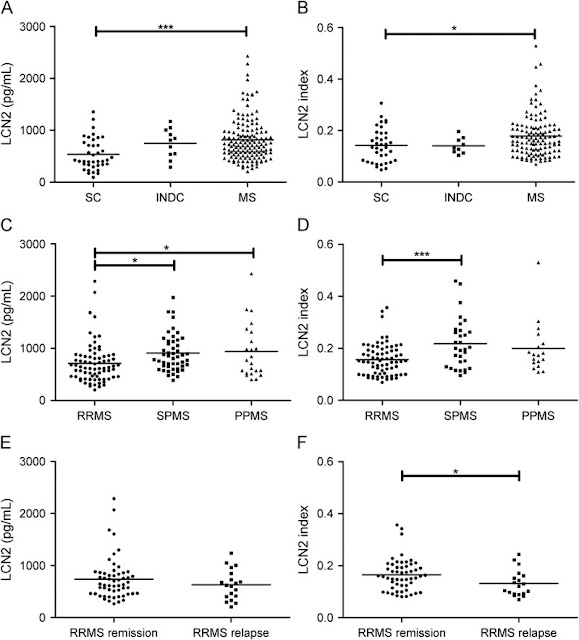 Figure: LCN2 levels are elevated in MS, in particular in those with progressive disease.
Lipocalin-2 (LCN2) is an acute phase protein produced by neutrophils (not commonly implicated in MS). The authors found that early exposure to LCN2 inhibited remyelination, but not induce demyelination in a myelination cell culture by 42% at moderate dose and 100% at a very high dose (1000ng/ml). LCN2 was also found to be high in brain tissue in progressive disease supporting a theory for local production. In the CSF of progressive patients it was also found to be slightly elevated. If we understand that natalizumab affects T cell migration into the CNS, it should not have a massive effect on LCN2 levels, and this is the case with only a 14% reduction evident after 60 weeks of treatment.
So what do we know about the state of neutrophils in MS? They are present in greater levels and exist in a primed state with enhanced degranulation and oxidative burst properties. It is thought that it is the inflammatory environment in MS that leads to the inappropriate neutrophil priming, but an alternative hypothesis is that the enhanced neutrophil activation is a response to infection which is what normally happens. Picture: An image of a neutrophil which has trapped bacteria (in red) in its extruded material forming a net-like web.