Is off-label prescribing the solution to the high-cost of MS DMTs in resource-poor settings? #MSBlog #PoliticalSpeak

“Did any of you read yesterday’s article by Sarah Boseley in The Guardian? If not you should. Almost all the points she makes about HIV, hepatitis C and cancer therapies are relevant to the management of multiple sclerosis (MS). The issues in the disease areas discussed in this piece dovetail to some extent with our off-label prescribing initiative and the Barts-MS essential off-label DMT list.”

Excerpt: …..Fifteen years on, it is no longer just the poor who cannot afford the drugs they need. New medicines for lethal diseases such as hepatitis C and cancer have been launched on the global market at such high prices that the richest countries in the world are having to find ways to ration them…..

“I assume most of you have read my previous posts on this issue that provide some context; firstly my reflections on my sabbatical visit to South Africa and my latest New Year’s resolution post. Over the last few week’s I have been trying to get support for this initiative from several of the MS charities and seem to have hit a brick wall. In short, most of the charities are not keen to endorse off-label prescribing. I get the sense the charities have concerns about undermining the bureaucratic decisions of esteemed bodies such as the EMA, FDA and NICE who make judgement calls based on the benefits and risks of drugs, and in the case of NICE their cost-effectiveness. I see the Charity’s point in relation to the off-label promotion of drugs that have been rejected by these organisations in the past. However, most of the proposed DMTs on our essential drug list have never been submitted to the EMA and FDA for approval in MS. Some of my colleagues have argued that most of these charities are conflicted as they receive some support from Pharma. This is a possibility, but their primary responsibility has to be to their constituents, which are pwMS in rich-countries, and not to pwMS in resource-poor countries.”

“Another route to getting wide acceptance of off-label prescribing would be via the WHO essential drugs list. I am aware this was recently tired for azathioprine and failed. I suspect MS is not on the WHO radar; we need to change this. I have recently been asked to join a working group of the MSIF  that will address this issue.”

“Some of the charities are however prepared to work with the Pharmaceutical industry to get affordable drug access schemes implemented in countries with unmet need. The latter however, requires logistics, time and money and it may be difficult to implement across the globe simultaneously. In addition, drug access schemes are unlikely to be implemented in middle income countries where there are established and profitable private healthcare markets, but still a large unmet need for large sections of the population that are not insured (e.g. South Africa, Egypt, etc.).”

“It is great to see that majority of you who responded to our off-label prescribing survey support the practice. Thank you we find this reassuring and hopefully we can extend this to our colleagues, politicians and other stakeholders. If we don’t it is pwMS living with untreated active MS who will pay the price.” 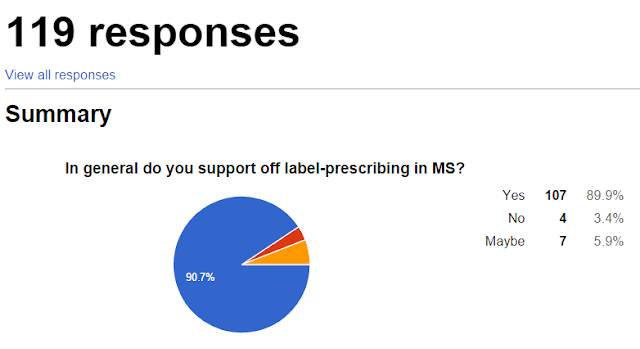 “At Barts-MS we need your help and are appealing to people who are interested in helping with this initiative to contact us. Please remember that outside of developed countries there is a massive unmet need with regard to the diagnosis and management of MS; we can do something about it. If you are interested in helping can you please sign-up to our initiative. Thank you.”