Could the pattern of IM explain the age of onset of MS? #ResearchSpeak #MSResearch #CrowdSpeak #CrowdacureMS


“I assume you have worked out by now that EBV is transmitted by saliva. In people who don’t get exposed to EBV in childhood tend to get infectious mononucleosis (IM) in adolescence or early adulthood when they start ‘kissing’ and/or exchanging saliva with other people. This is why IM is referred to as the ‘Kissing Disease’. It is interesting that in girls the peak age of onset is early adolescence (13-14 years of age). In males it is 3-4 years later (16-18 years of age). The 3-4 year age gap in term of IM onset has been explained by the observation that girls mature sexually and socially earlier than boys (in my school the older boys always tended to go out with younger girls and the older girls with boys who had already left school). What is also interesting that when it comes to age of onset of MS woman have a peak age of onset of disease 3 years earlier than men (see graph). Could this lag be the due to the average lag in IM peak incidence, or simply early EBV infection?” 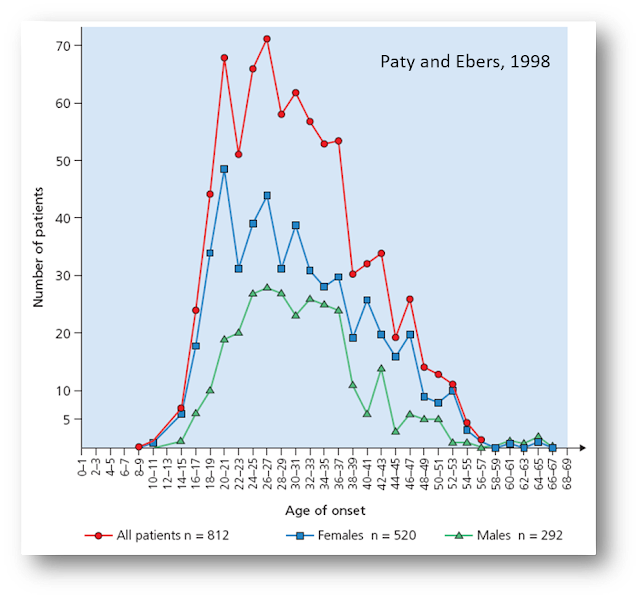 “It doesn’t matter how much you look at the data you can’t get away from the fact that IM is a very important risk factor for the development of MS. The important question we need to address is that if we prevent IM, with an EBV vaccine, or treat to reduce IM’s severity with an antiviral could we reduce the risk of people who get IM getting MS and other autoimmune diseases in the future? This is why The Charcot Project is so important. Developing effective drugs to suppress EBV infection could also open-up new opportunities to try and prevent MS, or at least treat IM. So if you are interested in helping us and engaging with our EBV research programme please consider donating money to our current crowdfunding project. I also want to thank the readers of this blog who have so generously donated money to our project already; it is much appreciated. The success so far has already exceeded our expectations!”

CoI: Team G will be recipients of a grant from Crowdacure to perform this research