OBJECTIVE: Multiple sclerosis (MS) is an inflammatory demyelinating disease of the central nervous system (CNS). Myeloid phagocytes, including blood monocytes recruited to demyelinating lesions, may play a dual role in MS: on one hand, they might enhance CNS damage after differentiating toward a proinflammatory phenotype; on the other, they promote remyelination and repair through effective phagocytosis of myelin debris. We have previously determined that the retinoid X receptor (RXR) plays an important role in monocyte phagocytosis of myelin. Peroxisome proliferator-activated receptor γ is an RXR binding partner that plays a key role in myeloid cell biology and is targeted by the thiazolidinedione group of anti-diabetics such as pioglitazone. Consequently, the purpose of this study was to determine if monocyte functions and differentiation profiles differ in MS patients compared to healthy volunteers (HV) and whether pioglitazone can reverse these differences to promote CNS recovery.
METHODS: Monocytes were isolated from MS patients and HV (n ≥ 36/group), and their ability to phagocytose myelin and modulate inflammation in the presence/absence of 1 μmol/L pioglitazone (the in vivo achievable concentration) was quantified by flow cytometry, transcriptional profiling, and proteomic assays.
RESULTS: MS monocytes display impaired phagocytosis of myelin debris and enhanced proinflammatory differentiation. Pioglitazone treatment causes partial normalization of identified monocyte abnormalities in MS and fully reverses the deficit in myelin phagocytosis.
INTERPRETATION:These findings suggest that by inhibiting proinflammatory differentiation of monocytes and enhancing their phagocytosis of myelin, pioglitazone may be a useful adjunct therapy to immunomodulatory agents that target dysregulated adaptive immunity in MS 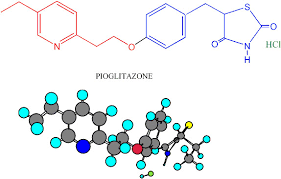 Pioglitazone selectively stimulates the nuclear receptor peroxisome proliferator-activated receptor gamma (PPAR-γ) and to a lesser extent PPAR-α. Whilst it is is not without its side effects, there has been a small study in MS suggesting that it can inhibit the formation of lesions. This study suggests that it can help macrophages to clean up the myelin debris and could perhaps speed up repair.