BACKGROUND AND PURPOSE:
The role of chitinases and chitinase-like proteins in multiple sclerosis (MS) is currently unknown; however, cerebrospinal fluid (CSF) levels of chitinase 3-like 1 (CHI3L1) predict prognosis in early MS. Whether this applies to other chitinases and chitinase-like proteins is yet to be established. Our objective was to investigate the potential of chitinase 3-like 2 (CHI3L2) and chitotriosidase as prognostic biomarkers in optic neuritis (ON) as the first demyelinating episode and to evaluate the ability of CHI3L2 to predict long-term MS risk and disability.
METHODS:
In a prospective cohort of 73 patients with ON as a first demyelinating episode and 26 age-matched healthy controls levels of CHI3L2 and chitotriosidase in CSF were explored by enzyme-linked immunosorbent assay. Associations with magnetic resonance imaging white matter lesions, CSF oligoclonal bands, immunoglobulin G index and leukocyte count were investigated. Long-term MS risk and disability (Expanded Disability Status Scale, Multiple Sclerosis Functional Composite components) were examined in a retrospective cohort of 78 patients with ON as the first demyelinating episode (mean follow-up 14 years). The predictive ability of CHI3L2 was compared with CHI3L1.

RESULTS:
Cerebrospinal fluid levels of CHI3L2 and chitotriosidase were significantly elevated in patients with ON and were associated with MS risk measures. CHI3L2 levels predicted MS development after ON (hazard ratio 1.95, P = 0.00039, Cox regression) and cognitive impairment by the Paced Auditory Serial Addition Test (P = 0.0357, linear regression) at follow-up. In a multivariate analysis of MS risk, CHI3L2 performed better than CHI3L1.
CONCLUSIONS:
CHI3L2 and chitotriosidase are promising biomarkers in patients with a first demyelinating episode. Our findings thus support a role for these proteins as biomarkers in early MS. 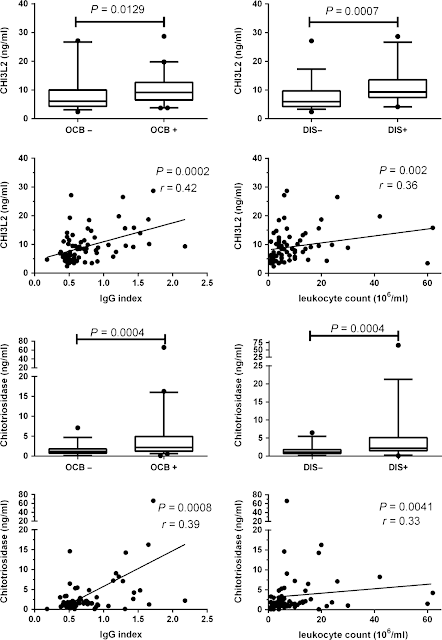 Figure: CHI3L2 and chitotriosidase and measures of MS risk. Levels in CSF in relation to oligoclonal bands, dissemination in space (DIS) on MRI (used to diagnose MS on repeat visit), IgG index (a measure of immune activity in the CSF) and CSF leukocyte/WBC count.

Predicting conversion to MS based on biomarkers at presentation is not a new thing. In fact, elevated neurofilaments (axonal proteins) and osteopontin (which leads to an enhanced Th1 immune response that is pro-inflammatory) have already demonstrated this.
Chitinase-3-like protein 1 (CHI3L1) and CHI3L2 are relatively new contenders in this respect. There exact role in MS also remains to be elucidated, although staining MS post-mortem brains have shown that it is primarily found in reactive astrocytes and microglia (or the innate immune system; part of the immune system that has proved difficult to target in terms of treatment).

CHI3L1 was first reported by Comabella in 2010 to be raised in those who converted to MS than in those who remained with a single event (or clinically isolated syndrome, or CIS). It has since been reproduced in two other independent studies, and this one, which adds further information suggesting that CHI3L2 is better than CHI3L1 in its predictive capacity. They also allude to there being a good correlation with both biological (OCB+ and elevated IgG index) and structural measures (MRI dissemination in space/DIS) of disease activity (see above figure). Also, not surprisingly they report that CHI3L2 levels correlate reasonably well with both neurofilament and osteopontin levels (remember these two biomarkers are also predictive of conversion to MS!).

Where does this leave us in clinical practice? The question is whether chitinase would be useful predictive biomarker at an individual level – which means a longitudinal study needs to be performed before it can be clinic ready. Remember the saying ‘three victories don’t make you a conqueror’? Well the same applies here. However, the transfer of biomarkers from the bench to the bedside is a worthy goal. We are now testing neurofilaments in PwMS at Barts Health in whom we are suspicious that there is break though disease activity, and it’s proving to be an interesting learning exercise for both parties.