It is clear that B cells play a central role in pathogenesis of MS, could the role for plasma cells be even bigger?

1. MS has not be seen in people who don’t make immunoglobulins due to rare genetic disorders (agammaglobulinaemia).

2. Oligoclonal IgG bands are invariably found in the cerebrospinal fluid (CSF) and brain/spinal tissues of MSers. These immunoglobulin bands have been highly selected; in other words whatever is driving their production is getting help from other cells (antigen presenting cells and T cells). This selection process is typically seen with infections or foreign antigens (proteins).

“If we can uncover what these OCBS are reacting with we will uncover the cause of MS.”

MSers who don’t have these oligoclonal bands have a more benign course; this applies to MSers with relapse-onset MS and PPMS.

“OCB-negative MSers don’t have ‘classic MS’ and if I had my way they would be given a separate diagnosis or at a minimum a definitive MS should be delayed; this is particularly important when diagnosing PPMS! This is another reason why lumbar punctures and spinal fluid analysis should be done in all MSers. You only get one chance not to make the diagnosis of MS and that is in the beginning, or the diagnostic phase, of the disease. Spinal fluid analysis helps you exclude other conditions and tells you if you have OCBs or not.”

3. B-cell follicles, were the B-cells mature and become antibody factories or plasma cells, are found in CNS of MSers. These are ectopic follicles as they are normally found in lymph nodes and the spleen. These follicles appear to be more common in progressive MSers and appear to be driving the cortical, or gray matter, pathology. The current thinking is the gray matter pathology is what drives the clinically-apparent progressive phase of the disease.

4. Pathological studies show immunoglobulin deposits in the brains of MSers and associated complement activation. Complement is one of the molecules that certain classes of immunoglobulins use to damage or kill target cells and organisms. Interestingly in the, now famous, Barnett and Prineus lesion immunoglubluin deposition was seen without the classic T cell infiltrates. Many of us now consider this to be the earliest relapse-causing lesion and based on the observations in these lesions immunoglobulins seem to be is very important inflammatory mediators.

5. B cells are the cells were EBV, the virus that is causally linked to MS, resides.

“Could the B cell be the Trojan horse that takes EBV into the brain and spinal cord? Unfortunately, the evidence on this topic is rather mixed at present, but I suspect the B-cell is the cell that EBV hitches a ride in.”

6. Most if not all highly effective MS DMTs target B cells.

“This is an observation that I made several years ago! The one exception is daclizumab and working out how this drug works in MS will be very important.”

7. Targeted anti-B cell therapies (anti-CD20 – rituximab, ocrelizumab, ofatumumab) are among the most promising emerging MS therapies. There superior efficacy was not expected given the current dogma that MS is T-cell driven disease. 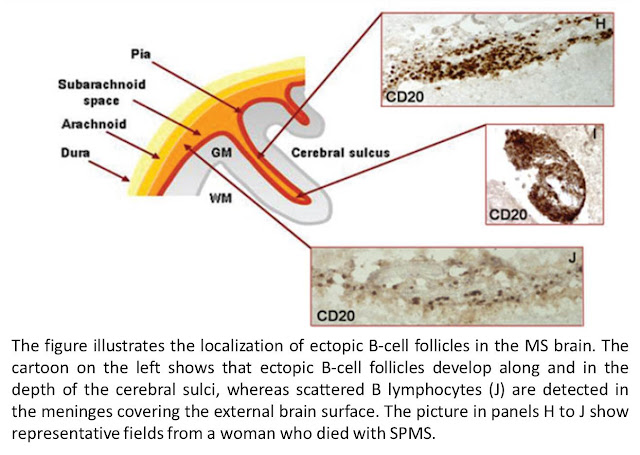 O Plasma-cell, Plasma-cell, wherefore art thou Plasma-cell? Deny thy father and refuse thy name; or if thou wilt not, be but sworn my love and I’ll no longer be a T-cell. Shall I hear more, or shall I speak at this? ‘Tis but thy name that is my enemy: thou art thyself, though not a B-cell.