Minimally invasive detection of cell death could prove an invaluable resource in many physiologic and pathologic situations. Cell-free circulating DNA (cfDNA) released from dying cells is emerging as a diagnostic tool for monitoring cancer dynamics and graft failure. However, existing methods rely on differences in DNA sequences in source tissues, so that cell death cannot be identified in tissues with a normal genome. We developed a method of detecting tissue-specific cell death in humans based on tissue-specific methylation patterns in cfDNA. We interrogated tissue-specific methylome databases to identify cell type-specific DNA methylation signatures and developed a method to detect these signatures in mixed DNA samples. We isolated cfDNA from plasma or serum of donors, treated the cfDNA with bisulfite, PCR-amplified the cfDNA, and sequenced it to quantify cfDNA carrying the methylation markers of the cell type of interest. Pancreatic β-cell DNA was identified in the circulation of patients with recently diagnosed type-1 diabetes and islet-graft recipients; oligodendrocyte DNA was identified in patients with relapsing multiple sclerosis; neuronal/glial DNA was identified in patients after traumatic brain injury or cardiac arrest; and exocrine pancreas DNA was identified in patients with pancreatic cancer or pancreatitis. This proof-of-concept study demonstrates that the tissue origins of cfDNA and thus the rate of death of specific cell types can be determined in humans. The approach can be adapted to identify cfDNA derived from any cell type in the body, offering a minimally invasive window for diagnosing and monitoring a broad spectrum of human pathologies as well as providing a better understanding of normal tissue dynamics. 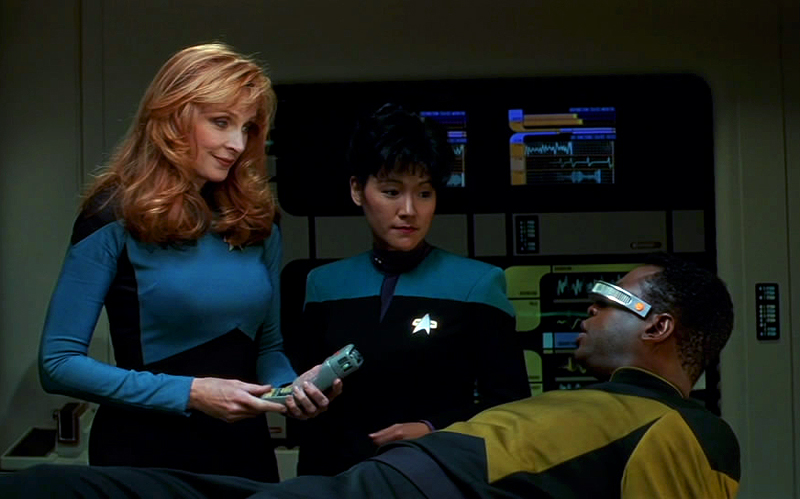 Figure: The tricorder, a handheld device combining sensors, recorders and built-in computing capability. As of 2366, the standard model could not detect subspace phenomena or neutrino particles (info from http://www.startrek.com)

Admittedly, this work is a long way from the medical tricorder, and involves machines much larger by comparison; but I wonder if the authors themselves realize the potential for their work?

Cell-free circulating DNA (cfDNA) are small fragments released by dead cells in the body, on average there are 5,000 genome equivalents/ml. As cell death occurs in many disorders affecting the human body, the ability to pick up this damage early on before there is functional consequence (for example, weakness) would be invaluable diagnostically, and also allows potential therapeutic windows to be accessed early on.

The DNA of each cell type can be identified by the methylation markers it carries, which are unique to that cell type and conserved in other cells of the same tissue in an individual and between individuals. The DNA methylation pattern of the cfDNA can therefore be used to identify the tissue of origin, as well as cell death in the source tissue/organ.

Here, they describe evidence of oligodendrocyte (myelin) cfDNA circulating in the blood of MS subjects and those with neuromyelitis optica. It is likely that the breakdown in the blood-brain barrier facilitates the transfer of these fragments into the blood.

I live in hope that this comes in hand held device, what I wouldn’t do to have the capability on my rounds!