“If you have MS you will be aware by now, particularly if you read this blog regularly, that smoking is bad for you. MSers who smoke do worse in the long-term than MSers who don’t; smokes enter the clinically apparent progressive phase of the disease earlier and have more rapid progression.”


“Based on these observations you may have decided to stop smoking, or you may want to stop but can’t because you are addicted to nicotine. You may already have tried nicotine replacement therapy already in the form of gum or skin patches and failed. This is not surprising as these routes of administration don’t give your brain the necessary nicotine ‘hit’ it craves. What about electronic or e-cigarettes? E-cigarettes are much safer than ordinary cigarettes and administer nicotine the way the brain likes, and wants, it.” 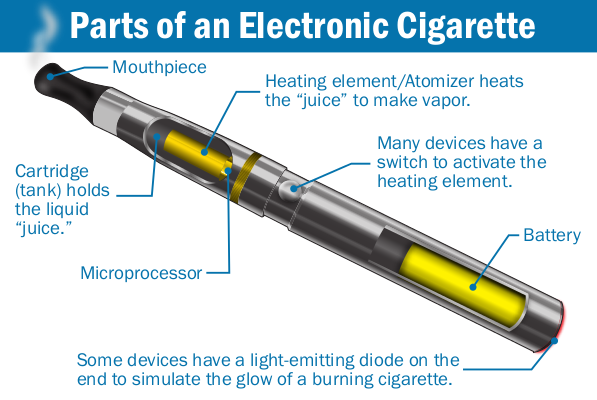 “The following perspective in this week’s NEJM highlights some of the political battles being fought over e-cigarettes. In England we view e-cigarettes as a solution to many of the health problems associated with cigarettes. In the USA e-cigarettes are viewed as being bad as cigarettes and simply another way to get the next generation addicted to nicotine. Who will win out England or the USA in terms of health policy and attitudes to e-cigarettes? In my role as a neurologist looking after individual patients with MS I have a responsibility to advise and help individual patients stop smoking; it is part of our the holistic approach management of MS. It is also part of our brain health initiative. If e-cigarettes help achieve that aim at an individual patient level then I am a big supporter of England’s policy and hope it wins out over US policy. What do you think?”

…. Tobacco-control advocates have been embroiled in a multiyear controversy over whether electronic cigarettes threaten the goal of further reducing tobacco smoking or offer the possibility of minimizing harm for people who cannot or will not quit smoking conventional cigarettes. England and the United States have now staked out very different positions…..


….. The international landscape was dramatically reshaped in August 2015, when Public Health England (PHE), an agency of England’s Department of Health, released a ground-breaking report, “E-cigarettes: an evidence update.” With its claim that e-cigarettes are 95% less harmful than combustible cigarettes, the report attracted headlines internationally. It recommended that smokers who cannot or will not quit smoking tobacco try e-cigarettes and expressed great concern that the public perceived the two products as posing equal risks. Strikingly, the report underscored e-cigarettes’ potential to address the challenge of health inequalities, a central mission of PHE, stating that these devices “potentially offer a wide reach, low-cost intervention to reduce smoking and improve health in these more deprived groups in society where smoking is elevated.”….

…… As dramatic as the report’s recommendations appear to be, they built on the United Kingdom’s long-standing commitment to harm reduction. In 1926, the Ministry of Health’s Rolleston Committee concluded that drug addiction was an illness that should be treated by physicians, sometimes with a minimal dose of drugs in order to prevent withdrawal symptoms…..

…… When AIDS came to the United Kingdom in the 1980s, the first government report on human immunodeficiency virus (HIV) infection among injection-drug users encouraged safer drug practices. Meanwhile, the United States took a prohibitionist position. Tight narcotic regulation and refusal to provide narcotics to addicts as treatment or maintenance defined the U.S. posture for decades……


……. Application of harm-reduction principles to tobacco products debuted in England in the 1970s, at the Institute of Psychiatry of the Maudsley Hospital. In 1976, Michael Russell, pioneer of effective nicotine-cessation treatments, famously wrote that “People smoke for nicotine but they die from the tar,” suggesting that one could satisfy a nicotine craving without risking the harms caused by smoking. Professional medical bodies in the United Kingdom endorsed a harm-reduction perspective……

……. What distinguishes the harm-reduction approach taken in the PHE report from the more absolutist approach adopted by U.S. policymakers today is a matter of focus. In England, where leading medical organizations regard nicotine alone as relatively benign, the pressing need to reduce the risks for current smokers frames the debate. The overwhelming focus in the United States is abstinence. It is in this broader context that the focus on children and non-smokers must be viewed…..


……. Will England change the international conversation about e-cigarettes? The answer will depend, in part, on what the evolving evidence suggests, and it may take years before the answers are definitive. In the end, the sorts of policies that are implemented will depend on whether whoever dominates the debate views harm reduction as opportunity or anathema…..