“It is time to ditch the term induction therapy and invent a new one? The term ‘induction’ is not a very useful term when describing the mode of action of alemtuzumab, cladribine and HSCT, because it comes with baggage and is often misrepresented. I am now beginning to realise that most people in the field equate the term ‘induction’ with the use of high-efficacy treatment early on in the course disease. For example, at the AAN I heard several people refer to the use of natalizumab as a first-line therapy as an induction strategy. Similarly, the use of mitoxantrone before interferon-beta or glatiramer acetate is frequently referred to as induction strategy (see below). Therefore, I think it is time to rebrand ‘induction’ therapies with a term that describes their mode of action and usage more clearly. Dare I suggest the term ‘pulsed immune-reconstitution therapy/ies’ or ‘PIRT(s)‘. The term pulsed gets across the concepts of short intermittent courses and immune reconstitution explains how these drugs probably work.

PIRTs have many advantages over maintenance therapies, which I have highlighted in the past. The main advantage is that PIRTs (1) they tend to be on average highly-effective treatments, (2) they only remain in the body for a short period of time, which is a very useful attribute if you are a woman who is thinking about falling pregnant, (3) they induce long term remission in some patients, which may turn out to be a cure in the future and (4) they frontload risk. Most of the adverse events associated with PIRTs occur early in the treatment hence the term frontloading. In comparison with maintenance therapies the risks accumulate over time. The latter point is not a trivial point; with immunosuppressive drugs the risks of opportunistic infections and treatment-related malignancies increases with time.”


OBJECTIVES: The long-term impact of interferon-beta-1b (IFN) might be improved by short-term immunosuppression with mitoxantrone (MITOX) in aggressive relapsing-remitting multiple sclerosis (ARMS) patients.

METHODS: In this 3-year clinical and MRI study, 109 ARMS patients (two or more relapses in the previous 12 months and one or more gadolinium (Gd)-enhancing MRI lesion) were randomised into two groups: 54 patients received MITOX monthly (12 mg/m(2); maximum 20 mg) combined with 1 g of methylprednisolone (MP) for 6 months followed by IFN for the last 27 months, and 55 patients received IFN for 3 years combined with 1 g of MP monthly for the first 6 months. The primary endpoint was the time to worsen by at least one Expanded Disability Status Scale point confirmed at 3 months.


RESULTS: The time to worsen by at least one Expanded Disability Status Scale point confirmed at 3 months was delayed by 18 months in the MITOX group compared with the IFN group (p<0.012). The 3-year risk of worsening disability was reduced by 65% in the MITOX group relative to the IFN group (11.8% vs 33.6%). MITOX patients had a reduced relapse rate by 61.7%, a reduced number of Gd-enhancing lesions at month 9 and a slower accumulation of new T2 lesions at each time point.

CONCLUSIONS: Although there were limitations in this investigator-academic-driven study, the data do suggest that mitoxantrone induction therapy prior to INF beta-1b may have a role in aggressive disease. 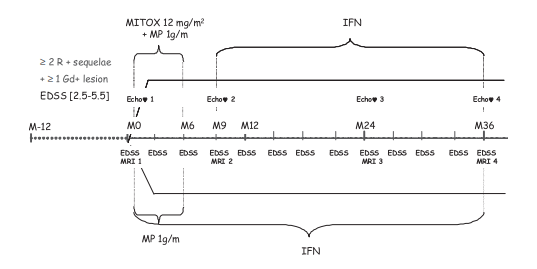 Background: Mitoxantrone has been approved by the FDA for worsening relapsing remitting and secondary progressive Multiple Sclerosis. However the benefits of this agent in reducing disease progression and relapse rate cannot be sustained in the long-term, as treatment is limited by the potential for cumulative cardiotoxicity.


Objectives and methods: We report our experience utilising Glatiramer Acetate as maintenance immuno-modulatory treatment following initial immunosuppression with Mitoxantrone in a consecutive series of 27 patients with very active relapsing remitting disease, eight of whom had experienced continuing relapse activity on first-line treatment.


Results: Duration of treatment with Mitoxantrone and thereby cumulative dose were reduced as our experience with the combination increased.No unanticipated side effects of combination treatment were encountered over a follow-up period of 66 months. A single patient developed therapy related acute leukaemia (TRAL) 9 months after completion of Mitoxantrone.A sustained 90% reduction in annualised relapse rate (p < 0.001) has been observed. Disability is stable or improved in all patients a mean of 36 (16-66) months from initiation of treatment. Early suppression of relapse activity with Mitoxantrone has been maintained at a mean of 22 months from last dose of this agent. Only two relapses have occurred in the cohort since withdrawal of Mitoxantrone, occurring in the two patients who had previously been treated with Glatiramer Acetate. In 9 of the first 10 patients treated, imaged a mean of 27 months after withdrawal of Mitoxantrone, no enhancing lesions were identified on MRI brain scans.


Conclusions: Glatiramer Acetate appears a safe and effective option for continuing disease modification in patients with relapsing remitting multiple sclerosis treated with Mitoxantrone. The treatment protocol utilised in later patients in this series appears to have the potential to limit exposure to this agent. 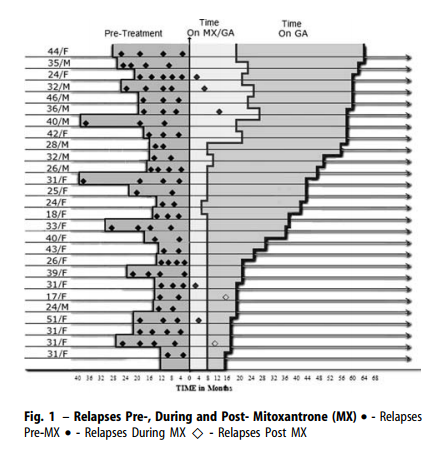