Brain plasticity is the basis for systems-level functional reorganization that promotes recovery in multiple sclerosis (MS). As inflammation interferes with plasticity, its pharmacological modulation may restore plasticity by promoting desired patterns of functional reorganization. Here, we tested the hypothesis that brain plasticity probed by a visuomotor adaptation task is impaired with MS inflammation and that pharmacological reduction of inflammation facilitates its restoration. MS patients were assessed twice before (sessions 1 and 2) and once after (session 3) the beginning of Interferon beta (IFN beta), using behavioural and structural MRI measures. During each session, 2 functional MRI runs of a visuomotor task, separated by 25-minutes of task practice, were performed. Within-session between-run change in task-related functional signal was our imaging marker of plasticity. During session 1, patients were compared with healthy controls. Comparison of patients’ sessions 2 and 3 tested the effect of reduced inflammation on our imaging marker of plasticity. The proportion of patients with gadolinium-enhancing lesions reduced significantly during IFN beta. In session 1, patients demonstrated a greater between-run difference in functional MRI activity of secondary visual areas and cerebellum than controls. This abnormally large practice-induced signal change in visual areas, and in functionally connected posterior parietal and motor cortices, was reduced in patients in session 3 compared with 2. Our results suggest that MS inflammation alters short-term plasticity underlying motor practice. Reduction of inflammation with IFN beta is associated with a restoration of this plasticity, suggesting that modulation of inflammation may enhance recovery-oriented strategies that rely on patients’ brain plasticity. 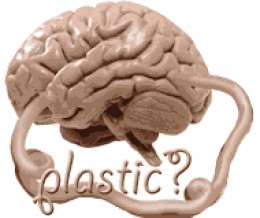 The brain is plastic….not made out of plastic but plastic in that it is fluid and adaptable ,such that we make memories and learn and adapt to the situation. This can also mean that after damage the brain can adapt to reduce the influence of this damage. It does this by making new connections or “synapes” such that information can get to where it needs to get  to make change. In this study they measured the capacity to perform, and remember a visual task. This was reduced in people with MS but even treatment with interferon that reduced inflammation if helped in plastic response. So conclusion is on balance inflammation in the brain is a bad thing. We don’t want it.