Bethoux F, Marrie RA.A Cross-Sectional Study of the Impact of Spasticity on Daily Activities in Multiple Sclerosis. Patient. 2016. [Epub ahead of print]

BACKGROUND:Spasticity is frequently reported by patients with multiple sclerosis (MS). A previously published survey of participants in the North American Research Committee on Multiple Sclerosis (NARCOMS) registry showed that higher levels of spasticity were associated with higher MS-related disability and lower quality of life, but did not investigate the impact of spasticity on daily activities, and only partially assessed spasticity management.
METHODS: A new cross-sectional survey was distributed to 15,679 eligible NARCOMS participants. We inquired about the degree of bother from symptoms associated with spasticity, interference with a variety of daily activities, as well as past and current treatments for spasticity.
RESULTS:Among the 10,353 responders (66 % response rate), over 80 % reported experiencing spasticity, and more than 35 % were moderately or greatly bothered by stiffness, spasms, or pain, predominantly in the lower extremities. More severe spasticity was associated with worse disability, mobility, bladder function, and fatigue. Spasticity was most frequently reported to interfere with stair climbing, walking, and sleep. Most individuals reported receiving treatment for spasticity (mainly oral medications, stretching, home exercise, and physical therapy), yet fewer than half reported being satisfied with their current treatment.
CONCLUSION:Spasticity was reported by a large majority of patients with MS, and found to interfere with many daily activities. At the same time, patients were often dissatisfied with the effects of treatments for spasticity. Prospective studies are needed to better characterize the impact of spasticity in individuals with MS, and to optimize treatment strategies. 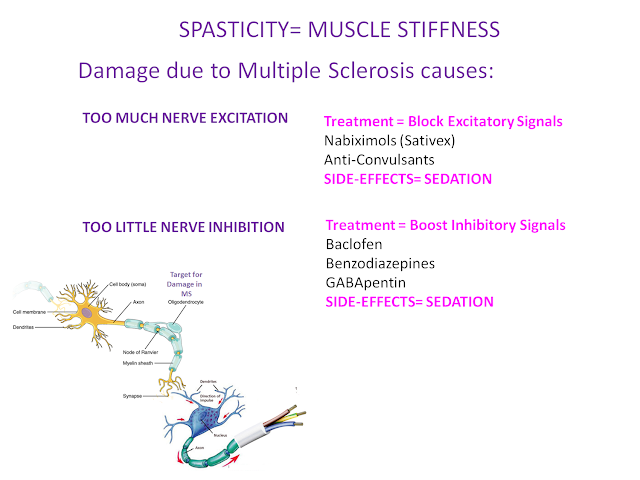 Spasticity is a common problem in MS and this occurred in many people doing a NARCOMS survey.

Many people were dissatisfied with their treatment, maybe because they don’t work well enough but probably because they all come with unwanted side effects. One of the main ones is because the drugs used to suppress spasticity are inhibitory of nerve transmitter function and so dampen down all nerve transmission, so as well as hitting spasticity they block the other nerve pathways causing sedation. Wouldn’t it be good, if we could work how to target disease related problems and leaving the other nerve functions intact.

COI We are developing a treatment for spasticity