The Research Excellence Framework (REF) is a method of how the UK Government assesses Reserach Excellence and this dictates how it gives £2 billion a year to Higher Education Centres. This occurs every 5-6 years and the next one in in 2020/2021.


In the past the Universities have selected who they return (you only get paid for those you submit), based on their performance which influences their ranking. They play as many mind games as possible within the rules to maximize their chances of a high ranking


This process costs hundreds of millions of Pounds. But we all know Cambridge will come top and the top 5 can be predicted.


This created a culture of bullying in some places and there was a case last time when a person sent out a global email complaining of the bullying threat of sacking and stress that the reseach had been put under…to which you thought they are going to get sacked…only to find out that this was a timed launch and the person had commtted suicide two weeks before.


It also created a transfer market were salararies and lab funds could be boosted by the cost of poaching,or stopping poaching to keep staff, so that places can boost their ranking and hnce cash.


The rules have been changing each year so what’s in store for  REF 2020/2021. Well we had some in sight this week with the publication of the Lord Stern Report .


President of the British Academy Lord Nicholas Stern was commissioned by the government to carry out the review of the Research Excellence Framework (REF) to ensure future university research funding is allocated more efficiently, offers greater rewards for excellent research and reduces the administrative burden on institutions.

Recommendation 1: All research active staff should be returned in the REF. So no fudge factor but those under performing in research will become treachers

Recommendation 2: Outputs should be submitted at Unit of Assessment level
with a set average number per FTE but with flexibility for some faculty members
to submit more and others less than the average.
Rather than asessing the indivduals within the unit on their research outputs the Unit gets assessed on its research outputs so less emphasis of the individual so the the stars of the unit can contribute more and the not so big stars can constribute less than currently in place. This would make it cheaper for the institutions to do

Recommendation 3: Outputs should not be portable.
So work done in one place can’t be used to support the rankings in another place so now the transfer window is closed.

This means no University is going to buy in a mega MS Research lab  and give them losts of cash just before the next ref, they are not going to coax in  some Foreign MS Research Lab to take their past track record. Now it is going to be based on future potential not past glory. So the transfer market would swtich not to the end of the REF cycle but to the beginning, with the risk of underperformance if the facilities needed are not in place. You always have downtime with a move. 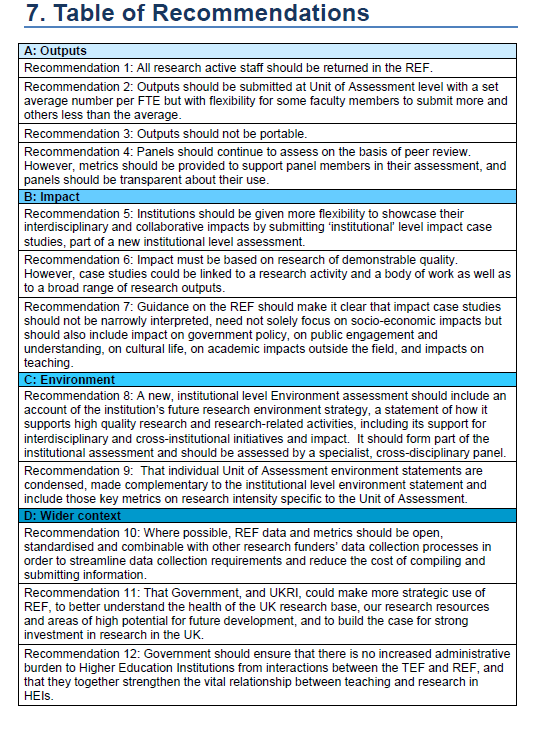 Let’s see what gets adopted, but the Head Honchos will be thinking how to maximize their output. However some of the moves like stopping the outputs being portable should have been implemented many years ago, but if it had, TeamG would not be at Barts one suspects ,as we moved in the transfer window.