OBJECTIVES: Test a miniaturized neurostimulator transforaminally placed at the dorsal root ganglion (DRG) and evaluate the device’s safety and efficacy in treating failed back surgery syndrome (FBSS) low back pain.
SUBJECTS:Eleven subjects with chronic intractable neuropathic trunk and/or lower limbs pain were included.
METHODS:The system consisted of an implantable, miniaturized stimulator, provided by Stimwave Technologies (Freedom-4) and an external transmitter. Only one stimulator per subject was implanted unilaterally (one-one side) at L1 to L5 levels. During Phase 1 of the study, the stimulators were not anchored. In Phase 2, the stimulators were anchored. Subjects were treated during 45 days after which the stimulator was removed. Pain reduction, implant duration, and stimulator migration were registered.
RESULTS: Overall pain reduction was 59.9%, with only one device placed at one location, covering only a portion of the painful areas in the majority of the subjects. In Phase 1, the non-anchored stimulators migrated (moved) a mean of 8.80 mm and in Phase 2 a mean of 1.83 mm. Stimulator migration did not correlate with changes in pain relief. Mean time-to-implant duration was 10 minutes and no adverse events were reported during implant, follow-up period, or after explant.
CONCLUSIONS: The pain reduction results indicate that the spinal cord stimulation (SCS) Wireless System is a viable treatment of low back pain through stimulation of the DRG, and better overall pain reduction may be achieved by implanting multiple devices (apparently 8 can be used)  With short percutaneous implant times and excellent safety profile, this new system may offer health cost savings.

Stories reaching the papers have suggested that minichips implanted can control pain. This is an early study but they implant a microchip that can set off vibrating signals when it gets power from a transmitting/recieving device that you can keep in your pocket.

Surprisingly we are using the same technology  to do something completely different (Above you can see a beasty chip) The chip can sit inside a needle (see below) and these can be injected under the skin in a procedure that takes a few seconds.

In this study they were implanting the chip in the spine so it took 10mins. In the animals if the chip is within 8cm of the base it can get electrically charged (a bit like an electric toothbrush getting charged on its charger). It can also transmit information.

In the animal chips it can send an identification number (like a chip in your dogs and cats..which work on the same principle), temperature, heart beats, etc depending on the chip. In this study it can make the chip vibrate to create a nerve signal.

In the human study these measure 1.3mm x 3mm and can be charged from a transponder/detector. these were implanted near the spine in the epidural space on the dorsal root ganglion which is where the nerve cell bodies of sensory nerves enter the spine.

Acute pain occurs when a pain receptors sense a pain full signal, e.g. heat, cold and sends a signal up these sensory nerves and then they join with nerves in the spinal cord that send signals up to your brain that says “ouch” (It sends a signal back move your hand away from the painful stimulus. In MS, often that pain signal does not start in a pain receptor that goes up a sensory nerve into the spine, but the signal is spontaneously started in the spine in areas of nerve damage. In this study the chip transmits a buzz that is sent up the sensory nerve pathways and it scrambles the painful nerve signal being generated in the spinal cord such that it becomes less painful.

So this is like a mini TENS machine Transcutaneous electrical nerve stimulation (TENS) is a method of pain relief involving the use of a mild electrical current.

A TENS machine is a small, battery-operated device that has leads connected to sticky pads called electrodes.

You attach the pads directly to your skin. When the machine is switched on, small electrical impulses are delivered to the affected area of your body, which you feel as a tingling sensation.

The electrical impulses can reduce the pain signals going to the spinal cord and brain, which may help relieve pain and relax muscles. They may also stimulate the production of endorphins, which are the body’s natural painkillers.

These work may because of the 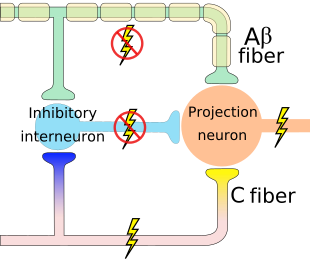 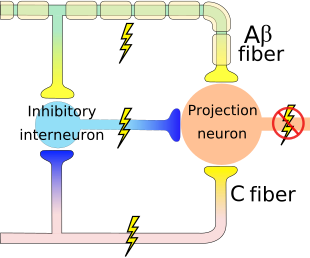 Firing of the Aβ fibres activates the inhibitory interneuron, reducing the chances that the projection neuron will fire, even in the presence of a firing nociceptive fibre.

Gate control theory asserts that activation of nerves which do not transmit pain signals, called non-nociceptive fibres, can interfere with signals from pain fibres, thereby inhibiting pain. Afferent pain-receptive nerves, those that bring signals to the brain, comprise at least two kinds of fibres – a fast, relatively thick, myelinated “Aδ” fibre that carries messages quickly with intense pain, and a small, unmyelinated, slow “C” fibre that carries the longer-term throbbing and chronic pain. Large-diameter Aβ fibres are non-nociceptive (do not transmit pain stimuli) and inhibit the effects of firing by Aδ and C fibres.
The peripheral nervous system has centres at which pain stimuli can be regulated. Some areas in the dorsal horn of the spinal cord that are involved in receiving pain stimuli from Aδ and C fibres, called laminae, also receive input from Aβ fibres. The non-nociceptive fibres indirectly inhibit the effects of the pain fibres, ‘closing a gate’ to the transmission of their stimuli. In other parts of the laminae, pain fibres also inhibit the effects of non-nociceptive fibers, ‘opening the gate’. This presynaptic inhibition of the dorsal nerve endings can occur through specific types of GABAA receptors regulate nociception and paintransmission.
An inhibitory connection may exist with Aβ and C fibres, which may form a synapse on the same projection neuron. The same neurons may also form synapses with an inhibitory interneuron that also synapses on the projection neuron, reducing the chance that the latter will fire and transmit pain stimuli to the brain (image on the right). The inhibitory interneuron fires spontaneously.The C fibers synapse would inhibit the inhibitory interneuron, indirectly increasing the projection neuron’s chance of firing. The Aβ fibre, on the other hand, forms an excitatory connection with the inhibitory interneuron, thus decreasing the projection neuron’s chance of firing (like the C fibre, the Aβ fibrer also has an excitatory connection on the projection neuron itself). Thus, depending on the relative rates of firing of C and Aβ fibres, the firing of the non-nociceptive fibre may inhibit the firing of the projection neuron and the transmission of pain stimuli.
Gate control theory thus explains how stimulus that activates only nonnociceptive nerves can inhibit pain. The pain seems to be lessened when the area is rubbed because activation of non-nociceptive fibres inhibits the firing of nociceptive ones in the laminae. In trans-cutaneous electrical nerve stimulation (TENS), non-nociceptive fibres are selectively stimulated with electrodes in order to produce this effect and thereby lessen pain.
One area of the brain involved in reduction of pain sensation is the periaqueductal gray matter that surrounds the third ventricle and the cerebral aqueduct of the ventricular system. Stimulation of this area produces analgesia (but not total numbing) by activating descending pathways that directly and indirectly inhibit nociceptors in the laminae of the spinal cord.Descending pathways also activate opioid receptor-containing parts of the spinal cord.
Afferent pathways interfere with each other constructively, so that the brain can control the degree of pain that is perceived, based on which pain stimuli are to be ignored to pursue potential gains. The brain determines which stimuli are profitable to ignore over time. Thus, the brain controls the perception of pain quite directly, and can be “trained” to turn off forms of pain that are not “useful”. (Thanks to wikipedia)

Would this approach work in MS?


Does TENS work for you? If so maybe there may be merit in this system. Time will tell