Progressive Dwindling in Multiple Sclerosis: An Opportunity to Improve Care.

In the general ageing population, 40% of deaths occur following a prolonged trajectory of “progressive dwindling,” characterised by chronic accumulation of disability and frailty, and associated with increased dependency and reduced reserves. Those who progressively dwindle are poorly catered for by current healthcare systems and would benefit from a coordinated approach to their medical and social care, known as formative care. People with multiple sclerosis (pwMS) may be more likely to progressively dwindle, and may be appropriate targets for formative care pathways.

73.7% of pwMS had a “progressively dwindling” trajectory of dying. This was predicted by those who reach MS disease milestones earlier. 72.5% of pwMS died an MS-related death, which was predicted by an aggressive disease course from onset. Those who progressively dwindled were equally likely to die in hospital as those with other trajectories to death.

The progressively dwindling trajectory of dying is very common in pwMS, and can be predicted by earlier disease milestones. Pathways could target pwMS in these years prior to death, to improve care.

This article brings to the surface the problem with MS research – an enterprise focused on basic science research, or what I call pop science that ignores the immediate needs of our patients. Moreover, frustratingly, what we preach in public is very different from our private thoughts. There is very little impetus to work towards finding solutions for progressive disease. You note, that I don’t mention cure. We should be aiming towards the tipping point; the small changes (Sisyphus effect) that have a big impact (snowball effect).

Progressive dwindling is the progressive chronic illness before death. Broadly speaking, in an aging population four broad trajectories of dying have been described (Bowman and Meyer 2004): 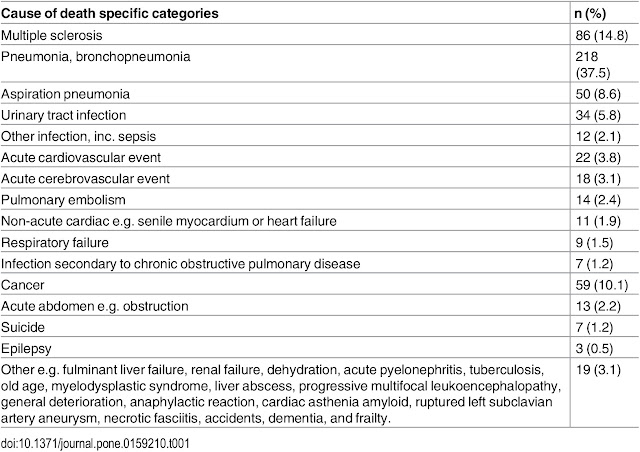 The care pathway for the latter 40% is haphazard at best, focused predominantly at the major centers with access to multidisciplinary teams. There is little in the way of formative care provision in order to improve quality of life. This need is more pressing in MS than any other neurological disorder as it spans most of adulthood.

Martin et al. point out that those who progressively dwindled had an earlier age of onset, progression (earlier achievement of disease milestones suggesting aggressive disease course) and were wheelchair bound.  Moreover, they were more likely to die in hospital (not at a hospice, as in cancers) than in their own residence, which may be interpreted as failure of care.

This research points to a disconnect between active treatment (DMTs) and end of life care in MS with progressive dwindling occurring for several years. This is a serious concern as this research points to at least 74% people with MS having this trajectory before death (NB: this figure may be biased as it is retrospectively collected, and is from a brain bank database). A more formative strategy is needed that can deal early with care planning and readily with complex care needs and increased rates of cognitive disability.