Laquinimod is an oral drug currently being evaluated for the treatment of relapsing, remitting, and primary progressive multiple sclerosis and Huntington’s disease. Laquinimod exerts beneficial activities on both the peripheral immune system and the CNS with distinctive changes in CNS resident cell populations, especially astrocytes and microglia. Analysis of genome-wide expression data revealed activation of the aryl hydrocarbon receptor (AhR) pathway in laquinimod-treated mice. The AhR pathway modulates the differentiation and function of several cell populations, many of which play an important role in neuroinflammation. We therefore tested the consequences of AhR activation in myelin oligodendrocyte glycoprotein (MOG)-induced experimental autoimmune encephalomyelitis (EAE) using AhR knockout mice. We demonstrate that the pronounced effect of laquinimod on clinical score, CNS inflammation, and demyelination in EAE was abolished in AhR-/- mice. Furthermore, using bone marrow chimeras we show that deletion of AhR in the immune system fully abrogates, whereas deletion within the CNS partially abrogates the effect of laquinimod in EAE. These data strongly support the idea that AhR is necessary for the efficacy of laquinimod in EAE and that laquinimod may represent a first-in-class drug targeting AhR for the treatment of multiple sclerosis and other neurodegenerative diseases.

Laquinimod is a pretty rubbish DMT when you look at its effect on inhibiting relapse, but when you looked at MRI, the results looked more promising a slowing nerve damage suggesting that it may be neuroprotective.

How does it work? 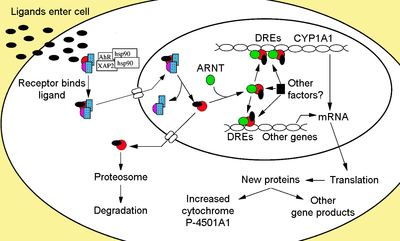 The aryl hydrocarbon receptor is a member of the family of basic helix-loop-helix transcription factors. AHR binds several exogenous ligands such as natural plant flavonoids, polyphenolics and indoles, as well as synthetic polycyclic aromatic hydrocarbons and dioxin-like compounds. AhR is a cytosolic transcription factor that is normally inactive, bound to several co-chaperones. Upon ligand binding to chemicals, the chaperones dissociate resulting in AhR translocating into the nucleus and dimerizing with ARNT (AhR nuclear translocator), leading to changes in gene transcription.
In this study they report that if they removed the AhR from mice and it stops laquinimod from blocking the immune attack which was shown earlier by Berg J, Mahmoudjanlou Y, Duscha A, Massa MG, Thöne J, Esser C, Gold R, Haghikia A. The immunomodulatory effect of laquinimod in CNS autoimmunity is mediated by the aryl hydrocarbon receptor. J Neuroimmunol. 2016 Sep 15;298:9-15. They reported that  the AhR pathway is crucial for the immunomodulatory, but not neuroprotective, efficacy of laquinimod in EAE.

Likewise in the current study, they show that it when removed from white blood cells it blocks the action of laquinimod in EAE but if you remove it from the brain then it doesn’t do much to EAE.

The 1.2mg dosing was stopped because of heart issues but will people believe that the 0.6mg dose is safe.