There is still life in the old dog; interferon-beta does better than expected. #ResearchSpeak #MSBlog

“To be honest, I and others, were surprised at how well MSers did on interferon-beta-1a in both the CARE-MS 1&2 studies; they did much better than expected. The proportion of interferon-treated subjects who progressed in the CARE-MS 1 study was about half of what was expected. I suspect the MSers did so well because they were naive to  treatment and were enrolled very early in the disease course and most of the subjects randomised to Rebif in this study received the new formulation of the drug, which is almost certainly better than the old formulation. For one RNF (Rebif New Formulation) has a lower NAB rate when compared to the old formulation. Rebifers did not do as well in the CARE-MS 2 study as they had to be failing on an existing DMT to be eligible for the trial; in other words treatment failures, or ‘suboptimal responders’ found themselves being randomised back onto Rebif. In the CARE-MS 2, or non-naive , study the Rebif-treated subjects behaved as expected.”

“One thing that is very impressive with alemtuzumab is its impact on end-organ damage, i.e. it ‘normalises’ or ‘pseudo-normalises’ brain volume loss, which doesn’t happen on average with interferon-beta. Now that we are  treating-to-target and moving non-responders off interferons, and other platform therapies, sooner rather than later a large proportion of pwMS are choosing the safer option. Why take the risks of alemtuzumab if you don’t have to? They hedge their bets and keep alemtuzumab in reserve for later. I have no problem with this strategy, but still worry that our biomarkers for monitroing MS are not good enough, which is why we are subjecting more and more of our patients to having lumbar punctures to measure CSF neurofilament levels to see how well they are doing, or not, despite being relapse and MRI-activity free. It is kind of a hedge against alemtuzumab first-line and keeping the more effective, riskier drugs, in reserve. All these arguments will become superfluous if we have a very high-efficacy frugal that was safe. Who wouldn’t choose the latter? It all depends if the latter offered long-term remission or a potential cure or not.  It is only when you start discussing the scenarios and how they play out do you realise how complex the treatment landscape has become in MS. This is even before the first crop of drugs targeting progressive MS are launched.” 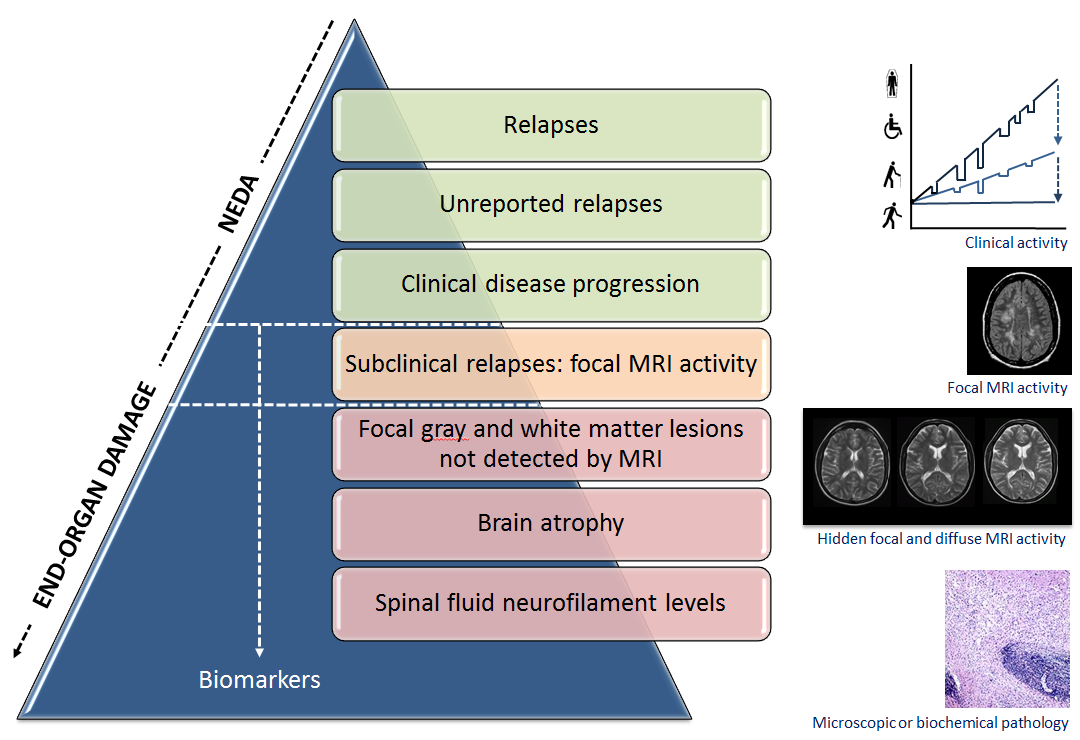 METHODS: The impact of alemtuzumab 12 mg vs SC IFN-β-1a 44 μg on MRI measures was evaluated in patients with RRMS who were treatment-naive (CARE-MS I) or who had an inadequate response, defined as at least one relapse, to prior therapy (CARE-MS II).

RESULTS: Both treatments prevented T2-hyperintense lesion volume increases from baseline. Alemtuzumab was more effective than SC IFN-β-1a on most lesion-based endpoints in both studies (p < 0.05), including decreased risk of new/enlarging T2 lesions over 2 years and gadolinium-enhancing lesions at year 2. Reduced risk of new T1 lesions (p < 0.0001) and gadolinium-enhancing lesion conversion to T1-hypointense black holes (p = 0.0078) were observed with alemtuzumab vs SC IFN-β-1a in CARE-MS II. Alemtuzumab slowed brain volume loss over 2 years in CARE-MS I (p < 0.0001) and II (p = 0.012) vs SC IFN-β-1a.