Enhancing central nervous system (CNS) myelin regeneration is recognized as an important strategy to ameliorate the devastating consequences of demyelinating diseases such as multiple sclerosis. Previous findings have indicated that myelin proteins, which accumulate following demyelination, inhibit remyelination by blocking the differentiation of rat oligodendrocyte progenitor cells (OPCs) via modulation of Protein Kinase Cα. We therefore screened drugs for their potential to overcome this differentiation block. From our screening, tamoxifen emerges as a potent inducer of OPC differentiation in vitro. We show that the effects of tamoxifen rely on modulation of the estrogen receptors ERα, ERβ, and GPR30. Furthermore, we demonstrate that administration of tamoxifen to demyelinated rats in vivo accelerates remyelination. Tamoxifen is a well-established drug and is thus a promising candidate for a drug to regenerate myelin, as it will not require extensive safety testing. In addition, 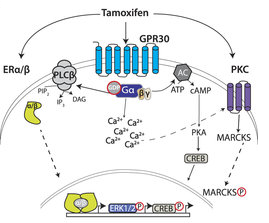 Another protein kinase C which is serine- and threonine-specific protein kinases that can be activated by calcium and the second messenger diacylglycerol. Protein kinase C-alpha (PKC-α) is a specific member of the protein kinase family. These enzymes are characterized by their ability to add a phosphate group to other proteins, thus changing their function. This molecule is involved in the development of oligodendrocytes.

In studying ways to stop blockade of differentiation to oligodendrocytes they found that tamoxifien which blocks oestrogen receptors, could promote remyelination.

One suspects that a number of females with MS, have recieved tamoxifen as part of breast cancer therapy. Has this improved their MS