Click for Paper
How do you describe someone you study.
Please Retweet. May help you get a grant
http://authors.elsevier.com/a/1TvWc7skoepyg9
Paper available until 8 December 2016


How to refer to people with disease in
research outputs: The disconnection between academic practice and that
preferred by people with multiple sclerosis.

2.4 Academic use of descriptors of
pwMS.   As part of a previous study [Baker et al.
2014b], 161 primary research papers concerned with experimental autoimmune
encephalomyelitis studies, which were published over a six-month period in 2012
had been downloaded [Baker et al. 2014b]. These were analysed for which
descriptors were used. In addition the total publication outputs of some MS
specialist clinical journals for the same year were analysed. We searched
papers in: Multiple Sclerosis and Related
Disorders (n=42), Multiple Sclerosis
Journal (n=220) and Multiple
Sclerosis International (n=23). These were read to determine which
descriptors were used.
3. RESULTS
3.1 The preferential descriptor
for someone with multiple sclerosis-The patient perspective
Following surveying the research network of the
Multiple Sclerosis Society there were n=146 responses. The vast majority of
people (about 70% of preferred responses in MSSRN) preferred the use of pwMS, while client was the least preferred (about 2–3% of the preferred
responses) (Table 1; Figure 1). Although MSer
was the second choice by the MSSRN for use in social media (Table 1), it was
clear this was either a most-liked or disliked term, as also found in a
sub-study (n=173) of the original surveys (Baker et al. 2014a) undertaken
(Figure 1). In the survey of the
MSSRN about 49% of responses selected MSer
as a first or second (Preferred) choice, compared to 95% pf responses for pwMS, which was universally preferred,
and 11% of the responses for client, which
was the least preferred (Figure 1). Similarly 34% of responses that selected MSer were the last and second from last
choices (Disliked) compared to 1% for pwMS
or 70% for client (Figure 1). Patient was neither really liked (25% of
response for patient) or disliked (36% of responses for patient) and most
responses (39%) centred on the median preference. However, for use in
scientific papers about 48% of the two most-preferred choices liked the use of patient compared to about 18% who
disliked the use of patient. Again
96% of the top two responses preferred the use of pwMS and 0% of the two least-preferred responses disliked the use
of pwMS. Thus, there were
similarities in the overall types of responses in this new survey compared to
one of the original surveys (Baker et al. 2014a), which addressed the same
questions (Figure 1), although it was clear that pwMS was the preferred choice.
Table1  Descriptors most preferred by
People with MS to describe someone with MS
Anonymous surveys
were undertaken via: a MS blog site (n=174. Baker et al. 2014a); the UK MS
Society Research Network (n=146); NARCOMS (n=518) and the UK MS Register (n=1731).
It was requested that respondents ranked their most preferred descriptor for
being referred to in either the social media or within academic media.  In the MS Blog, MSSRN and NARCOMS surveys
some responses recorded equal preferences. In the MS register survey, only data
from fully competed surveys with a single preference were included in the
analysis (n=1582–1618).
Figure
1.  Preferred descriptors used to describe someone with MS 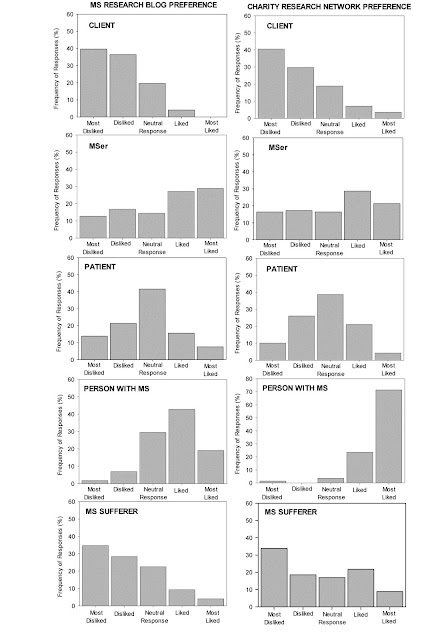 An anonymous survey
was undertaken via (a) an MS research blog (Baker et al. 2014a) and (b) the MS
Society Research Network. It was requested that respondents ranked the quality
of/their most preferred descriptor for being referred to.  The data represent the frequency distribution
or each preference on the research blog (n=173) or preference of how to
describe someone with MS on Social media (n=111–140).
To achieve independent replication, the survey was
performed, hosted and analysed by the UK MS register. There were a
total of 1713 responses to the survey over a two-week period and as per
protocol, only completed responses were included in the analysis. Again there
was a clear preference (54–58%) for the use of pwMS as a descriptor of someone with MS. Incomplete answers in the
other surveys tended to only include 1–3 choices, often with pwMS as the most preferred, and this
figure may therefore slightly underestimate the clear preference for use of pwMS. Likewise, again use of client was an infrequently preferred
choice (6% of responses) (Table 1. Figure 2). MSer again had some preference for use in the social media (Table
1), but was again found to be a term that was either liked or disliked (Figure
2). Similarly, the use of MS sufferer
was either disliked or liked with a trend for the term to be disliked in both
social media and the academic literature (Figure 2).  Whilst MSer
may lack familiarity and thus account for the wide range of preferences
observed (Figure 1, Figure 2), opinion may change as indicated by a more
positive view from pwMS about MSer surveyed from sites that use the
descriptor (Figure 1). Again, most notably in relation to use for social media,
the use of patient was neither liked
nor disliked (Figure 2). However, there was a greater preference for the use of
patient in scientific publications
(Table1; Figure 2). Thus, the trends identified in this large survey reflect
those found in the smaller UK–based surveys (Figure 1; Figure 2).

Figure
2.  Preferred descriptors used to describe someone
with MS on the UK MS Register 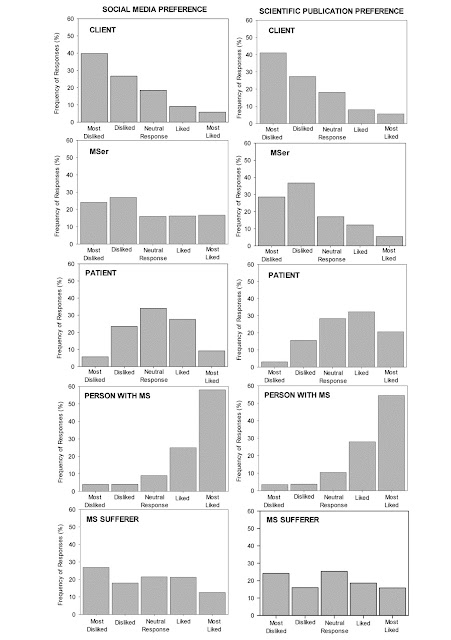 A survey was undertaken via the
UK MS Register. It was requested that respondents ranked their most preferred
descriptor for being referred to in either: Social Media or within Academic
Publications. The data represent the frequency distribution or each preference
from fully completed surveys that used recorded only a single preference
(n=1582–1618).
The web link used by the MSSRN was also hosted by the NARCOMS registry. Again, the preferred descriptor was pwMS for use in both social and academic media (n=518; Table 2;
Figure 3). Similar to surveys by the MSSRN and MSR, here the preference for use
of MSer was wide ranging. Likewise, patient was also neither most liked nor
disliked for use in social media, although again use of patient was considered more acceptable in scientific outputs (Table
1; Figure 3). Client again tended to
be disliked, although there appeared to be a greater acceptance of this
politically-correct term than in the UK-based surveys (Figure 1-3). Likewise,
use of the term sufferer suggested
some national differences in acceptance of descriptor terms (Figure 3). Sufferer was largely disliked in the
North American NARCOMS survey compared to the British MSR survey (Figure
3).  As such, 33.6% of MSR respondents
“liked” or “most preferred” the use of sufferer,
compared to only 14% of people in North America (P<0.001 Chi-squared Test).
The underlying reasons behind this difference require further investigation,
however the United Kingdom has poor access to disease modifying treatments
(Kobelt & Kasteng 2009) and thus may be more likely to feel that they are
suffering. Nevertheless in conclusion, it is clear that pwMS is the universally preferred descriptor of someone with MS for
both social media and academic research outputs.

Figure
3.  Preferred descriptors used to describe someone with MS on the NARCOMS registry 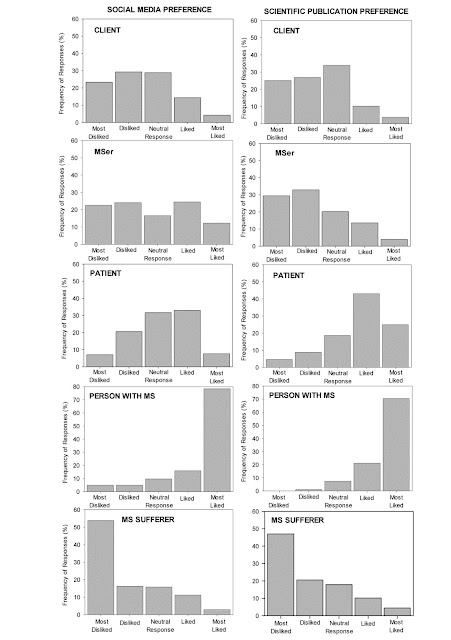 An anonymous survey was
undertaken via the NARCOMS registry website (www.narcoms.org). It was requested
that respondents ranked their most preferred descriptor for being referred to
in either: Social Media or within Academic Publications. The data represent the
frequency distribution of each preference (n=454–509).
3.2 The preferential
descriptor for someone with multiple sclerosis-Academic use
In an attempt to determine
what descriptors MS researchers use (Table 2), we analysed primary research
papers concerned with experimental autoimmune encephalomyelitis (EAE) studies
(n=161), published over 6 months [Baker et al. 2014b]. We also analysed the
total publication outputs of some MS specialist clinical journals for the same
year. In these journals we found that 114 pre-clinical, basic science papers
about EAE described someone with MS. In the vast majority (98%) of cases, patient was used to describe someone
with MS. Additional descriptors were used and MS sufferer or someone suffering from MS was used in 8%
of papers describing pre-clinical studies (Table 2). However, this term did not
appear in the papers in clinical journals examined (Table 1). Basic scientists
sometimes also use MS sufferer, in
their grant applications (unpublished observations). However, it is clear that
academics largely use patient, as this
occurred in 98-99% of published papers (although about a quarter of papers
published in clinically-oriented journals used pwMS (Table 2)).  Therefore
there is a disconnection between that used by MS researchers and that preferred
by pwMS.
Table2  Descriptors used to describe
someone with MS in academic papers
Published papers on pre-clinical studies using animal
models of MS (n=114) and papers published in clinically-related, MS-specialist
journals (n=285) were read and frequency of the descriptor, which may have
contained multiple descriptors within one study, used to describe of someone
with MS was recorded.
4. DISCUSSION
There is clearly a
disconnection between pwMS-preference
and that used by academia, suggesting that change is needed. As lay pwMS are commonly reading and appraising
research grants as part of the PPI process, academics should consider the
sensitivities of how best to refer to someone with MS.  Simple consideration to these issues should be
made during grant and paper-writing, as they are simple to implement. Although sufferer, which is more common in the
tabloid media, was not commonly used in the medical journals, patient has its origins in Latin from
the verb pati, to suffer, and through
the participle form patientem, for
one who is suffering. Patient is
currently defined as a person who is under medical care or treatment and thus
still carries a perhaps an out-dated paternalistic aura. This may need change
as modern medicine evolves and decision-making is becoming a shared experience
between the patient and caregiver. The medical profession has a history of
being adaptive to change in relation to the description of people in their care;
for example, the historical, medical use of: moron (Intelligence Quotient (IQ) <25), imbecile (IQ25-50) and idiot
(IQ 50-70) as a measure of mild, moderate and profound mental retardation
has ceased, as their use is considered politically incorrect and offensive by
society.
Concern has been expressed
that any form of label can be used as a means for division and prejudice. With
the need to have descriptors, the term pwMS
was the preferred method for current description. This should be used in
preference to ‘patient’ and use of both MS sufferer and MS client
should be avoided. Whilst this aspect has been examined here in relation to MS,
it is probably unlikely that the academic use of ‘patient’ and preference for ‘person
with’ to describe any other condition is not the current norm. Therefore, a
simple change in writing style could and should be adopted, if we are to show
that we respect the wishes of the people that we serve and wish to help.
FUNDING: This research received no specific
grant from any funding agency in the public, commercial or not-for-profit
sectors.
ACKNOWLEDGEMENTS: The authors
thank the assistance of the Multiple Sclerosis Society, notably Ms. Mital
Patel. The MS Register gratefully acknowledges the support of the Multiple
Sclerosis Society. NARCOMS acknowledges support from the Consortium of Multiple
Sclerosis Centers, the National Multiple Sclerosis Society and unrestricted
grants from pharmaceutical companies.
CONFLICTS OF
INTEREST: None relevant