Think 4Rs of animal research 3RS + Reading. This may be the easiest way to reduce animal use


Just been on a day trip to Portugal to fill in for profG who was due to present on the Current antibody treatments in MS.

As you can see there were 62 slides for a 30 minute slot.


To do this would fray my mouth.


Trying to present someone elses slides is not always easy. It is abit like looking at Japenese writing..


You can see pictures, or you can see its a shape, but you have no clue what it really means……. unless you read Japanese


However having heard the Monty Python Hungarian Dictionary sketch (https://www.youtube.com/watch?v=G6D1YI-41ao)
…who knows? Google translate could be having a laugh!


Anyway whilst trying to keep the frame work of the talk, I tried to address the aim ” Dissecting out the Mode of Action” and so had spent abit of time coming up with ideas…..

Sorry. What happened in Lisbon…..Stays in Lisbon

I don’t make a habit of loading up my slides…..Why?

Because they often contain unpublished ideas and data.

This doesn’t concern ProfG so much as no one is going to scoop before you have time to publish as you are not going to do quick clinical trial. His co-authors have presented the data at upteem conferences ….

Actually, this is not really true because I have realised there is loads of pharma-related stuff dumped in ECTRIMS and AAN abstracts that never see the light of day in a proper publication. In fact ProfGs slides reminded me of this fact as I worked out they relate to some unpublished study, but that’s another story.

Anyway whilst trying to look at the action of MS drugs, I posed the question what cells drive MS?

You can base this on the mechanism of action of the drugs in MS, but many will base it on what happens in EAE.

But where is the evidence that disease is mediated by T cells? 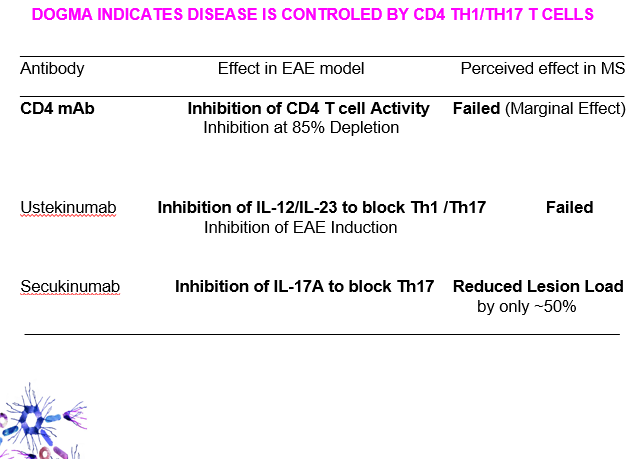 It is there perhaps interesting that we have this paper, talking about blocking interleukin 12 and giving a reason of why Ustekinumab failed in MS. 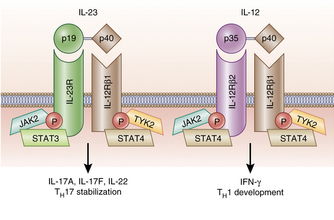 It says that Interleukin 12 was expressed in the CNS, but when you knock it out and transfer in myelin reactive cells that are Th1 or Th17 cells you get EAE, implying that IL12/IL23 is not important.


However, this is what I said in the Lisbon talk relating to Usteinumab anti-IL12/IL-23 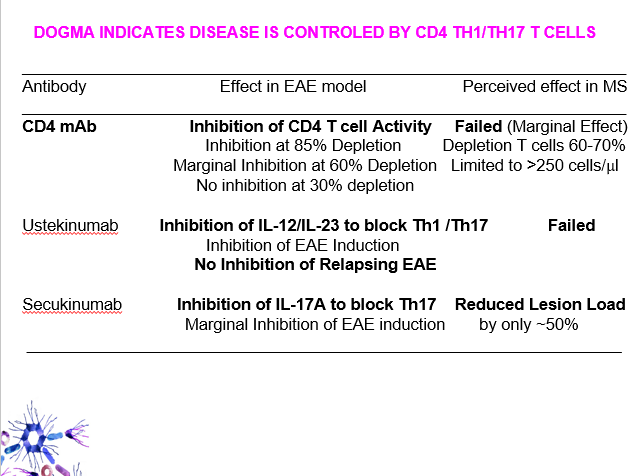 This was the conclusion from the trial in humans

This was a trial done in nearly 250 people..must have cost a few million dollars.

So on face value the evidence for CD4 control of MS is weak from a response to therapy point of view, as alternative arguments can be made for more MS drugs.


Anyway back to the story


I said the treatment worked in the induction of the intial phase of disease in mice, but the data showed that blockade with anti-IL-12/IL-23 did not block relapses…So not surprisingly it did not work in MS.


So not so much that animal models are rubbish, but perhaps humans have either failed to assimilate this knowledge or ignored it.

This damming animal experiment was published a full ten years before the trial. Maybe it needed to be repeated because this is the way information is confirmed
Heremans H, Dillen C, Groenen M, Matthys P, Billiau A.Role of endogenous interleukin-12 (IL-12) in induced and spontaneous relapses of experimental autoimmune encephalomyelitis in mice. Eur Cytokine Netw. 1999;10(2):171-80

So the drug works very well during the induction phase and irradicates disease, with 0/12 getting sick. Do the same before a relapse and a whopping dose still does nothing with 17/21 getting sick which is the same as saline treatment.

So while we are at it, lets explain more about the CD4 depletion in MS. The level of depletion was set a 250 cells/mm3 because below that AIDS was a occuring at ht time. 250 cells/mms is about a 65-70% depletion. Alemtuzuumab deletes CD4  T cells by 95% and after a year they are 70% depleted. In mice 85% depletion blocks EAE, 30% depletion had no effect and about 60% depletion had minial effect in an optimised EAE model. So maybe they did not deplete enough. We will never know the answer because no one is going to do an anti-CD4 trial again.

Next the IL-17 inhibition. In mice the effect of blockage of IL-17 when you take a step back and look at the data is they there is a small inhibition and delay in the intial phase of disease. So not much good.

So is the human data really that much different?

But what will the likes of the RSPCA think about the Ethical Review commitee processes. It looks like the Heremans paper was not cited in the study above was it not seen or just ignored by the authors and the referees. There has been a load of animal studies whicu ultimately is not very 3Rs. Maybe we need 4Rs. Refinement, replacement, reduction and reading.

In some parts of Continental Europe each experiment has to get ethical approval, in the UK the situation different in the project gets the approval. In the UK the process is already so long-winded that pharma gave up the ghost and moved their animal work abroad. Likewise getting ethics to do human work in the UK has become similarly slow and a painful experience. This makes us slow to react when it takes months to follow up on an idea.

So alot of time and money spent (animals, used, pwMS exposed to a test drug, whereas 5 minutes on pubmed may have cautioned against this. Maybe the ethical review process needs abit more reading too:-(