The lack of biomarkers is a major obstacle for investigating myelin repair. We used metabolic incorporation of the choline analog – propargyl-choline (P-Cho) to label and visualize newly synthesized myelin in the CNS of mice induced with experimental autoimmune encephalomyelitis (EAE). We further developed unbiased colocalization analysis to quantify P-Cho incorporation specifically into the myelin. Our findings indicate that P-Cho injection to mice recovering from EAE, either spontaneously or following glatiramer acetate treatment, results in significant elevation of its incorporation into the myelin, offering a novel strategy for assessing remyelination in animal models and the remyelination potential of candidate drugs. 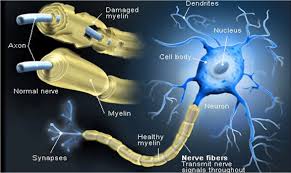 Glaterimer acetate is the drug that I have no clue how it works and it has had more mechanism of action than you can shake a stick at. So todays mechanism is the inference that it is pro-remyelination. but does it really as it was happening any way as they were recovering from an attack. Actually this study is about looking for remyelination, what do you think about taking a dye to light up your myelin?


We have one already it is called fingolimod, this binds to myelin layers really well