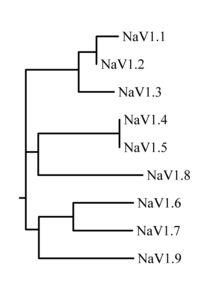 There are nine types of voltage dependent sodium channels. Nav1.6 is a common sodium channel at the node of ranvier which is were there is a gap between the myelin shealths. However during demyelination the sodium channels have to re-distribute along the new to maintain nerve conduction and Nav1.2 becomes expressed. In this study they expressed Nav1.2 into nerves and when there was the an inflammatory attact there was more damage from the inflammatory penumbra and this caused nerve damage.