That’s the logic, but unfortunately data is the bane of a good idea.

We report the results of a randomized, double-blind, placebo-controlled exploratory trial of the chimeric monoclonal anti-CD4 antibody cM-T412 in 71 patients suffering from active relapsing-remitting and secondary progressive multiple sclerosis. Infusion of the antibody produced frequent but usually minor side effects and resulted in a long-lasting reduction of circulating CD4-positive T cells. There was no significant effect on the primary measure of efficacy, the number of active lesions on monthly gadolinium-enhanced MRI over 9 months. Further statistical evaluation provided evidence that the degree of depletion of CD4-positive cells was important with regard to treatment efficacy; using CD4 counts as a covariate there was a statistically significant effect on the number of active lesions over 18 months (p = 0.04). There was a statistically significant reduction of 41% in the number of clinical relapses (a secondary efficacy parameter) after 9 months (p = 0.02), which was still present after 18 months, but this finding may be partly due to physician unblinding. Other secondary efficacy parameters (Expanded Disability Status Scale progression, number of courses of methylprednisolone) were not influenced by anti-CD4 treatment. We conclude that intravenous treatment with the monoclonal antibody cM-T412 in the dosage we used results in a substantial and sustained reduction of the number of circulating CD4-positive cells, but is not able to reduce MS activity as measured by monthly gadolinium-enhanced MRI, and is therefore unlikely to have a beneficial effect on the clinical disease course. We found preliminary evidence suggesting that more aggressive depletion of CD4-positive cells might lead to a more substantial reduction in MRI activity. 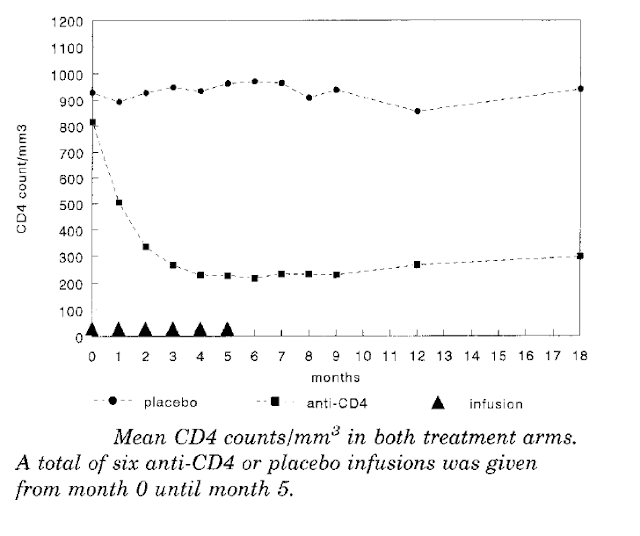 So the hypothesis was put to the test and the experiment above is percieved to have failed…It should have put a major spanner in the works…but we still carry on and the T cells are the bees knees when it comes to autoimmunity and MS……The B cell evangelist says yep that’s what you expect, the T cell evangelist often ignores this and carries on regardless.

However, does it really tell us anything.

At the time, HIV had appeared and AIDS developed when CD4 T cells went below 200 cells/mm3. So the dosing of CD4 was limited to limit dropping below this number.

Was it a complete failure?

As you can read there was a hint it was doing something with more depletion and that was put down to unblinding and that has been the end of the clinical CD4 story.

Well not really…in Cambridge they were a bit more bold and wiped out CD4 T cells below 200cells/mm3 for a long time. Luckily AIDS did not appear, and we know this was effective in MS.

As we have recently reported the 60-65% depletion may not have been enough to control MS, after all it does not control EAE very well and 30% depletion of CD4 T cells is just plain rubbish.

So maybe the CD4 trial was doomed before it started, it would have only taken a few weeks to work out what the level of depletion needed to be in EAE, before embarking on a clinical trial.

Anyway CD4 T cell numbers after alemtuzumab are depleted between 75-90% for 2 year, so does this prove MS is T cell mediated?

To some however, they took a step back and they said this shows us that CD4 T cells doesn’t cause MS. If we look in lesions there are more CD8 than CD4 T cells…is that because there is a virus around?….but it has to be autoimmunity, so it must and off we go an make an autoimmune CD8-dependent autoimmune model, which the CD4 evangelists ignore.

Next step lets destroy the CD8 T cell.  This is may be planned

CD8+ T-cells play a role in the pathogenesis of autoimmune diseases such as multiple sclerosis and type 1 diabetes. However, drugs that target the entire CD8+ T-cell population are not desirable because the associated lack of specificity can lead to unwanted consequences, most notably an enhanced susceptibility to infection. Here, we show that autoreactive CD8+ T-cells are highly dependent on CD8 for ligand-induced activation via the T-cell receptor (TCR). In contrast, pathogen-specific CD8+ T-cells are relatively CD8-independent. These generic differences relate to an intrinsic dichotomy that segregates self-derived and exogenous antigen-specific TCRs according to the monomeric interaction affinity with cognate peptide-major histocompatibility complex class I (pMHCI). As a consequence, “blocking” anti-CD8 antibodies can suppress autoreactive CD8+ T-cell activation in a relatively selective manner. These findings provide a rational basis for the development and in vivo assessment of novel therapeutic strategies that preferentially target disease-relevant autoimmune responses within the CD8+ T-cell compartment.

So this study says we should not deplete them as this will get rid of the anti-pathogen response but lets block them.  This will need a reasonably constant delivery of antibody so a ker-khing approach.


Potential problem is what is going to be the consequence?, If you deplete a suppressor cell is it going to make the MS worse. If you block the receptor it may still block the function. Alemtuzumab depletes CD8 T cells by about 80% at least for 6-9 months so we can get away with it.

However, CD20  antibodies have come along and these deplete B cells. So how do we explain this?


Simple it must be T cells…which sounds abit like the dad(s) in my “Big Greek wedding” or the “Kumars” saying that “Greeks” of “Indians” invented everything.


However CD20 antibodies do inhibit  T cells number, but is 30% depletion going to be significant?

However, we all know it is because we are losing B cell antigen presenting activity or is this a stock answer?