There was a report of severe disease activity that occured within 6 months of the first infusion of alemtuzumab.This responded to B cell depletion.


The first suggestion was this could be a novel CNS autoimmunity, as could occur as discussed by Profg yesterday


However could it be disease reactivation?


This created some contradicting ideas (see post and comments) from TeamG, were we fighting online?


(a) DrK suggested neutralizing antibodies may have blunted the depletion of alemtzumab allowing disease to re-appear
(b) ProfG suggested, however that it could be a return of disease activity after rapid reconstitution.
(c) I also suggested it could be fluke occrance of natural course of alemtuzumab, on which the case reports are based.


Without knowing the depletion in the individuals, it could have been any of the above. Why?


This data from a EMA report from the phase III trials may show us why.


So it is not fighting, but independent thinking aloud.


We don’t always agree, but are prepared to listen and modify our thoughts. Are you?

I have added some boxes/circles around some data from individuals to highlight some points. This shows the white blood cell level in pwMS at various times after alemtuzumab in people with (blue) and without (red) anti-drug antibodies 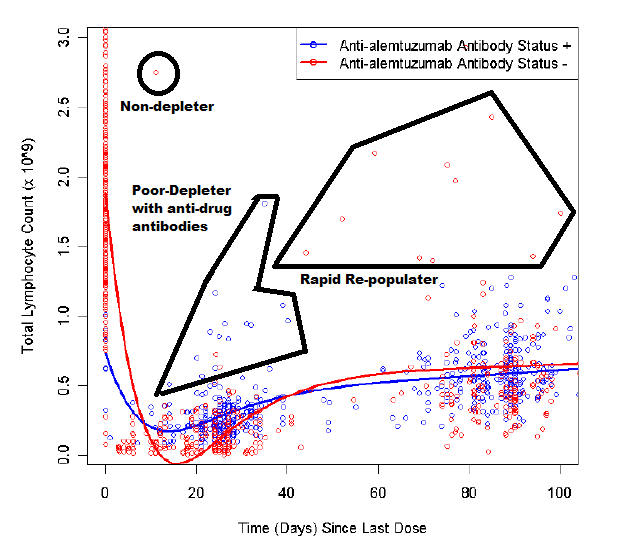 (1) Alemtuzumab does not deplete cells in everyone, so disease could carry on regardless, because there are non-depletors (top left dot).

CD52 is a highly glycosylated (loads of carbohydrates) 12 amino acid long oligopeptide anchored into the membrane by a glycosylphosphatidylinositol (GPI) anchor. Two single-nucleotidepolymorphisms of CD52 were described,rs1071849 (A119G) andrs17645 (A123G).CD52 polymorphism may affect the efficiency of GPI anchor formation and thus may indirectly alter the response to anti-CD52 agents (This needs to be formally shown).


(2) ProfG hinted that as problem occurred after first infusion an influence of neutralizing antibodies, which have not been reported to occur, would be less likely to influnce treatment.

However, following the first infusion of alemtuzmab a whopping 56% (n=486) of people injected with alemtuzumab develop neutralizing antibodies within the first month of treatment.  This is amazing given it is a humanised antibody and that alemtuzumab kills T and B cells.

Whilst the injected antibody is all but gone from the circulation within 15-20 days after first infusion, as it only takes about 6 days to produce an antibody response, at least in mice, hypothectically a neutralizing antibody response (although those found are of low titre=strength), could be generated shortly after the last infusion of the first courtse done over 5 days. This could blunt depletion and allowing rapid repopulation (e.g. see poor depleters with anti-drug antibodies above). They are unlikely to stop depletion altogether as some depletion would occur before antibodies could be formed. This could be more of a problem for the second, third, etc infusions.

(3) There are people who do not produce anti-alemtuzumab antibodies, who have high levels of cells, 2-4 months after infusion. These could be rapid repopulators (alternative was these people were poor depletors and remained poor depletors when assayed  months later.

You have to do some detective work to find this information..Why?